In the course of an enjoyable dinner with Douglas Yazell, Shen Ge and Al Jackson (this was in Houston at the 100 Year Starship Symposium), I learned that the Houston section of the American Institute of Aeronautics and Astronautics was in the process of reprinting, in its entirety, the famous Collier’s series on manned spaceflight. Yazell is editor of Horizons, the bi-monthly publication of the Houston group, and fortunately for all of us, it is both online and free. For me, revisiting these stirring articles will be a priority as each comes out. The July/August issue contains Collier’s for March 22, 1952, first in the series. 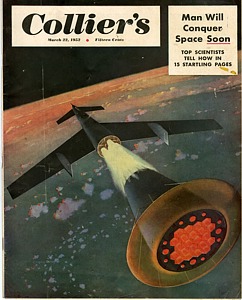 I can only imagine how this issue of Collier’s would have drawn the eye in the typical early 1950s newsstand. The Chesley Bonestell cover shows an enormous winged rocket staging as it soars above an Earth flecked with cloud and crimson with distant sunlight. Evidently we have Scott Lowther to thank for scanning and repairing the entire Collier’s series, a fact he reports on his Unwanted Blog, where he notes that this is the first time these articles have been republished in full-color, high-resolution format since their original release. He does point out that some of the numerous original ads have been edited out — Horizons has replaced these with ads from its Collier’s team members.

According to notes offered by Yazell, Collier’s flagged the upcoming series — to be called Man Will Conquer Space Soon! — with a press release on March 13, 1952, previewing the six articles, totalling 25 pages, that would comprise the first installment of the series. In all, eight issues of the magazine, running into 1954, would offer space articles. Magazine collectors know that UNZ.org has offered the Collier’s series for some time (along with a huge amount of other magazine material), but the UNZ.org scans are low-resolution. The Horizons work restores the series in sharp, gorgeous color.

What an impact this series had on the imagination of readers at the time, for not only were the articles written by major figures in the scientific community, including Wernher von Braun, Willy Ley, Fred Whipple and others, but the magazine made liberal use of the illustrations of Chesley Bonestell in addition to fine (and too often neglected) artwork from Rolf Klep and Fred Freeman, not inconsiderable artists in their own right. It’s the Bonestell most people remember first, though, and many young people went on to have these concepts ingrained through three episodes in the Disneyland TV series that were based on the Collier’s concepts.

Physicist A. A. Jackson goes so far as to say, in this same issue of Horizons, that the Collier’s series may have made the Apollo program a reality by influencing countless young people to pursue careers in spaceflight. It certainly, five years before Sputnik, seized the public imagination, a possibility von Braun’s friend Willy Ley must have foreseen when he took the idea for the project to Cornelius Ryan, then an editor at Collier’s. The series drew liberally from material von Braun had developed for a science fiction novel he called Project MARS: A Technical Tale, whose appendix would become the basis of a space series in a German spaceflight journal. Von Braun’s Mars novel would eventually find an English publisher and it remains in print through the University of Illinois Press. 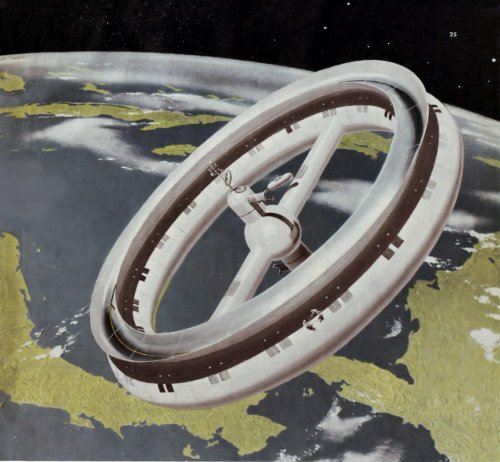 If you want to see what space as a goal felt like in the early 1950s, take a look at these pages, where the excitement is palpable and the technology seemed just around the corner. So many of the tropes of the era’s science fiction films had their genesis here, as witness not just von Braun’s winged rockets but the enormous wheel of a space station being serviced by tiny space taxis, the latter rendered in detailed cross-section by Fred Freeman’s talented brush. Bonestell’s painting of a manned lunar orbiter, with its three bulbous chambers connected by scaffolding, captures the wonder of a first glimpse of the far side of the Moon and a soon to be burgeoning space race caught up in the geopolitics of the Cold War. The Collier’s editors were careful to position space as an arena for a competition the US could not afford to lose. From their introduction:

When the atomic bomb program — the Manhattan Project — was initiated, nobody really knew whether such a weapon could actually be made. The famous Smyth Report on atomic energy tells us that among the scientists there were many who had grave and fundamental doubts of the success of the undertaking. It was a two-billion-dollar technical gamble.

Such would not be the case with a space program. The claim that huge rocket ships can be built and a space station created still stands unchallenged by any serious scientist. Our engineers can spell out right now (as you will see) the technical specifications for the rocket ship and space station in cut-and-dried figures. And they can detail the design features. All they need is time (about ten years), money and authority.

Coming up next in the Horizons reprint series is the October 18, 1952 issue of Collier’s, devoted to the Moon and the attempt to land humans on it. The editorial of that issue notes that an expanded version of the March 22nd articles had already appeared as a book called Across the Space Frontier from Viking Press, a sure indication of the surge in interest the magazine had created. It also mentioned the Third International Congress on Astronautics, which had just met in Stuttgart, where a von Braun paper was read. For many, the Collier’s series took science fiction into the realm of engineering reality, matching vivid space imagery with ongoing scientific research. It was a mind-bending, career-changing journey whose pages repay our continued attention.