Colors of a Living World

Gliese 581d seems more and more to be considered a habitable zone planet, as Siddharth Hegde (Max Planck Institute for Astronomy) and Lisa Kaltenegger (Harvard-Smithsonian Center for Astrophysics) describe it in a new paper. They’re homing in on how to characterize a rocky exoplanet and point to HD 85512b and Gliese 667Cc as well as Gl581d as examples, but they also assume that we’ll be seeing more and more habitable zone worlds as the Kepler mission continues its work, so how we learn more about these planets becomes a big issue.

In the absence of missions like Terrestrial Planet Finder or ESA’s Darwin, which would allow us to analyze an exoplanetary atmosphere for biomarkers, what else can we do to find the places where life exists? Hegde and Kaltenegger look hard at a planet’s color to find the answer. Specifically, they’re interested in what’s known as a color-color diagram, which takes advantage of the fact that an object can be observed at a variety of wavelengths, with a different brightness becoming apparent in each band observed. ‘Color’ in this sense refers to the difference in brightness between different bands, easily plotted on a color-color diagram. 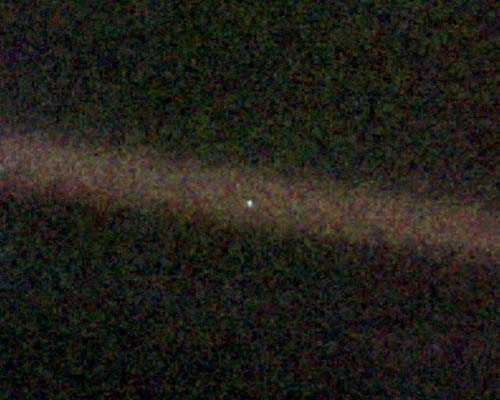 Image: Voyager 1’s famous image of the ‘pale blue dot’ that is our world. Can we use color information from direct images of exoplanets to learn which are most likely to house life? Credit: NASA.

Analyzing an exoplanet in visible light on a color-color diagram can reveal some of the basic physical properties of the planet, assuming cloud cover is not problematic. The new paper homes in on the kinds of environment on Earth that can support extreme forms of life and considers how we might identify equivalent environments on an exoplanet:

Small changes in temperature, pH or other physical and geochemical factors… can lead to such environments being dominant on a potentially habitable exoplanet, what could govern evolution of life. These various “extreme” surface environments on Earth have characteristic albedos in the visible waveband (0.4 µm – 0.9 µm) that could be distinguished remotely. We therefore explore the color signatures that are obtained from the surface environments inhabited by extremophiles as well as test our approach using measured reflection spectra of extremophiles.

Of course, detecting surface features in a reflection spectrum is not itself a detection of life, and the authors are quick to point out that their method is a diagnostic that has to be used in conjunction with a study of the exoplanetary atmosphere. But the paper is an interesting attempt to link the known characteristics of extremophile environments to observational astronomy, one that acknowledges that as we get to the point where we can study distant rocky worlds through actual imagery, we’ll be working at extremely low resolution at the limits of our instruments.

Nonetheless, there is much we can do to distinguish the percentage of the surface covered in water or vegetation or desert, a method that should allow us to prioritize the exoplanets best suited for follow-up spectroscopy. The method builds on prior studies of the vegetation red edge caused by the absorption of red light by photosynthesis, but expands that work to consider different life forms that may live on or below the surface. Piezophiles, for example, thrive under extreme oceanic pressure, while halophiles grow in high salt concentrations.

Although some extremophiles — lichens, bacterial mats and red algae — may be detected by direct albedo measurements, we would have no way of directly detecting many extremophiles in a reflection spectrum. Even so, we can do useful work: The idea here is to identify the kind of surface features that would be common in those environments that supported extremophiles living within them. And the range of characteristic surfaces that can be detected by these methods is large, ranging from water, snow and salt to sand, red-coated algae water and trees.

There are plenty of wild cards here, including the kind of star the planet orbits, which could have a profound effect on the signature of vegetation. As we detect rocky planets around different classes of star, we’ll have to adjust our methods accordingly. From the paper:

…the chlorophyll signature for planets around hot stars, may have a “blue-edge” to reflect some of the high energy radiation in order to prevent the leaves from overheating… Chlorophyll signature for planets orbiting cooler stars, may appear black due to the total absorption of energy in the entire visible waveband such that plants gain as much available light as possible for photosynthetic metabolism… Therefore, the positions of trees, microbial mats and lichens [on the diagram shown in the paper] are only valid for an Earth-analog planet orbiting around a Sun-like star and should be taken as guides. The albedo of vegetation and chlorophyll-bearing organisms for non-Sunlike stars requires further study.

Hegde and Kaltenegger’s paper points toward the first kind of work we’ll be able to perform on an exoplanet in the habitable zone once we’ve been able to acquire a direct image of it. By working with extremophiles, the researchers establish environmental limits for life on our own planet, a useful baseline for our first examinations of other terrestrial worlds. The basic filter photometry in visible light used here can provide a first step in probing these planets by identifying characteristic colors, linking them to environmental niches that support life. We would then await the space-based instruments needed to analyze the atmospheres of high-value targets.

The paper is Hegde and Kaltenegger, “Colors of Extreme ExoEarth Environments,” accepted for publication in Astrobiology (preprint).