Because it’s going to be an interesting week for exoplanet studies (for reasons I’ll talk about soon, though not today), I’ll lead off with some thoughts on eta-Earth, defined as the fraction of Sun-like stars with a planet like Earth orbiting them. We have a lot to learn about the frequency of terrestrial worlds, and as Philip Horzempa points out in a recent article for The Space Review, the image that’s gradually emerging is of fewer ‘Earths’ than Carl Sagan once estimated when he said in the 1980s that half of all stars could have a planet like our own. 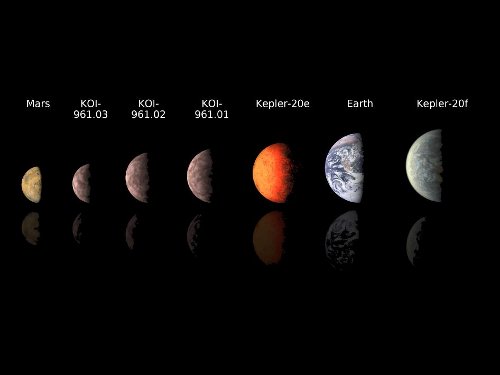 Image: Artists’ concepts of small exoplanets compared to our own planets Mars and Earth. As Kepler continues to hunt, how can we move beyond its findings to learn more about terrestrial planets around much closer stars? Credit: NASA/JPL-Caltech

With Kepler’s continuing datastream and improving ground-based instrumentation, we’re learning more about planet distribution, but Horzempa notes that even now, estimates of Earth analogs have ranged from about 2 percent to as high as 35 percent. He cites John Rehling, who went to work on biases inherent in the Kepler data set, namely that 1) the Kepler data are more complete in regions close to the host star and 2) the transit method detects larger planets more readily than small ones (see Looking Into Kepler’s Latest for more on this analysis, which appeared last March). Rehling’s findings led him to support a low 2% figure for eta-Earth but more complete Kepler data now has him backing off the number. Here’s what Horzempa says on the matter:

[Rehling’s] analysis has shown that the abundance curves for certain planet types, such as super-Earths, do not follow a smooth distribution curve. Rather, there is a peak, followed by a falloff, with increasing distance from the parent star. The distribution curve for Earth-sized worlds shows a positive slope, so far. Therefore, at present the best that can be said about eta-Earth is that it probably has a value of 2–12%. Only an extended Kepler mission will be able to determine the actual fraction of stars that have an Earth orbiting it. A low value for eta-Earth will mean that the search for Earth analogs in nearby solar systems will need to be pursued with vigor, and with multiple approaches.

Kepler, of course, is working with a large field of stars about 2000 light years away, the idea being to gather statistical information that will help us understand the broad trends of planet distribution. The mission has been extraordinarily successful, but it’s interesting to speculate, as Horzempa does, on what missions could now follow up on its findings. The article looks at the Gaia space telescope that should be operational by 2014 as well as the New Worlds sunshade concept that could be deployed for use with the James Webb Space Telescope, but I want to focus on Horzempa’s third mission concept, an ‘Earth’ finder called NEAT.

The Nearby Earth Astrometric Telescope has been proposed to the European Space Agency as a mission that could home in on nearby terrestrial planets in ways Kepler cannot. The idea here is to fly a pair of spacecraft separated by some 40 meters, providing the needed focal length to create high angular resolution. One of the spacecraft carries a 1-meter mirror while the other is a detector probe that collects the focused light onto an array of CCDs. The goal is to detect Earth analogs within 50 light years, with an accuracy of 0.05 microarcseconds for selected targets. Says Horzempa:

The NEAT duo will observe a list of 200 nearby Sun-like stars over several years. It will be able ascertain whether planets down to a mass of 1 Earth, or larger, orbit those stars. In addition, NEAT will be able to survey the solar systems discovered by Kepler, detecting giant planets that were missed by Kepler. These would be planets that did not transit their parent star during the Kepler mission, either because of the “wrong” orbital inclination or because their orbital period is too long. This will help to “fill in” the architecture of those solar systems, allowing a better understanding of how those systems are formed.

As you can see, NEAT would require formation flying in space, something that will demand a precursor experiment that the French space agency CNES has already funded, drawing on progress in formation flying that has been achieved by Sweden’s PRISMA program. The hope of the NEAT planners is to move beyond this experiment to a smallsat follow-up called micro-NEAT, which would put the formation flying algorithms through their paces, though at a separation of 12 rather than 40 meters. Quite a lot of serious work could emerge from such a mission: Horzempa notes that micro-NEAT would be able to detect planets down to one Earth mass for our nearest neighbors, Alpha Centauri A and B. It would also be able to detect larger planets (with a lower mass limit of 10 Earth masses) around the 25 nearest stars.

You’ll want to read all of Horzempa’s essay, which will include a second installment to be published today. With funding for projects like DARWIN and Terrestrial Planet Finder in perpetual limbo, smaller missions that can advance the exoplanet hunt — and help us refine the value of eta-Earth — are the next priority. They will be designed and, let’s hope, fly in an environment enlivened with still more detailed findings from our existing space observatories as well as instruments on the ground that reveal planets in the habitable zone of their stars.

NEAT was submitted as an answer to the call for proposals for M-class space missions in ESA’s “Cosmic Vision 2015-2025” plan. For more, see Mablet et al., “High precision astrometry mission for the detection and characterization of nearby habitable planetary systems with the Nearby Earth Astrometric Telescope (NEAT),” available online. The NEAT proposal summary is also available. A NEAT workshop was held in November of 2011 in Grenoble, France.

Next post: Circumbinary Planet in a Four Star System