Continuing with what promises to be a seriously interesting week in exoplanet studies, I want to home in this morning on PH1, a planet that reminds us how much the public has become involved in ongoing science thanks to the widespread distribution of computer power. As presented at the annual meeting of the Division for Planetary Sciences of the American Astronomical Society in Reno (NV), the finding pairs volunteers working with the crowdsourced Planet Hunters project with an international team of professional astronomers led by Yale University’s Meg Schwamb.

The volunteers — Kian Jek of San Francisco, California, and Robert Gagliano of Cottonwood, Arizona — were the first to spot the telltale lightcurve of a transit, which was then confirmed by astronomers using the Keck instruments at Mauna Kea (Hawaii). What the investigation uncovered was a gas giant about 6.2 times the radius of the Earth, putting it into Neptune-territory. But what really flags the attention is the fact that PH1 orbits within a four-star system. The planet is on a circumbinary orbit of two stars — with mass of 1.5 and 0.41 times the Sun respectively — every 138 days. At about 1000 AU in the same system is a second binary pair orbiting the first.

The inner pair comprise an eclipsing binary tagged KIC 4862625, located in the Kepler field and examined by the Planet Hunters duo using the first six quarters of publicly available Kepler data. PH1 is the seventh conﬁrmed transiting circumbinary planet, giving us new information about the orbital configurations of multi-star planetary systems. From the paper: 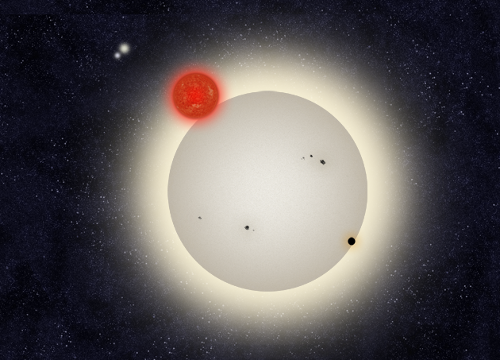 Image: A family portrait of the PH1 planetary system: The newly discovered planet is depicted in this artist’s rendition transiting the larger of the two eclipsing stars it orbits. Off in the distance, well beyond the planet orbit, resides a second pair of stars bound to the planetary system. Credit: Haven Giguere/Yale.

As for Planet Hunters, the Yale researchers believe the ‘citizen science’ model may continue to play a role in gaining new information about such systems:

PH1 was found serendipitously by Planet Hunters volunteers examining the light curves of the known Kepler eclipsing binaries. The discovery of PH1 highlights the potential of visual inspection through crowd sourcing to identify planet transits in eclipsing multistar systems, where the primary and secondary eclipses of host stars make detection challenging compared to planets with single host stars. In particular, Planet Hunters may exploit a niche identifying circumbinary planetary systems where the planet is not sufficiently massive to produce measurable eclipse timing variations that would be identiﬁable via automatic detection algorithms.

Co-author Jerome Orosz (San Diego State) echoes the sentiment, saying that “Many of the automated techniques used to find interesting features in the Kepler data don’t always work as efficiently as we would like.” Putting many sets of eyes on the data becomes a potent tool when linked up with the professional instrumentation and judgement needed to confirm the find. For more, see this Yale University news release. The paper is Schwamb et al., “Planet Hunters: A Transiting Circumbinary Planet in a Quadruple Star System,” submitted to The Astrophysical Journal (preprint).