Centauri B: Targets and Possibilities

Voyager 1, now 17 light hours from Earth, continues to be my touchstone when asked about getting to Alpha Centauri — and in the last few days, I’ve been asked that question a lot. At 17.1 kilometers per second, Voyager 1 would need 74,000 years to reach the blistering orb we now believe to be orbiting Centauri B. Voyager 1 is not the fastest thing we’ve ever launched — New Horizons at one point in its mission was moving with greater velocity, though no longer, and the Helios II Solar probe, no longer functional, reaches about 70 kilometers per second at perihelion. But Voyager 1 will be our first craft to reach interstellar space, and it continues to be a measure of how frustratingly far even the nearest stars happen to be.

Cautionary notes are needed when a sudden burst of enthusiasm comes to these subjects, as it seems to have done with the discovery of Centauri B b. What we need to avoid, if we’ve got our eyes on long-term prospects and a sustained effort that may take centuries to succeed, is minimizing the challenges of an interstellar journey. Making it sound like a simple extension of existing interplanetary missions would create a public backlash once the real issues become clear. Better to be straightforward, to note the vast energy budget needed by an interstellar mission, the conundrum of propulsion, the breathtaking scope of the distances involved. 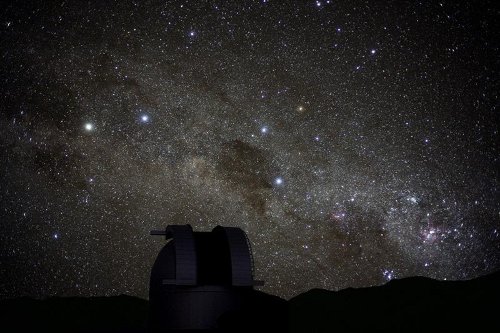 Image: The night sky above Mt. John Observatory in New Zealand, where a second active hunt for Alpha Centauri planets has taken place. This and a third Centauri project, Debra Fischer’s work at the Cerro Tololo Inter-American Observatory (Chile), give us hope that Centauri B b may be confirmed in the near future. Note the Southern Cross (just above and to the right of the dome), with Alpha and Beta Centauri the two stars to its left. Alpha Centauri (the leftmost bright star) is a triple system made up of Centauri A, Centauri B and Proxima Centauri. Credit: Fraser Gunn.

Marc Millis told Alan Boyle just after the Centauri B b discovery that manned missions were almost certainly not going to be our first attempts to reach the stars. We can work out scenarios where the global economy grows to the point where a civilization moving into the Solar System can afford to build huge laser installations that could propel a lightsail to perhaps ten percent of the speed of light. Get up to that kind of velocity and you make the Centauri crossing in less than half a century, but only for a flyby. Deceleration is another matter, and even if, as Robert Forward showed, there may be ways to decelerate a lightsail at destination, the mission then extends to at least a century and, given our assumptions, perhaps a good deal more.

So we’re likely talking about robotic probes which, given the development time needed to create and launch them, would probably be ‘manned’ by an extremely sophisticated artificial intelligence. In the same article, astrobiologist Dirk Schulze-Makuch (Washington State) told Boyle that an interstellar mission could be seen as part of a roadmap that developed incrementally:

“The roadmap that we have takes a grand perspective, with the objective to scout out our own solar system first, put a permanent human presence on Mars, look at asteroids, and really work first on our own solar system before we take the next step to an extrasolar planet.”

And as I’ve speculated here on more than one occasion, a developmental model like this may take a more gentle trajectory than we’ve previously assumed. A civilization that masters living in nearby space by developing large habitats that can house thousands may eventually branch off from its Earthbound human roots to thrive in the places between planets and stars. Generations may indeed live and die in such habitats not because of a specific mission constraint but as a matter of choice. And if this occurs, a mission to a nearby star may be an organic extension of space living, its destination motivated by long-term curiosity rather than any plans of settlement.

Centauri B b is hardly a compelling target for any kind of mission, but the enthusiasm it has already generated points to the latent exploratory impulse that may be triggered if we do find a habitable world somewhere among the Centauri stars. In another recent piece on the discovery, Ian O’Neill quotes Robert Freeland, deputy project leader for Project Icarus, the ongoing re-design of the 1970s Project Daedalus starship study. Like me, Freeland is pondering how the public would react to the next round of Centauri discoveries, assuming such are made:

“I have often imagined the day when scientists directly image an Earth-like extra-solar planet. We would be able to determine the planet’s atmosphere and surface temperature from its spectrum, and we would thus know whether it might be able to sustain life as we know it. I suspect that once such a discovery hits the news, people worldwide are going to demand that we send a probe to determine whether the planet has life (of any type) and/or could be suitable for human habitation. If the latter proves true, then a manned mission would eventually follow.”

A lot can happen, of course, between the surging interest such a discovery would create and the realization of how tough a mission like this would be. But Freeland is surely right that Centauri B b is a warning shot that tells us we’ll be finding much more about this system in the not so distant future. While it is true that the HARPS spectrograph that made the recent discovery possible is capable of detecting planets no smaller than four Earth masses in the habitable zone of Centauri B, Stéphane Udry (Observatoire de Genève) said in the recent news conference that ESO was already working on technologies that would extend that range down to one Earth mass. 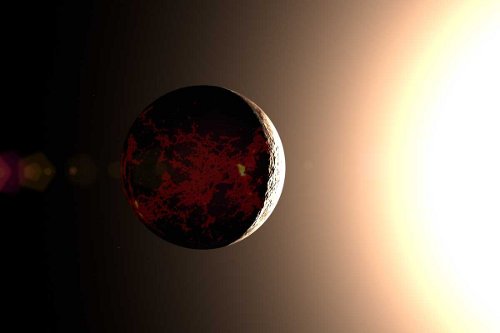 Image: An artist’s impression of Centauri B b. Credit: Adrian Mann.

Meanwhile, supported by the Planetary Society, Debra Fischer (Yale University) has been working on a separate search for Alpha Centauri planets, one she recently discussed with Bruce Betts. Fischer notes how faint the 0.5 m/s signal seen by the Geneva team is and points to the need to confirm the discovery. Her team, which has been talking with the HARPS researchers, has been analyzing its own dataset and running simulations to test detectability. Says Fischer:

“Our best data set for aCenB begins in June 2012, when we completed some stability upgrades to the new spectrograph (CHIRON) that we built for the 1.5-m CTIO telescope (with NSF MRI funding). Our precision since the upgrade matches the HARPS precision, but yields a 5-month string of data compared to the 5-year time baseline of data from HARPS.”

“We are in an excellent position to follow-up, but that will likely require an intensive search over the prospective orbital period of 3.24d when the star rises again in January 2013.”

Would the discovery of a habitable zone planet around Centauri B, perhaps occurring some time in the next ten years, have the effect Freeland believes it would? Given the state of our technology, we couldn’t get off an interstellar mission any time soon, but I would like to think that such a finding would be a spur to research that might turn interstellar studies from a back-burner activity into a more visible and better funded effort. We need to advance the technologies that will help us with in-system projects, from long-term life support to advanced robotics. And we can hope that eventually, a Solar System-wide civilization may emerge that will have the strategies and the energy budget to consider a close-up look at such a distant, tantalizing target.

Next post: Deck Hands for a Four Decade Journey