Opening Minds to the Stars

When it comes to experiencing the night sky, there are times when mathematics fades away and poetry comes to the fore. Witness these lines from John Milton’s Paradise Lost:

A broad and ample road, whose dust is gold,
And pavement stars, as stars to thee appear
Seen in the galaxy, that milky way
Which nightly as a circling zone thou seest
Powder’d with stars.

The lines bring back a crisp fall night in the Adirondacks when my wife, my daughter and I were crossing Lake George in a small boat. I’ve seen the Milky Way from many places but never has it seemed so striking as that night, perfectly framed by the surrounding hills, and Milton’s word ‘powder’d’ has the scene exactly right, for the stars seemed like a fine dust interspersed with jewels. The closest photo I’ve seen that captures a scene like this is a spectacular image taken over the snowy cliffs of Creux du Van near Neuchâtel, Switzerland that I found in a new book from the Smithsonian called Universe: The Definitive Visual Guide. 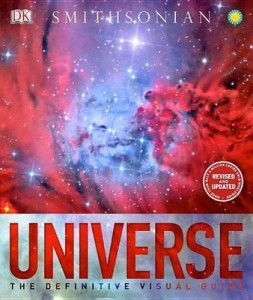 Every year as we start to get into holiday season I look around for a volume something like this. The challenge faced by those of us who try to communicate something of the scale of the universe — the distances between stars and galaxies themselves — is that students don’t leave high school and even college with a real sense of what makes the interstellar void so difficult to cross. Sometimes a well-placed brick of a book laced not only with the best astrophotography but succinct explanations of astronomical phenomena can light a fire in a young mind and awaken awe in the cosmos. Paging through it can also be a useful restorative to anyone’s whose sense of wonder has become jaded.

Martin Rees (University of Cambridge), former president of the Royal Society and now Astronomer Royal, is general editor for this 528 page coffee-table volume, working with a carefully chosen team of writers and astronomers that includes Iain Nicolson, whose 1978 book The Road to the Stars put many of the evolving concepts of interstellar flight in front of the public. Universe works through the basic concepts of astronomy and then moves into a grand tour that encompasses local stars, the Orion Arm and fans out into the galaxy, with an attention to scale that should take the breath of attentive newcomers away when galaxy after galaxy swings into view and the subject turns to clusters of galaxies and their astounding architecture.

Leave this massive but inviting book open in your living room and watch people page through it. The box-like explanations are succinct, just enough to get someone up to speed on red and blue shift, for example, to make sense of Hubble’s findings. The treatment of special and general relativity is compressed into six highly illustrated pages that get across the basic concepts non-mathematically. The text throughout is beautifully supported with diagrams and photography, visual flashcards that invite you to brush up on your facts here and there depending on where you happen to open the book. Thus this about distance considered in terms of the speed of light:

The expansion of space complicates the expression of distances to very remote objects, particularly those that we now observe as they existed more than 5 billion years ago. When astronomers describe the distance to such faraway objects, by convention they use the ‘lookback’ or ‘light-travel-time’ distance. This is the distance that light from the object has travelled through space to reach us today, and it tells us how long ago the light left the object. But because space has expanded in the interim, the distance of the galaxy when the light began its journey towards Earth is less than the lookback distance. Conversely, the true distance to the remote object (called the ‘comoving’ distance) is greater than the lookback distance. These distinctions need to be remembered when, for example, a galaxy is stated as being 10 billion light-years away.

I mention that one in particular because it’s admirably concise and supported with useful artwork on the over-sized pages of this volume, as are so many concepts people acquainted with the field begin to think of as routine but which laymen, coming to them for the first time, can find confusing. Thus current thinking on the Big Bang is beautifully illustrated in ways that give a visual sense for cosmic inflation, the separation of forces, the emergence of matter and the ignition of the first stars. For those with a telescope, a large section on the constellations and a series of sky charts help relate the astrophysical objects under discussion to their place in the night sky.

When I was growing up, the best photography of the heavens was available mostly in black and white images from places like the Palomar Observatory, then working without benefit of adaptive optics. The space-based telescopes whose work graces these pages were obviously not available then. I still have many books from the time and remember how those images thrilled me. Today, a glance at a double-page spread of the ‘Pillars of Creation’ in the Eagle Nebula or the almost surreal beauty of the globular cluster M9 as seen from space could easily turn a young person with a science fictional bent — or perhaps a poet — toward a career actively pursuing deep space topics. This lovely volume should wind up as a carefully placed holiday gift, assuming that you, as do I, have a particular relative or friend whose eyes are begging to be opened to the stars.