At 42 light years from Earth, the star HD 40307 is reasonably within the Sun’s neighborhood, so the news of a potentially habitable planet there catches the eye. HD 40307 is a K-class dwarf, one previously known to be orbited by three super-Earths — with masses between the Earth and Neptune — that are too close to the star to support liquid water on the surface. Now we have the discovery, announced in a new paper in Astronomy & Astrophysics, of three more super-Earth candidates found by digging into data from HARPS (the High Accuracy Radial Velocity Planet Searcher) and HIRES (the High Resolution Echelle Spectrograph).

Mikko Tuomi (University of Hertfordshire) and team put a new software tool called HARPS-TERRA to work on the archival data that allowed them greater precision in filtering out false positives from stellar activity. Says Tuomi:

“We pioneered new data analysis techniques including the use of the wavelength as a filter to reduce the influence of activity on the signal from this star. This significantly increased our sensitivity and enabled us to reveal three new super-Earth planets around the star known as HD 40307, making it into a six-planet system.”

The outermost planet of the six is the one to watch. HD 40307’s habitable zone lies between 0.43 and 0.85 AU. With an orbital semi-major axis of 0.60 AU, candidate planet HD 40307 g is in the sweet spot, receiving about 62 percent of the radiation the Earth receives from the Sun. The paper notes that while that level of radiation may seem low as compared to the Earth, our planet actually lies fairly close to the inner boundary of the Sun’s habitable zone. 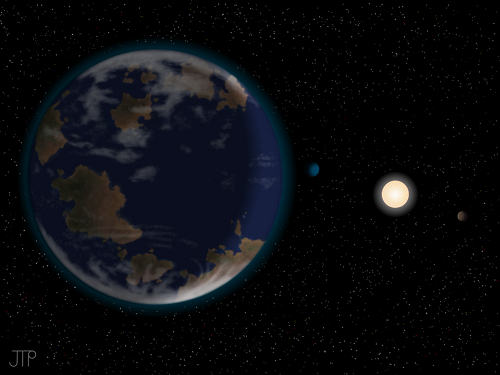 Unfortunately, we aren’t likely to get any help from transits here, as previous attempts to detect the inner candidate HD 40307 b have been unsuccessful, and the likelihood of a transit by HD 40307 g is considered to be about 0.6 percent. But the planet is enticing. From the paper:

As is the case with the previously reported planets in the HZs of nearby stars, additional observational information is necessary – on top of conﬁrming the planetary nature of the three new signals we report in this work – to decide if HD 40307 g indeed can support water on its surface. In the meantime, and given that it would be a rather massive object for a telluric planet, detailed climatic (e.g. Barnes et al., 2012) and planetary interior simulations (e.g. Korenaga, 2010; Stein et al., 2011) can be used to estimate its suitability for supporting liquid water and, perhaps, life. Unlike the other previously reported candidate habitable planets around nearby M dwarfs (e.g., GJ 581 and GJ 667C), HD 40307 g is located farther away from the central star and, like the habitable zone planet candidate Kepler 22b (Borucki et al., 2012), it should not suﬀer from tidal locking either (Kasting et al., 1993; Barnes et al., 2009b).

HD 40307 g has a minimum mass of about 7 Earth masses, and according to the researchers, it is so deeply nested inside the habitable zone that even with a slightly eccentric orbit, it would remain inside the HZ for a full orbital cycle. In a University of Hertfordshire news release, researcher Guillem Angla-Escude notes that “The star HD 40307, is a perfectly quiet old dwarf star, so there is no reason why such a planet could not sustain an Earth-like climate.” Meanwhile, planet formation theorists will have plenty to work with as they add the system around HD 40307 into the exoplanet mix. Its architecture is different enough from our own — with the tight packing of six planets inside 0.60 AU — that a range of formation possibilities come into play as we ponder how Earth-mass objects eventually emerge in their star’s habitable zones.

Moreover, whereas the interesting and potentially habitable Kepler 22-b is located about 200 pc from Earth, HD 40307 is close enough that the star-planet angular separation should be workable for future missions like ESA’s Darwin or NASA’s Terrestrial Planet Finder, assuming these find their way through budget hurdles and eventually get built. If HD 40307 g can be confirmed, we could be talking about the first habitable planet to be observed at this level.

A Digression on Delayed Missions

Let’s pause on this for a moment as I recall Michael Lemonick’s recent op-ed in the Los Angeles Times. Lemonick, whose new book Mirror Earth is just out (Walker & Company, 2012), runs through what was supposed to have happened with space-based observatories. By the early 2000s, the Space Interferometry Mission was going to bring new precision to exoplanet finding, while the James Webb Space Telescope, then planned as bigger and more powerful than the one under construction, was supposed to be launched and operational by 2007. Terrestrial Planet Finder, designed to image those ‘mirror Earths,’ was banked for 2020.

As of today, however, SIM has been canceled; the smaller, less powerful Webb will launch by 2018 perhaps; and the TPF has been put on the back burner, maybe permanently. These disappointments have partly to do with NASA’s ever-shrinking science budget, but SIM and TPF were also torpedoed by internal squabbling among scientists who disagreed about the best designs and about whether SIM was vital or unnecessary.

To be sure, Lemonick credits the ‘scrappy ingenuity’ that has produced not just Kepler but refinements to Earth-bound radial velocity methods of the kind that produced Centauri B b, not to mention the citizen scientists pooling their transit skills on planethunters.org. We can hope the setbacks are only temporary, but it gives me pause to think how many discoveries we could be making — including not so far off imaging of a planet like HD 40307 g — if missions like these and ESA’s Darwin had a stable line of development.

But back to HD 40307 and its planets. The researchers review current thinking on the few habitable zone planets we’ve found thus far and measure HD 40307 g against them. GJ 581 d and HD 88512 b orbit at the outer edge of the habitable zone of their stars, although mechanisms involving clouds of CO2 or water could create habitable models [NOTE: See andy’s comment below, correcting me about HD 85512 b]. Both Kepler-22 b and GJ 667C c orbit well within the habitable zone, with Kepler-22 b possibly a small version of Neptune rather than a rocky planet with a solid surface. The paper continues:

…the precise natures of GJ 667C c and HD 40307 g are unknown and they could also be scaled down versions of Neptune-like planets with thick atmospheres and solid cores. Compared to the candidates orbiting nearby low-mass stars (GJ 581 d, GJ 667C c, HD 85512 b), HD 40307 g is not likely to suﬀer from tidal-locking – which improves its chances of hosting an Earth-like climate. Like for the other HZ candidates, it is not yet possible to determine its physical and geochemical properties and a direct-imaging mission seems to be the most promising way of obtaining observational information on these properties.

So the work ahead is first to verify the existence of the three new planets and get a better fix on the orbits and minimum masses of each. The paper points out that the dense dynamical packing in this system means that the planet candidates around HD 40307 are likely to have masses close to their minimum values, but additional measurements are clearly in the cards.