While Rod Hyde, Lowell Wood and John Nuckolls were working on laser-induced fusion to drive a starship back in 1972, the range of options for advanced propulsion continued to grow. One we haven’t talked about much in these pages is the use of gravitational slingshots in exotic settings. We’re used to the concept within the Solar System because spacecraft like Voyager and Galileo have used a ‘slingshot’ around a planet to alter course and accelerate. But interstellar visionaries like Freeman Dyson have looked further out to imagine other uses for such techniques. 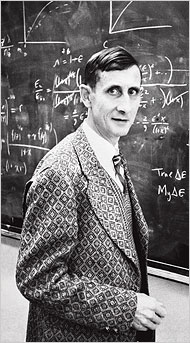 In a 1963 paper, Dyson speculated on how an advanced civilization might use a binary star system made up of two white dwarfs. Send a spacecraft into the system for a close pass around one of the stars and, depending on the mass and orbital velocity of the stars, it is thrown out of the binary system at velocities as high as 3000 kilometers per second. But Dyson took the idea even further. His paper, which appeared as a chapter in a book called Interstellar Communication (New York: Benjamin Press, 1963), described not just white dwarfs but the creation of a binary neutron star system as an engineered launch platform.

I can’t, in a quick search of the office this morning, find my copy of this book, but David Darling has the numbers in his Encyclopedia of Science. Two neutron stars, each with a diameter of 20 kilometers and a mass of one solar mass — and a combined orbital period of 0.005 seconds — would provide a departure velocity of 0.27 c, which works out to 81,000 kilometers per second. The concept has worked its way into the literature as the ‘Dyson slingshot,’ an artifact produced by an advanced civilization for flinging things from star to star. See Gregory Benford’s The Stars in Shroud (1978) for possible uses of such a system.

All this was in the air at a time when the very existence of neutron stars was in doubt (it would not be until five years later that Jocelyn Bell and Antony Hewish discovered the first radio pulsars, for which Hewish shared the Nobel Prize). Why get into all this in a book titled Interstellar Communication? Because Dyson also noted that a close binary system of neutron stars would decay in short order until the two components plunged into each other, creating a burst of gravitational waves that could be detected over millions of parsecs. Dyson thought it worth looking for events like this using some form of gravitational wave detection instrument.

But back to gravitational maneuvers to speed up spacecraft. Writing in the Journal of the British Interplanetary Society in 1972, German propulsion engineer Krafft Ehricke proposed using a gravitational slingshot to push a spacecraft out a tenth of a light year from the Sun. These days the plan would sound more familiar than it did when Ehricke wrote it: The probe would be sent first to Saturn for a propulsive maneuver as it moved behind the planet that would send it into a retrograde orbit, taking it near Jupiter for another slingshot toward the Sun.

Ehricke’s vehicle would close to within 1.6 million kilometers of the Sun, being flung around it and accelerated to 600 kilometers per second, which would take it to 6320 AU in 50 years. The engineer thought a mission like this could be useful as we learn about the interstellar medium and the outer system, but he believed 600 kilometers per second was about as much as he could wring out of the method. Actual interstellar missions would need breakthroughs of the kind Hyde, Wood and Nuckolls were examining at Lawrence Livermore, or perhaps antimatter.

I’m not clear on whether Ehricke was aware of the 1960s work of Robert Forward, George Marx (Roland Eötvös University, Hungary) and J.L. Redding (Bishop’s University, Quebec) on laser beaming to large space-based sails, but I haven’t yet found any reference to it in his work. He did, however, develop expansive ideas about our species’ role in the cosmos that I’ll be looking at shortly.