Makemake and the Naming of Names

Now that we have vast numbers of Kuiper Belt Objects assumed to be orbiting outside the orbit of Neptune, not to mention possible Oort Cloud interlopers (Sedna may be one of these), the question of names gets ever more interesting. Great entertainment awaits, as witness the KBO known as 2005 FY9. Discovered not long after Easter in 2005, it quickly gained the nickname Easterbunny. It’s now, after several years, been re-christened Makemake, but I like what Mike Brown, who led the discovery team, has to say about this dwarf planet and its earlier monicker:

Three years is a long time to have only a license plate number instead of a name, so for most of the time, we simply referred to this object as “Easterbunny” in honor of the fact that it was discovered just a few days past Easter in 2005. Three years is such a long time that I think I’m going to have a hard time calling Makemake by its real name. For three years we’ve been tracking it in the sky, observing it with telescopes on the ground and in space, writing proposals to observe it more, writing papers based on what we see, and, all the while, we have just called it – at least amongst ourselves – Easterbunny. If you came in tomorrow and told me that from now on my daughter – who also just turned three – was to suddenly be called something new, I would have a hard time with that, too.

Most parents would, I imagine. Meanwhile, Makemake is itself an interesting name which for some time now has had sanction from the International Astronomical Union. Rapa Nui, also known as Easter Island, is home to the mythology from which the god Makemake — the creator of humanity and the god of fertility — springs. Brown says the name is pronounced ‘maki-maki,’ and in the absence of any background in Polynesian languages, I’ll take his word for it. Interestingly, Brown goes on to say that coming up with a permanent name for Easterbunny was his biggest naming challenge. This really does get entertaining:

Easterbuuny? It’s orbit is not particularly strange, but it is big. Probably about 2/3 the size of Pluto. And it is bright. It is the brightest object in the Kuiper belt other than Pluto itself. Unlike, say 2003 EL61, which has so many interesting characteristics that it was hard choosing from so many different appropriate name (more on this later), Easterbunny has no obvious hook. Its surface is covered with large amounts of almost pure methane ice, which is scientifically fascinating, but really not easily relatable to terrestrial mythology. (For a while I was working on coming up with a name related to the oracles at Delphi: some people interpret the reported trance-like state of the oracles to be related to natural gas [methane] seeping out of the earth there. After some thought I decided this theme was just dumb.)

Although it’s tempting, I won’t quote the whole piece, but send you to Brown’s lively What’s In a Name? for more. Clearly, the Easter connection linking the object’s discovery with Easter Island was the deciding issue, and it’s one that lets Makemake join other KBOs in having a name that fits its station. Eris, for example, was the Greek goddess of discord, a fitting name for the object causing a planetary re-juggling that resulted in Pluto’s demotion to ‘dwarf planet.’ Orcus was an Etruscan counterpart to Pluto, and with its large moon, Orcus does resemble Pluto in many ways (some call it the ‘anti-Pluto’). Sedna was an Inuit goddess of the sea, a cold name for this incredibly distant world with the highly elliptical orbit.

As to its own composition, Makemake is about ⅔ the size of Pluto, with many astronomers expecting to find an atmosphere there. But observations with European Southern Observatory instruments in Chile have used a stellar occultation to determine that Makemake has no atmosphere of any significance. The occultation was highly useful — Makemake is a difficult object because of its lack of moons and the distance involved, and the new work not only offers up information about the lack of atmosphere but also helps us determine its size more accurately, as well as allowing estimates of its density. We also get an albedo measurement showing a reflectivity higher than Pluto’s but somewhat less than that of dwarf planet Eris. 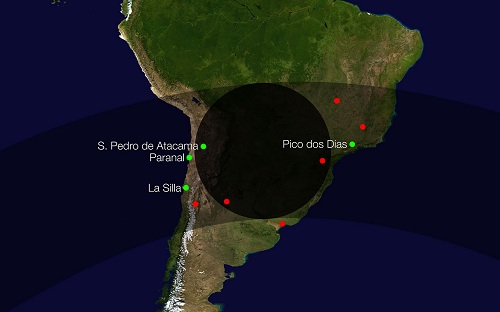 Image: This diagram shows the path of the shadow of the dwarf planet Makemake during an occultation of a faint star in April 2011. Several sites in South America, including ESO’s La Silla and Paranal Observatories, saw the star disappear briefly as its light was blocked by Makemake. This dwarf planet is about two thirds of the size of Pluto, and travels around the Sun in a distant path that lies beyond that of Pluto, but closer to the Sun than Eris, the most massive known dwarf planet in the Solar System. Makemake was expected to have an atmosphere like Pluto, but the new occultation data show that this is not the case. Credit: ESO/L. Calçada.

“As Makemake passed in front of the star and blocked it out, the star disappeared and reappeared very abruptly, rather than fading and brightening gradually. This means that the little dwarf planet has no significant atmosphere. It was thought that Makemake had a good chance of having developed an atmosphere — that it has no sign of one at all shows just how much we have yet to learn about these mysterious bodies. Finding out about Makemake’s properties for the first time is a big step forward in our study of the select club of icy dwarf planets.”

These observations, combined with earlier work, indicate that Makemake’s density is 1.7 ± 0.3 grams per cubic centimeter. From this, the team infers that the object is in the shape of a sphere somewhat flattened at the poles, with axes of 1430 ± 9 kilometres and 1502 ± 45 kilometres. This ESO news release offers more details.

The star occulted by Makemake was NOMAD 1181-0235723, with an event lasting no longer than a minute. In all, seven different telescopes across Brazil and Chile were used in the observations. The paper on this work is Ortiz et al., “Albedo and atmospheric constraints of dwarf planet Makemake from a stellar occultation,” Nature 491 (22 November 2012), pp. 566-569 (abstract).