Red dwarfs offer fascinating astrobiological speculation, allowing us to ponder whether flare activity or tidal lock could be the game-changer that prevents life from developing around them. We have much to learn on that score, but new work from Rory Barnes (University of Washington) and René Heller (Leibniz Institute for Astrophysics, Potsdam) looks beyond red dwarfs to brown and white dwarfs and their own prospects for life. The prognosis: Poor. Planets around these objects, the researchers say, would have an early history that could remove surface water.

The problem is nuclear burning and the lack thereof. Yes, both brown and white dwarfs could support a habitable zone, but what sets them apart from red dwarfs is that they cool slowly and continuously, meaning their habitable zones shrink inward toward the star. Imagine, Barnes and Heller say, a planet that starts out as a Venus-like world beset with a runaway greenhouse effect. Eventually the habitable zone contracts enough to create the needed temperatures for liquid water to exist, but by now the planet’s surface water is gone and so is the chance for life.

“These planets, if we find them today in a current habitable zone, previously had to have gone through a phase which sterilized them forever,” Barnes said. Heller added, “So, even if they are located in the habitable zone today, they are dead.”

The paper speaks in terms of the ‘insolation habitable zone,’ that region for which radiation flux from the star equals what we find in the habitable zone around main-sequence stars. But simply being in that zone is not sufficient. Here’s the case in a nutshell, as described in the paper:

The identiﬁcation of this so-called insolation habitable zone (IHZ) is an important ﬁrst step in constraining the possibility of habitable planets orbiting WDs and BDs, but one cannot neglect how a planet behaves prior to the arrival of the IHZ at its orbit. The inner edge of the HZ is deﬁned to be the orbits at which a desiccating greenhouse, either moist, runaway or tidal, is just possible (Kasting et al. 1993; Barnes et al. 2012). These phenomena may ultimately remove all surface water and leave an uninhabitable planet behind. Thus, planets initially interior to the HZ may not actually be habitable after the primary has cooled and/or tidal heating has subsided suﬃciently for the planet to reside in it. Note that we will refer to the HZ as resulting from both irradiation and tidal heating, but to the IHZ as the classic habitability model of e.g. Kasting et al. (1993).

The reference to tidal heating is inserted because the close proximity of the IHZ to the star raises concern that tidal heating effects could be in themselves strong enough to trigger the runaway greenhouse scenario, even for planets with extremely low eccentricities. But what of planets that enter the IHZ from a more distant orbit, jarred by gravitational instabilities in the system? Large eccentricities could still dish up enough tidal heating to sterilize the surface, but Barnes and Heller add that we would not be able to recognize such a history for a planet whose orbit had gradually been circularized, so there is still some possibility of life in such places. 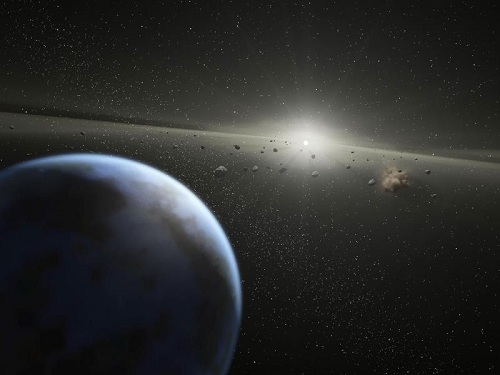 Image: An artist’s impression of a massive asteroid belt in orbit around a star. Recent work with SDSS data shows that similar rubble around many white dwarfs contaminates these stars with rocky material and water. Could planets support life in the habitable zone around such stars? Credit: NASA-JPL / Caltech / T. Pyle (SSC).

Is this category of star likely to have planets in the first place? The researchers note that no terrestrial planets have yet been found around either white or brown dwarfs, but they may well exist. We do have observations suggesting gas giants around both classes of star — the paper on this work goes into the details — and there is evidence of protoplanetary disks around brown dwarfs that could form into terrestrial worlds, while some white dwarfs are known to have metal-rich disks. And we have the interesting example of KOI 55, which has two terrestrial planet candidates orbiting a ‘horizontal branch’ star that seems well on its way to white dwarf status.

More work is needed to determine whether planets can become habitable after long periods in a runaway greenhouse phase, and whether migration scenarios exist for white and brown dwarf planets that could result in habitable outcomes. The authors, noting the complexity of the analysis, add that they cannot rule out habitability but call the journey to it ‘a difficult path.’ The paper is Barnes and Heller, “Habitable Planets Around White and Brown Dwarfs: The Perils of a Cooling Primary.” I don’t see the preprint up on the arXiv site as yet but will post the link (and the full citation in Astrobiology) as soon as I have them. More in this University of Washington news release.