On Debris Disks and Super-Earths

The red dwarf Gliese 581 continues to draw the eye, whether or not the putative world Gl 581 g is there or not. The latter, whose existence has been the subject of controversy, would occupy a tantalizing place in its star’s habitable zone, though in some models the planet Gl 581 d might also skirt the outer edge of the HZ. Now we have interesting new work from the European Space Agency’s Herschel space observatory announcing that Gl 581, along with the G-class star 61 Vir, another nearby planetary system, shows the the signature of cold dust at -200 degrees Celsius.

It’s an abundant signature, too, meaning that both these systems must have ten times the number of comets found in our own Solar System’s Kuiper Belt. The two papers on this work grow out of a program called, fittingly, DEBRIS (Disc Emission via a Bias-free Reconnaissance in the Infrared/Sub-mm). What the researchers working these data are suggesting is that the lack of a large gas giant in the two systems may relate to the dense debris cloud. Instead of an era of heavy bombardment triggered by gas giants disrupting the Kuiper Belt, as occurred in our system, these stars may have experienced a much gentler inflow of volatiles. Thus Mark Wyatt (University of Cambridge), lead author of the paper on 61 Vir:

“The new observations are giving us a clue: they’re saying that in the Solar System we have giant planets and a relatively sparse Kuiper Belt, but systems with only low-mass planets often have much denser Kuiper belts… We think that may be because the absence of a Jupiter in the low-mass planet systems allows them to avoid a dramatic heavy bombardment event, and instead experience a gradual rain of comets over billions of years.”

Have a look at this Herschel image showing the situation around Gl 581: 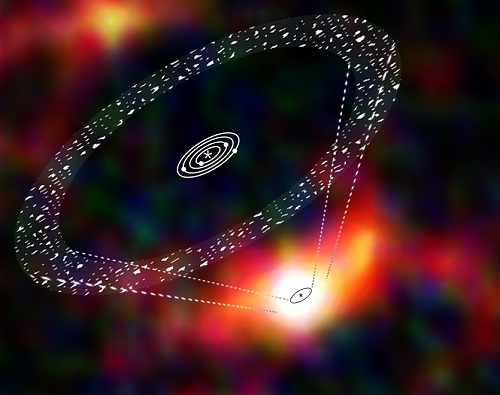 Image: An expanded diagram of the debris disc and planets around the star known as Gliese 581, superimposed on a composite Herschel image assembled from separate observations made with its PhotoArray Camera and Spectrometer (PACS) at 70, 100 and 160 micrometre wavelengths. The white region in the lower centre of the image is the emission that originates almost entirely from the disc, with only a small contribution from the unseen Gliese 581. The line drawing superimposed on the Herschel image gives a schematic representation of the location and orientation of the star, planets and disc, albeit not to scale. The black oval outline sketched onto the Herschel data represents the innermost boundary of the debris disc; the approximate location of the outermost boundary is represented by the outer set of dashed lines. Credit: ESA/AOES.

An older star like Gl 581 would have had two billion years or so for a substantial amount of water to be delivered to the inner system and, of course, to any potentially habitable worlds that reside there. What we now believe about the planets circling Gl 581 is that they have masses between 2 and 15 times that of the Earth, all located within 0.22 AU of the star, while the debris disk extends from 25 AU to 60 AU. A Neptune-class world further out, however, is a possibility. The researchers believe the large amount of dust Herschel has detected must be the result of cometary collisions, which could be triggered by a planet — perhaps about as large as the close-in planets — orbiting near the debris disk.

So we are looking at larger debris disks around systems where there is no Jupiter-class planet, and far less dense disks around stars where large gas giants are found. The paper on Gl 581 adds:

It is intriguing that, in our current analysis of the DEBRIS sample of 89 M-stars, the only debris disk conﬁdently detected around a mature M-star also happens to be around the only star known to have low mass planets. This could mean that the correlation between low-mass planets and debris disks recently found for G-stars by Wyatt et al. (2012) also applies to M-stars. Then, the high fraction (∼ 25%) of M-stars known to host low mass planets in the radial velocity and Kepler observations should make debris disks relatively common around them. If these disks have not been detected yet, it may be because searches have simply not been deep enough, or because the disk around GJ 581 is the brightest owing to some intrinsic properties ; for example hosting a multiple planetary system.

Modeling of the debris disk around the G-class star 61 Vir shows that the dust extends from 30 AU to at least 100 AU. The two planets known to orbit the star have masses between 5 and 18 times that of the Earth, and are located within 0.22 AU. The paper on 61 Vir summarizes the situation with regard to G-class stars:

There is likely little interaction between the disk and the known planets, which are at < 0.5AU. The lack of planetesimals in the < 30AU region could be explained by the existence of planets in this region, but the depletion can also be explained by collisional erosion... Considering a sample of the nearest 60 G stars there is an emerging trend that stars which, like 61 Vir, only have low-mass planets, are more likely to have detectable debris... We attribute this trend to the fact that the formation processes that make low-mass planets are likely to also result in large quantities of distant debris.

The papers are Wyatt et al., “Herschel imaging of 61 Vir: implications for the prevalence of debris in low-mass planetary systems,” in press at Monthly Notices of the Royal Astronomical Society (preprint), and Lestrade et al., “A DEBRIS Disk Around The Planet Hosting M-star GJ581 Spatially Resolved with Herschel,” accepted by Astronomy and Astrophysics (preprint).