Even as New Horizons continues to push toward Pluto, now just past the halfway point between the orbits of Uranus and Neptune, we’re continuing to get excellent data from the much closer Cassini spacecraft around Saturn. Cassini’s composite infrared spectrometer (CIRS) is probing the circulation and chemistry of Titan’s atmosphere, tracking how gases like benzene and hydrogen cyanide are distributed and affected by changes in temperature and circulation. We’re getting a closeup view of how chemistry and atmospheric circulation modify climate on the distant moon, information that shows a good deal of change over a short period of time.

The latest from Cassini, written up in a paper just published in Nature, involves a shift in seasonal sunlight that is apparently tied to the reversal in circulation around the moon’s south pole. Earlier in the mission the air here was rising. Now there is strong evidence for sinking air. Nick Teanby (University of Bristol, UK) notes how quickly the transition has occurred given the fact that Titan’s year is the equivalent of nearly 30 Earth years, and changes here generally occur slowly. Fortunately, Cassini is in the right position to see the changes in progress. 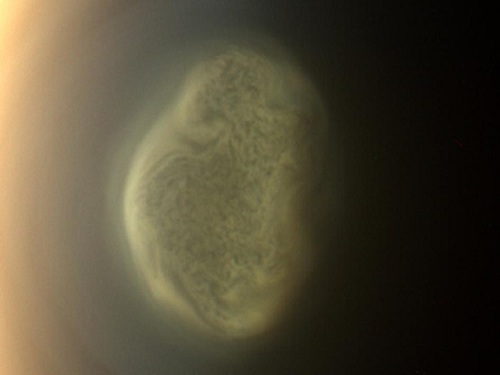 Image: This true color image captured by NASA’S Cassini spacecraft before a distant flyby of Saturn’s moon Titan on June 27, 2012, shows a south polar vortex, or a mass of swirling gas around the pole in the atmosphere of the moon. The south pole of Titan (3,200 miles, or 5,150 kilometers, across) is near the center of the view. NASA/JPL-Caltech/Space Science Institute.

In Cassini’s first years at Saturn, Titan’s north pole was associated with a high-altitude hot spot at a time of northern winter. A visible ‘hood’ of dense high altitude haze remained lit by sunlight even though much of the northern latitudes remained dark. As the southern hemisphere moved into autumn and began to tilt away from the Sun, the north pole hot spot began to disappear, while similar features — evidently induced by the compression of sinking air above the pole — started showing up at the south pole. The reversal from uplift to sinking air evidently occurred in a period of six months around the equinox of August 2009, when the Sun was directly over Titan’s equator. Within two years of the reversal, some of the gases CIRS tracks had increased 100-fold.

“Next, we would expect to see the vortex over the south pole build up,” said Mike Flasar, the CIRS principal investigator at NASA’s Goddard Space Flight Center in Greenbelt, Md. “As that happens, one question is whether the south winter pole will be the identical twin of the north winter pole, or will it have a distinct personality? The most important thing is to be able to keep watching as these changes happen.”

The story involves more than changes in Titan’s vertical winds. The CIRS instrument also found that complex chemicals are being produced at altitudes up to 600 kilometers above the surface, showing us that atmospheric circulation extends a good deal higher than expected. In fact, complex chemistry and vertical movement in the atmosphere occur above the haze layer first detected by the Voyager spacecraft. What had been thought to be a ‘detached’ layer of haze may actually be a transformational area where small haze particles combine before descending deeper into the atmosphere, where they produce the orange color characteristic of the moon.

The paper is Teanby et al., “Active upper-atmosphere chemistry and dynamics from polar circulation reversal on Titan,” Nature Vol. 491 No. 7426 — I’ll have a link to the abstract when Nature‘s servers, currently down, get back online. More in this JPL news release.