Stretch out your time horizons and interstellar travel gets a bit easier. If 4.3 light years seems too immense a distance to reach Alpha Centauri, we can wait about 28,000 years, when the distance between us will have closed to 3.2 light years. As it turns out, Alpha Centauri is moving in a galactic orbit far different from the Sun’s. As we weave through the Milky Way in coming millennia, we’re in the midst of a close pass from a stellar system that will never be this close again. A few million years ago Alpha Centauri would not have been visible to the naked eye. 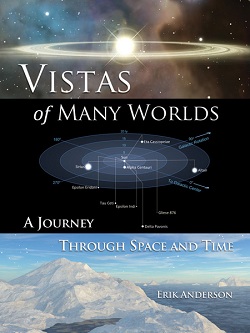 The great galactic pinball machine is in constant motion. Epsilon Indi, a slightly orange star about an eighth as luminous as the Sun and orbited by a pair of brown dwarfs, is currently 11.8 light years out, but it’s moving 90 kilometers per second relative to the Sun. In about 17,000 years, it will close to 10.6 light years before beginning to recede. Project Ozma target Tau Ceti, now 11.9 light years from our system, has a highly eccentric galactic orbit that, on its current inbound leg, will take it to within the same 10.6 light years if we can wait the necessary 43,000 years.

And here’s an interesting one I almost forgot to list, though its close pass may be the most intriguing of all. Gliese 710 is currently 64 light years away in the constellation Serpens. We have to wait a bit on this one, but the orange star, now at magnitude 9.7, will in 1.4 million years move within 50,000 AU of the Sun. That puts it close enough that it should interact with the Oort Cloud, perhaps perturbing comets there or sending comets from its own cometary cloud into our system. In any case, what a close-in target for future interstellar explorers!

I’m pulling all this from Erik Anderson’s new book Vistas of Many Worlds, whose subtitle — ‘A Journey Through Space and Time’ — is a bit deceptive, for the book actually contains four journeys. The first takes us on a tour of ten stars within 20 light years of the Sun, with full-page artwork on every other page and finder charts that diagram the stars in each illustration. The second tour moves through time and traces the stars of an evolving Earth through text and images. Itinerary three is a montage of scenes from known exoplanets, while the fourth tour takes us through a sequence of young Earth-like worlds as they develop.

Anderson’s text is absorbing — he’s a good writer with a knack for hitting the right note — but the artwork steals the show on many of these pages, for he’s been meticulous at recreating the sky as it would appear from other star systems. It becomes easy to track the Sun against the background of alien constellations. Thus a spectacular view of the pulsar planet PSR B1257+12 C shows our Sun lost among the brighter stars Canopus and Spica, with Rigel and Betelgeuse also prominent. The gorgeous sky above an icy ocean on a planet circling Delta Pavonis shows the Sun between Alpha Centauri and Eta Cassiopeiae. Stellar motion over time and the perspectives thus created from worlds much like our own are a major theme of this book.

From Epsilon Eridani, as seen in the image below, the Sun is a bright orb seen through the protoplanetary disk at about the 4 o’clock position below the bright central star. 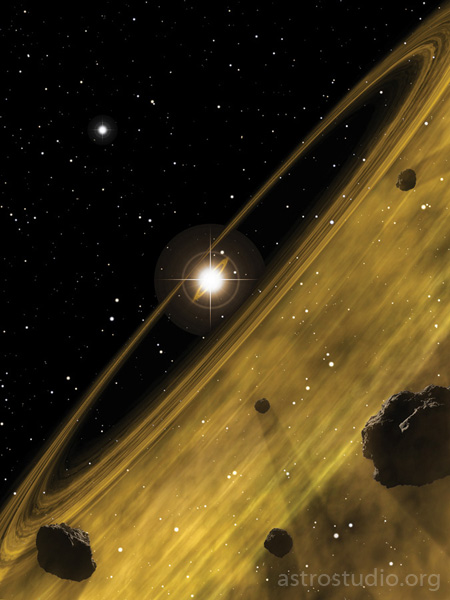 Image: The nearby orange dwarf star Epsilon Eridani reveals its circumstellar debris disks in this close-up perspective. Epsilon Eridani is only several hundred million years old and perhaps resembles the state of our own solar system during its early, formative years. Credit: Erik Anderson.

Vistas of Many Worlds assumes a basic background in astronomical concepts, but I think even younger readers will be caught up in the wonder of imagined scenes around planets we’re now discovering, which is why I’m buying a copy for my star-crazed grandson for Christmas. He’ll enjoy the movement through time as well as space. In one memorable scene, Anderson depicts a flock of ancient birds flying through a mountain pass 4.8 million years ago. At that time, the star Theta Columbae, today 720 light years away, was just seven light years out, outshining Venus and dominating the sunset skies of Anderson’s imagined landscape.

And what mysteries does the future hold? The end of the interglacial period is depicted in a scene Anderson sets 50,000 years from now, showing a futuristic observation station on the west coast of an ice-choked Canada. The frigid landscape and starfield above set the author speculating on how our descendants will see their options:

Will the inhabitants of a re-glaciating Earth seek refuge elsewhere? Alpha Centauri, our nearest celestial neighbor, has in all this time migrated out of the southern skies to the celestial equator, where it can be sighted from locations throughout the entire globe. It seems to beckon humanity to the stars.

And there, tagged by the star-finder chart and brightly shining on the facing image, is the Alpha Centauri system, now moving inexorably farther from our Sun but still a major marker in the night sky. Planet hunter Greg Laughlin has often commented on how satisfying it is that we have this intriguing stellar duo with accompanying red dwarf so relatively near to us as we begin the great exoplanet detection effort. We’re beginning to answer the question of planets around Alpha Centauri, though much work lies ahead. Perhaps some of that work will be accomplished by scientists who, in their younger years, were energized by the text and images of books like this one.

Next post: Skylon: Promising Tests of the SABRE Engine