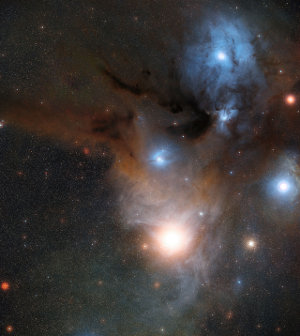 Do planets form easily around brown dwarf stars? Are they actually common? We’re getting a glimpse of the possibilities in new work at the Atacama Large Millimeter/submillimeter Array (ALMA), where a brown dwarf known as ISO-Oph 102 (also called Rho-Oph 102) is under investigation. In most respects it seems like a fairly run-of-the-mill brown dwarf, about 60 times the mass of Jupiter and thus unable to ignite hydrogen fusion. It’s also tiny, at 0.06 times the mass of the Sun, a dim object in the constellation of Ophiuchus.

The work suggests that in the outer regions of a dusty disk surrounding Rho-Oph 102 there exist the same kind of millimeter-sized solid dust grains found around the disks of young stars. That’s intriguing because astronomers have thought that earlier finer grains would not be able to grow into these larger particles in the cold, sparse disks assumed to be around brown dwarfs. Those that did form were thought to disappear quickly toward the inner disk, where they would be undetectable. The fact that these larger grains are here has interesting implications, according to CalTech’s Luca Ricci, who led the international team performing the study:

“We were completely surprised to find millimetre-sized grains in this thin little disc. Solid grains of that size shouldn’t be able to form in the cold outer regions of a disc around a brown dwarf, but it appears that they do. We can’t be sure if a whole rocky planet could develop there, or already has, but we’re seeing the first steps, so we’re going to have to change our assumptions about conditions required for solids to grow.”

Image: This wide-field view shows the star-forming region Rho Ophiuchi in the constellation of Ophiuchus (The Serpent Bearer), as seen in visible light. This view was created from images forming part of the Digitized Sky Survey 2. Credit: ESO/Digitized Sky Survey 2/Davide De Martin.

The disks around brown dwarfs may thus be more similar to those around young stars than we had realized, suggesting that rocky planets may not be uncommon here. We do have a few brown dwarf planets — 2M1207b, MOA-2007-BLG-192Lb and 2MASS J044144 — already in the book, one of them relatively small at 3.3 Earth masses. And a study by Andrey Andreeschchev and John Scalo (University of Texas) has indicated that terrestrial-mass planets should form around these objects as long as there is enough disk material to work with. 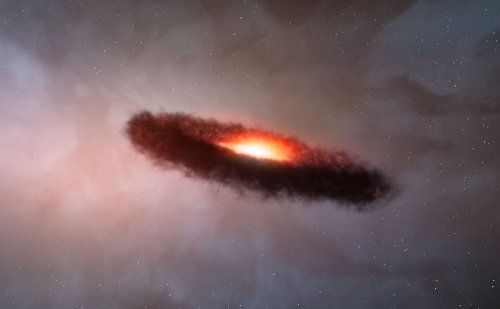 Image: Rocky planets are thought to form through the random collision and sticking together of what are initially microscopic particles in the disc of material around a star. These tiny grains, known as cosmic dust, are similar to very fine soot or sand. Astronomers using the Atacama Large Millimeter/submillimeter Array (ALMA) have for the first time found that the outer region of a dusty disc encircling a brown dwarf — a star-like object, but one too small to shine brightly like a star — also contains millimetre-sized solid grains like those found in denser discs around newborn stars. Credit: ALMA (ESO/NAOJ/NRAO)/M. Kornmesser (ESO).

The ALMA work also found carbon monoxide around the brown dwarf, its first detection in a brown dwarf disk. All this is promising stuff if we want to construct exotic scenarios about what may happen around these dim objects. Lacking the mass to fire hydrogen fusion, a brown dwarf is nonetheless going to emit heat because of its slow contraction due to gravity. Any brown dwarf with terrestrial planets around it is going to be doing a slow fade as it gives up gravitational potential energy. That means that if there is a habitable zone there, it gradually moves inward.

I’ve quoted him on this before, but Centauri Dreams reader Andy Tribick may not mind if I put this comment of his out there again. He’s talking about life around brown dwarfs:

It’d be interesting to come up with some scenarios for evolution on such a planet whose star decreases in luminosity as it ages (as opposed to more conventional stars that brighten as they age) – perhaps life might begin in the cloud layers of an initially Venus-like planet, moving to the surface as the atmosphere cools and the oceans rain out of the atmosphere, and finally moving to a more Europa-like state with the oceans frozen under an ice layer.

The 2004 study by Andreeshchev and Scalo I referred to above concluded that a brown dwarf with the mass of 0.07 solar masses, not all that far off Rho-Oph 102’s 0.06, could produce a habitability duration of a billion years, presumably long enough to get basic life functioning. And because the two scientists are talking about a classic habitable zone definition involving liquid water on the surface, you can see that Andy Tribick’s idea would extend the duration of possible habitability at both ends. Andreeshchev and Scalo themselves can extend habitability out to a surprising four billion years depending on how far they push the Roche limit, which governs how close a planet can be to its host star before it’s torn apart by tidal forces.

So maybe there’s a case for astrobiology around brown dwarfs, objects about which we still have much to learn. Just how common are they? While some scientists have suggested that brown dwarfs might be as common as the M-dwarfs that make up as much as 80 percent of the stars in the Milky Way, the results from WISE — the Wide-field Infrared Survey Explorer — turn up one brown dwarf for every six stars. That’s still a significant number of objects, and it includes 33 brown dwarfs known to be within 26 light years of the Sun, but the idea of interstellar targets closer than Alpha Centauri, at least stellar targets, is evidently fading from view.

But back to Luca Ricci and team and their work with ALMA. The great news embedded in the story is that ALMA is only partially up to strength. This array of radio telescopes in Chile’s Atacama desert operates at millimeter wavelengths and is intended to consist of 66 instruments when complete, but Ricci’s team worked with just a quarter of the final complement of antennas. In terms of observing planetary system formation, ALMA is already proving its worth, and a completed ALMA installation should be able to give us a close look at Rho-Oph 102:

“We will soon be able to not only detect the presence of small particles in discs, but to map how they are spread across the circumstellar disc and how they interact with the gas that we’ve also detected in the disc,” Ricci said. “This will help us better understand how planets come to be.”

The paper is Ricci et al., “ALMA observations of rho-Oph 102: grain growth and molecular gas in the disk around a young Brown Dwarf,” accepted at the Astrophysical Journal (abstract). The Andreeshchev and Scalo paper is “Habitability of Brown Dwarf Planets,” Bioastronomy 2002: Life Among the Stars. IAU Symposium, Vol. 213, 2004 (full-text).