Finding a way to extend the classical habitable zone, where liquid water can exist on the surface of a planet, is a project of obvious astrobiological significance. Now a team of astronomers and geologists from Ohio State University is making the case that their sample of eight stars shows evidence for just such an extension. The stars in question, drawn from a dataset created by the High Accuracy Radial Velocity Planet Searcher spectrometer at the European Southern Observatory in Chile, were selected because they match up well with the Sun in terms of size, age and composition. Seven of the eight, however, show signs of much more thorium than found in our star.

It’s an interesting result, as seen in this Ohio State news release. The slow radioactive decay of elements like thorium, potassium and uranium, all found in the Earth’s mantle, helps to heat the planet. These are elements present at planetary formation and, according to Ohio State’s Wendy Panero, they are involved in producing enough heat to drive plate tectonics, which some believe to be a factor in maintaining our planet’s oceans. All this is in addition to the sources of heat convection found in the Earth’s core, which play a comparable role in crustal movement.

The work was presented last week at the American Geophysical Union meeting in San Francisco by Cayman Unterborn, a graduate student at Ohio State who is working under Panero. Unterborn’s thesis: More thorium in a stellar interior indicates that the interior of planets found around the star would be warmer than the Earth. He notes that one of the stars in the HARPS survey contains 2.5 times more thorium than the Sun. Unterborn’s calculations show that any terrestrial planets forming around that star would generate as much as 25 percent more heat than the Earth, providing a long-lasting driver for plate tectonics. The warmer planet would have a habitable zone farther from its star as well, supported by the additional internal heat. 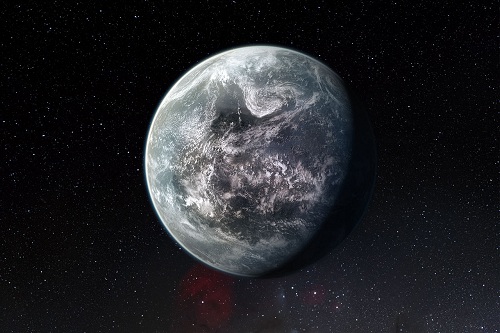 Image: An artist’s impression of the ‘super-Earth’ HD 85512 b. Is it possible that a planet like this is warmer internally than the Earth, allowing life to form over a wider habitable zone? Credit: ESO/M. Kornmesser.

The cautious Unterborn is aware that he’s looking at a small sample:

“If it turns out that these planets are warmer than we previously thought, then we can effectively increase the size of the habitable zone around these stars by pushing the habitable zone farther from the host star, and consider more of those planets hospitable to microbial life. At this point, all we can say for sure is that there is some natural variation in the amount of radioactive elements inside stars like ours. With only nine samples including the sun, we can’t say much about the full extent of that variation throughout the galaxy. But from what we know about planet formation, we do know that the planets around those stars probably exhibit the same variation, which has implications for the possibility of life.”

The Ohio State researcher notes that thorium is more energetic and has a longer half-life than uranium. Planets rich in the element would tend to remain hot longer than the Earth, which gets most of the heat of its radioactive decay from uranium. As to why we wind up on the short end of the stick when it comes to thorium, Unterborn believes it harks back to the exploding stars that seeded local space with heavy elements long before our planet formed:

“It all starts with supernovae. The elements created in a supernova determine the materials that are available for new stars and planets to form. The solar twins we studied are scattered around the galaxy, so they all formed from different supernovae. It just so happens that they had more thorium available when they formed than we did.”

These results are clearly preliminary, and Jennifer Johnson (Ohio State), a co-author of the study, points to the need to expand its scope. One way to do that is to analyze noise in the HARPS data, something that is now on Unterborn’s to-do list, after which the team plans to expand the search to additional Sun-like stars. If there are indeed large numbers of stars whose basic composition creates planets that generate more internal heat than the Earth, then we need to consider the implications for how we analyze habitable zones and their longevity.

Next post: Titan’s Big River (and Thoughts of Jules Verne)