One of the wonderful things about daily writing is that I so often wind up in places I wouldn’t have anticipated. Today’s topic includes the discovery of a long river valley on Titan that some are comparing to the Nile, for reasons we’ll examine below. But the thought of rivers on objects near Saturn invariably brought up the memory of a Frank R. Paul illustration, one that ran as the cover of the first issue of Hugo Gernsback’s Amazing Stories in April of 1926. The bizarre image shows sailing ships atop pillars of ice, a party of skaters, and an enormous ringed Saturn. 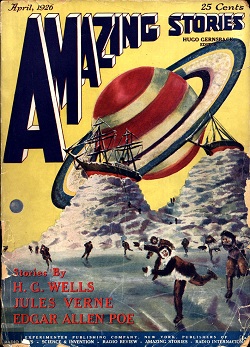 Is this Titan? The answer is no. The illustration is drawn from the lead story in the magazine, Gernsback’s serialized reprint of Jules Verne’s Off on a Comet, first published in French in 1877 under the title Hector Servadac. A huge comet has grazed the Earth and carried off the main characters, who must learn how to survive the rigors of a long journey through the Solar System, much of the time exploring their frozen new world on skates. I’ll spare you the plot details, but after a perilous fly-by of Jupiter they swing into Saturn’s realm:

…this remarkable ring-system is a remnant of the nebula from which Saturn was himself developed, and which, from some unknown cause, has become solidified. If at any time it should disperse, it would either fall into fragments upon the surface of Saturn, or the fragments, mutually coalescing, would form additional satellites to circle round the planet in its path.

To any observer stationed on the planet, between the extremes of lat. 45 degrees on either side of the equator, these wonderful rings would present various strange phenomena. Sometimes they would appear as an illuminated arch, with the shadow of Saturn passing over it like the hour-hand over a dial; at other times they would be like a semi-aureole of light. Very often, too, for periods of several years, daily eclipses of the sun must occur through the interposition of this triple ring.

If only Verne had been around to see Cassini’s images! Verne’s cometary voyagers can study the heavens with a certain detachment because the comet they are on, called Gallia, turns out to be circling back around toward the Earth, and they believe they will have the prospect of getting home. Off on a Comet is a lively tale. It would be interesting to see what Brian Stableford, who has translated so many early French tales of science fiction into English, would do with the text. Gernsback used a 1911 edition edited and I assume translated by Charles Horne, a New York-based college professor.

Jules Verne had no trouble concocting plots — in addition to his short stories, poems and plays (not to mention numerous essays), he wrote 54 novels in the series called Voyages Extraordinaires between 1863 and 1905. Here among much else are the familiar touchstones From the Earth to the Moon (1865), Journey to the Center of the Earth (1864) and Twenty Thousand Leagues under the Sea (1869). We can only wonder what a Verne armed with Cassini’s latest imagery might have come up with. Take a look, for example, at the river system in the photo below. No skating here, but a boat might work.

It goes without saying that we’ve never seen a river so vast anywhere beyond our own planet, and it does bear a certain resemblance to the Nile, with which it is being compared. What Richard Burton and John Hanning Speke might have given to have had a similar aerial view of the Nile, the search for whose headwaters brought them so much grief and personal animosity. This ‘Nile’ stretches for more than 400 kilometers from its origins to a large sea, its dark surface suggestive of liquid hydrocarbons along the entire length of this high-resolution radar image.

We’re looking at Titan’s north polar region, with a river valley flowing into Ligeia Mare, a sea larger than Lake Superior on Earth. We should actually consider this river a mini-Nile, given that its namesake runs for fully 6700 kilometers, but acknowledging its unique significance (thus far) in our exploration of Titan, the comparison still seems justified. In any case, the river has much to tell us about Titan if we can learn how to read it. Thus Jani Radebaugh, a Cassini radar team associate at Brigham Young University:

“Though there are some short, local meanders, the relative straightness of the river valley suggests it follows the trace of at least one fault, similar to other large rivers running into the southern margin of this same Titan sea. Such faults – fractures in Titan’s bedrock — may not imply plate tectonics, like on Earth, but still lead to the opening of basins and perhaps to the formation of the giant seas themselves.”

Image: Cassini’s view of a vast river system on Saturn’s moon Titan. It is the first time images from space have revealed a river system so vast and in such high resolution anywhere other than Earth. The image was acquired on Sept. 26, 2012, on Cassini’s 87th close flyby of Titan. The river valley crosses Titan’s north polar region and runs into Ligeia Mare, one of the three great seas in the high northern latitudes of Saturn’s moon Titan. It stretches more than 200 miles (400 kilometers). Credit: NASA/JPL-Caltech/ASI.

One day we may have a floating probe on Titan that can trace the course of such a river, working its way out into a dim sea under a sky whose dense cloud would doubtless screen the ringed Saturn from view. What a journey that would be. Even without the garish Frank Paul colors or the wild Vernian imagination, think of human instruments sending back data from a methane sea. Two proposals — Titan Lake In-situ Sampling Propelled Explorer (TALISE) and Titan Mare Explorer (TiME) show us what we might do with near-term technology to make this a reality.