Yesterday’s look at a major river on Titan took on a decidedly science fictional cast, but then Titan has always encouraged writers to speculate. Asimov’s “First Law” (1956) tackles a storm on Titan as a way of dealing with the Three Laws of Robotics. Arthur C. Clarke filled Titan with a large human colony in Imperial Earth (1976), and Kim Stanley Robinson used Titanian nitrogen in his books on the terraforming of Mars. As far back as 1935, Stanley G. Weinbaum was writing about a frozen Titan and the struggles of early explorers on that world.

The list could go on, but right now the focus stays on Cassini, which with funding continued through 2017 will continue to give us new and striking discoveries like the river dubbed the moon’s ‘little Nile’ feeding into Ligeia Mare. Nor do I want to ignore the recent work from Howard Zebker (Stanford University) and team, who have been working with Cassini radar data and new gravity measurements to tell us more about the internal structure of Titan and its shape. The idea that Titan boasts a deep subsurface ocean is consistent with the results in this study, which was presented at the annual meeting of the American Geophysical Union earlier this month. 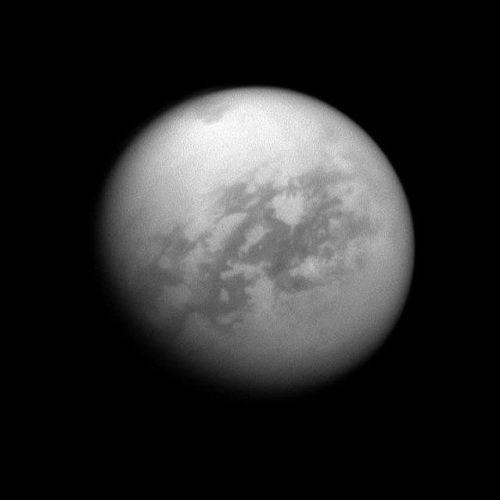 Image: A Cassini view of Titan, with Kraken Mare, a sea of liquid hydrocarbons, visible at the top of the image. The image was taken with the Cassini spacecraft narrow-angle camera on Sept. 14, 2011 using a spectral filter sensitive to wavelengths of near-infrared light centered at 938 nanometers. The view was acquired at a distance of approximately 1.2 million miles (1.9 million kilometers) from Titan and at a Sun-Titan-spacecraft, or phase, angle of 26 degrees. Image scale is 7 miles (12 kilometers) per pixel. Credit: NASA/JPL-Caltech/Space Science Institute.

The model of Titan now accepted is that beneath an icy crust perhaps 100 kilometers thick is an ocean of uncertain depth. Below that is a core that is most likely a combination of ice and rock. The ocean is thought to remain liquid thanks to heat generated by the decay of radioactive elements in the core that go back to the earliest days of the Solar System. Zebker’s team has been analyzing how Titan spins on its axis, and specifically how much it resists any changes in that spin, a factor known as the moment of inertia. He explains the result:

“The moment of inertia depends essentially on the thickness of the layers of material within Titan. The picture of Titan that we get has an icy, rocky core with a radius of a little over 2,000 kilometers, an ocean somewhere in the range of 225 to 300 kilometers thick and an ice layer that is 200 kilometers thick.”

That 200 kilometer ice layer doubles the previous estimate and implies there may be less rock in the core and more ice than had previously been estimated. But the work also has to contend with the fact that Titan’s shape is distorted by the gravitational influence of Saturn, flattening it slightly at the poles. And it turns out that Titan’s shape is more distorted than would be accounted for by the basic gravitational model. Working the numbers, Zebker finds that the density of material under the poles would have to be slightly greater than that under the equator.

Reasoning that liquid water is denser than ice, Zebker’s team comes up with this model: Thinner ice at Titan’s poles — about 3000 meters thinner than the average — and thicker ice at the equator, by about the same margin. The researchers used the combination of gravity and topography to suggest that the average thickness of the icy layer over the ocean is 200 kilometers. The variation in internal heat that would account for the changes in surface thickness may well be the result of tidal influences as Titan orbits the gas giant. Zebker again:

“The variation in the shape of the orbit, along with Titan’s slightly distorted shape, means that there is some flexure within the moon as it orbits Saturn. The planet’s other moons also exert some tidal influence on Titan as they all follow their different orbits, but the primary tidal influence is Saturn. The tides move around a little as Titan orbits and if you move anything, you generate a little bit of heat.”

So the internally generated heat that keeps Titan’s ocean liquid comes not only from radioactive elements but tidal interactions between Titan and Saturn as well as between Titan and the planet’s other moons. Putting these factors into play coupled with analysis of the moon’s moment of inertia allows us to piece together a picture of its internal structure. It’s worth noting that as we continue the study of the outer system, we’re now looking at subsurface ocean possibilities in many places, from Triton to Pluto and conceivably even further out into the Kuiper Belt.

The Titan we’re looking at through Cassini is a long way from the Titan Stanley G. Weinbaum imagined in the story I mentioned at the top, which was “Flight on Titan” (Astounding, January 1935). Weinbaum has a Titan that’s more chilly than frigid, one in which the characters flee native lifeforms as they make a forced march over Titanian mountains, all the while carrying the objects of the journey from Earth, the rare gems called ‘flame orchids.’ Weinbaum’s fantasy Titan bears little resemblance to the hazy, hydrocarbon-saturated surface we see, but it’s a testament to the fact that we have always peopled unknown worlds with the objects of our imagination, a compulsion that, given the means, leads inevitably to journeys of discovery.