An Early Nod to Beamed Propulsion

It’s always interesting how different strands of research can come together at unexpected moments. The last couple of posts on Centauri Dreams have involved new work on Titan, and early references in science fiction to Saturn’s big moon. The science fiction treatments show the appeal of a distant object with an atmosphere, with writers speculating on its climate, its terrain, and the bizarre life-forms that might populate it. But early science fiction also proposed ways of reaching the outer Solar System, some of them echoed only decades later by scientists and engineers. 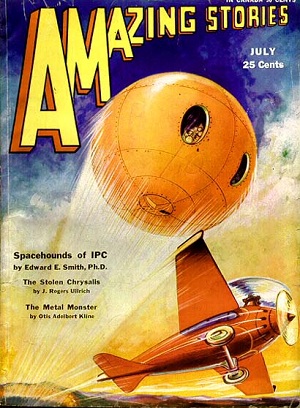 Christopher Phoenix wrote in yesterday commenting on chemist and doughnut-mix master E. E. “Doc” Smith, who when he wasn’t working for a midwestern milling company wrote space operas like The Skylark of Space on the side. Noting that Titan plays a major role in Smith’s story Spacehounds of IPC, Phoenix pointed out that the tale may be the first appearance in science fiction of beamed propulsion. This was just weeks after I had read an upcoming paper by Centauri Dreams regular Adam Crowl on interstellar propulsion concepts in which Crowl singled out E. E. Smith’s prescience, citing this same story.

The beauty of beamed propulsion is that you leave the propellant behind, thus slipping out of the noose of the rocket equation. Solar sails — using only the power of sunlight absent microwave or laser beaming — go back to the earliest days of astronautics — even Kepler had pondered the possibilities when studying comets and the effect of what he thought of as a solar wind upon their tails. Seeing that comet tails always pointed away from the Sun, Kepler homed in on the obvious analogy with seafaring vessels, wondering if fleets of space-borne ships might someday explore the Solar System. Thus his 1610 letter to Galileo:

There will certainly be no lack of human pioneers when we have mastered the art of flight… Let us create vessels and sails adjusted to the heavenly ether, and there will be plenty of people unafraid of the empty wastes. In the meantime, we shall prepare for the brave sky-travelers maps of the celestial bodies. I shall do it for the moon, you Galileo, for Jupiter.”

But sunlight drops off precipitously with distance. As Crowl noted, Smith’s concept in Spacehounds of IPC was to send energy from an installation on a planet, leaving the heavy powerplant off the vehicle by beaming intense coherent electromagnetic waves at the vessel. Here, as Phoenix did in his comment, we can cite Smith himself, who invokes Solar System locales that seemed plausible in the 1930’s, along with something called ‘Roeser’s Rays’ that supply the needed energy to the spaceships:

Power is generated by the great waterfalls of Tellus [Earth] and Venus—water’s mighty scarce on Mars, of course, so most of our plants there use fuel—and is transmitted on light beams, by means of powerful fields of force to the receptors, wherever they may be. The individual transmitting fields and receptors are really simply matched-frequency units, each matching the electrical characteristics of some particular and unique beam of force. This beam is composed of Roeser’s Rays, in their energy aspect…

…this whole thing of beam transmission is pretty crude yet and is bound to change a lot before long. There is so much loss that when we get more than a few hundred million kilometers away from a power-plant we lose reception entirely. But to get going again, the receptors receive the beam and from them the power is sent to the accumulators, where it is stored. These accumulators are an outgrowth of the storage battery…

…From the accumulators, then, the power is fed to the converters, each of which is backed by a projector. The converters simply change the aspect of the rays, from the energy aspect to the material aspect. As soon as this is done, the highly-charged particles—or whatever they are—thus formed are repelled by the terrific stationary force maintained in the projector backing the converter. Each particle departs with a velocity supposed to be that of light, and the recoil upon the projector drives the vessel, or car, or whatever it is attached to. Still with me?”

The reader may or may not be, but these early science fiction magazines were filled with long blocks of exposition as characters explained various scientific principles and fabulations to a rapt audience. Indeed, the letter columns of the science fiction pulps were filled with critiques and analyses of the various scientific ideas on display, some of them highly detailed. For more on this, there is no better source than John Cheng’s essential study Astounding Wonder (University of Pennsylvania Press, 2012).

I’ve always been fascinated by the first appearances of concepts in the early science fiction magazines, but this one had escaped me. A good thing Adam Crowl and Christopher Phoenix were on the case! As Phoenix points out, the energy of “Doc” Smith’s imaginary ‘Roeser’s Rays’ can somehow be used to produce thrust in any direction as opposed to bouncing photons off a departing sail, which would require extreme precision to keep the sail within the collimated beam and navigating to the correct destination. Says Phoenix: “I’ve seen a lot of rocket ships and mysterious “inertial drives” and “warp drives” in early SF, but never a spaceship that rode a beam until Spacehounds of IPC, and this space opera tale could be quite significant for that fact.”

Indeed. In keeping with so much science fiction of the time, Smith’s characters are wooden, his plots lurid, but the appeal of this story is in his imagined technologies. Nor was he above tinkering with a text when asked to adapt magazine work into a novel. Crowl noticed that when you compare the 1947 novelisation of “Spacehounds of IPC” to the earlier 1931 text, Robert Goddard disappears. It was through Goddard’s efforts in liquid fuel propulsion that interplanetary development began in the original, but after Goddard’s death in 1945, the latter disappears from the ensuing novel. Interesting too that Smith always considered Spacehounds of IPC his best work, true science fiction as opposed to what he called the ‘pseudo-science’ that had animated his Skylark novels, where handwaving FTL effects are commonplace.

I notice that P. Schuyler Miller, long a reviewer for Astounding, regarded Spacehounds of IPC to be Smith’s most believable book, a serious upgrade over earlier work. The story was serialized in Amazing Stories beginning in July of 1931 and has had both hardcover and paperback editions in the years since. In fact, the hardcover edition of 1947 was the first book ever published by Fantasy Press, a nice collector’s item. Like Carl Wiley, who under the pseudonym ‘Russell Saunders’ wrote the first article on solar sails for a science fiction magazine (Astounding, in May of 1951), E. E. Smith dished up an SF look at beamed propulsion thirty years before the invention of the laser, a fascinating extrapolation from the technology of his era.