We saw yesterday how a newly refined radial velocity technique allowed researchers to identify five planet candidates around the nearby star Tau Ceti. The latter has long held fascination for the exoplanet minded because it’s a G-class star not all that different from the Sun, and one of the planets around it — if confirmed — appears to be in its habitable zone. But smaller stars remain much in the news as well, as witness Gl 667C, a red dwarf (M-class) star in a triple system that also contains two closely spaced K-class stars with a semimajor axis of 1.82 AU.

M-class stars offer a lot to planet hunters, as new work using the HARPS spectrograph at La Silla is making clear. For one thing, a planet of a given size induces more radial velocity variation around a low-mass star than around a larger one, making the planet easier to spot. For another, red dwarfs are dimmer than G and K-class stars, with a habitable zone much closer to the star. Here again we get a larger radial velocity wobble than we would find with a larger star.

Philip Gregory (University of British Columbia) has performed a re-analysis of the HARPS data on Gl 667C that is getting play in the press because it identifies not one but three planets in the habitable zone. The star has about a third of the mass of the Sun, so according to Gregory’s figures, a habitable zone planet there produces seven times the radial velocity signature that a similar planet around a G-class star would generate. In 2011 Gl 667C was already known to be orbited by at least one planet, Gl 667C b, with a 7.2 day orbit, and there was evidence for other worlds. Later work confirmed the planet Gl 667C c in a 28-day orbit in the habitable zone.

All of this, says Gregory in the paper on his new work, has driven a serious effort to improve the statistical tools used to analyze radial velocity data, and we saw yesterday how Mikko Tuomi (University of Hertfordshire) and team put their own methods to work on Tau Ceti. Using his own algorithms, Gregory has already been able to confirm the existence of a second planet around 47 Ursae Majoris, but Gl 667C will draw more attention because of the dramatic placement of the planet candidates here. In this case, the astronomer included stellar jitter and orbital drift factors to re-analyze the HARPS data using Bayesian methods to refine the probability estimates.

The result: The detected signals include the already established planets in 7.2 and 28.1-day orbits, but also show possible planets in 30.8 (d), 38.8 (e), 53.2 and 91.3-day orbits (f). Gregory discounts the 53.2-day signal because it seems to be the result of surface activity on the star. All these candidates are more massive than Earth, but e is only 2.4 Earth masses. The signals at 30.8 and 38.8 days, if confirmed, would join Gl 667C c as planets in the habitable zone. Gregory finds that the 91.3 day orbit would take that planet inside the outermost edge of the habitable zone, although its eccentric orbit would keep it outside the HZ for the majority of time. 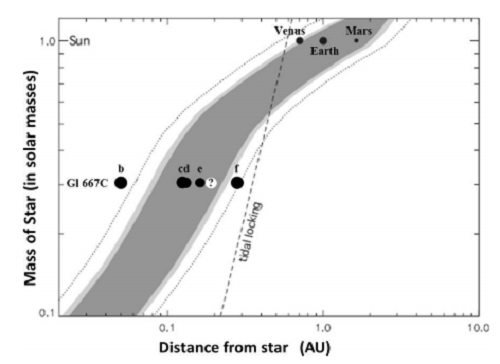 Image: The darker area is the orbital region that remains continuously habitable during at least 5 Gyr as a function of the stellar mass (Selsis et al. 2007). The light grey region gives the theoretical inner (runaway greenhouse) and outer limits with 50% cloudiness, with H2O and CO2 clouds, respectively. The dotted boundaries correspond to the extreme theoretical limits, found with a 100% cloud cover. The dashed line indicates the distance at which a 1 M⊕ planet on a circular orbit becomes tidally locked in less than 1 Gyr. Credit: Philip Gregory.

The scientist is careful to note that new simulations will be needed to determine which of the planetary signals are consistent with a stable planetary system. Look particularly at the closeness of the 28.1 and 30.8 day orbits, where the semi-major axis differs by a mere 0.007 AU. This sets up a closest approach, as Gregory notes, every 323 days, doubtless a fascinating astronomical spectacle from the surfaces of these possible worlds. And the author cites the Kepler mission’s own findings of systems with close planetary separations, including Kepler 36 b and c (0.014 AU), Kepler 42 b and d (0.0038 AU), and KOI 55b and c (0.0016 AU).

We may have to start getting used to solar systems with close planetary separations, unlike the relatively spacious inner system we see around the Sun. I’m reminded of something Steve Vogt (UC-Santa Cruz) said in the news release on the Tau Ceti story: “We are now beginning to understand that Nature seems to overwhelmingly prefer systems that have multiple planets with orbits of less than one hundred days. This is quite unlike our own solar system where there is nothing with an orbit inside that of Mercury. So our solar system is, in some sense, a bit of a freak and not the most typical kind of system that Nature cooks up.” Vogt was not speaking of M-dwarfs, of course, but the statement has no better illustration than Gl 667C’s possible planets.

The paper is Gregory, “Additional Keplerian Signals in the HARPS data for Gliese 667C from a Bayesian Re-analysis” (preprint).