In his new article on Alpha Centauri in Astronomy & Geophysics, Martin Beech (Campion College, University of Regina) noted that the Alpha Centauri stars seem to go through waves of scientific interest. Beech used Google’s Ngram Viewer to look for references to the system in both the scientific literature as well as general magazines and newspapers, finding that there is a 30-year interval between peaks of interest. The figure is suspiciously generational, and Beech wonders whether it reflects an awakening of interest in this nearby system as each generation of scientists and publishers arises.

I mentioned on Christmas Eve that the Beech paper was a real gift for the holidays, and for those of us who try to track developments about Alpha Centauri, it certainly is, drawing together recent work and commenting with care on the findings. The big issue for now is the existence of planets around these stars, a question Centauri B b will begin to answer if it can be confirmed. Everyone from astrophysicists to science fiction authors has noted at one time or another that we may have planets around all three of these stars, no doubt fueling that thirty-year spike Beech identified. 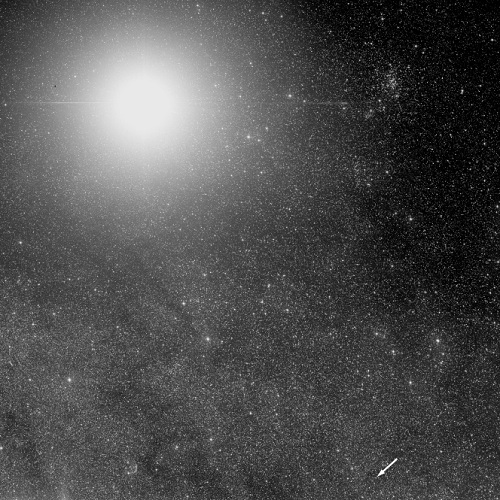 Image: Despite the overexposure of Centauri A and B that fuses the two stars into one at top left, I like it because it reveals Proxima Centauri (shown by the arrow at bottom right), an indication of how distant this nearest star to the Sun is from the two larger stars. Credit: 1-Meter Schmidt Telescope, ESO.

I remember a long-ago sixth grade afternoon when I asked the teacher, after a presentation about astronomy, whether the nearest star had planets like ours around it. After class, she slipped me a book to look at whose title is long lost to memory, but I recall it being stated with confidence that planets were all but impossible around binary stars. Now we know better, for we have planets around binaries elsewhere. As for Alpha Centauri, it was in 1997 that Paul Wiegert and Matt Holman showed that planetary orbits were viable here out to about 4 AU around Centauri A and B.

That would seem to rule out gas giants, which presumably would have formed beyond the snow line at roughly the same 4 AU and beyond, but terrestrial planets in closer orbits are still allowed. Beech runs through the recent scholarship for Centauri A and B, most of which shows the likelihood of planet formation, though in at least one case with a serious restriction:

Guedes et al.(2008) and Thébault et al. (2009) additionally find that planets should have formed around a Cen B. Assuming an initial co-planar distribution of planetesimals, Guedes et al. argue that multiple 1–2 MEarth planets might reside within the region 0.5–1.5 au from a Cen B. Taking into account the details of planetesimal encounters and impact velocities, however, Thébault and co-workers argue that planet formation is only favoured within a restricted zone of 0.5 au about a Cen B. At this stage it will be the discovery of additional planets, with orbits well beyond that of a Cen Bb, that will guide the development of next-generation planetesimal accretion models.

For that matter, can we assume that the current orbital characteristics of Centauri A and B are those of the initial system? In the paper by Philippen Thébault and team referenced above, the authors point out that the odds of Alpha Centauri having gone through a close encounter with a nearby star system that could have affected stellar orbits may be as high as 1 in 2. It’s regrettable, then, that we have no knowledge of the cluster that spawned Alpha Centauri or the effects such encounters might have had. We do know that this system formed from a different cluster than the Sun — our stars are close now but the condition is temporary, and Alpha Centauri was likely 1 to 2 billion years old when our Solar System was beginning to form.

You’ll find most of the papers Beech refers to, the recent ones anyway, discussed in earlier Centauri Dreams posts, and you can use the search function to track them down by author. The same is true of work on Proxima, the M-dwarf that accompanies Centauri A and B, or at least is located at roughly the same distance and shares the same proper motion. It’s hard to believe that the three don’t form a single system, especially given their common chemical composition, but it has always been a tough call going back to the work of Joan Gijsbertus Voûte, who announced the first parallax findings about Proxima in 1917. Voûte pondered whether the three stars were physically connected or ‘members of the same drift,’ and Beech notes that despite the following century of observations, we are still working on the same question.

It’s also been amply demonstrated that both gas giants and rocky worlds can form around M-dwarfs, so while we’re gradually ruling out larger planets around Proxima, we’re far from being able to declare there are no terrestrial planets orbiting it. Here again we’ve run through the numbers in Centauri Dreams in recent memory, but Beech sifts through the findings, which increasingly exclude planets of Jupiter-mass, and he notes in particular the work of Michael Endl and team, which argues that any planet greater than two Earth masses within Proxima’s habitable zone should have been detected by now. That leaves room for smaller worlds in interesting places.

We can also exclude various kinds of planets around Centauri A and B:

Thus the search goes on, and Beech believes the current surveys will be able to dampen the noise in the radial velocity signal of an Earth mass planet in a 1 AU orbit around Centauri A or B with about five more years of data gathering. Although the HARPS team at La Silla was first with an Alpha Centauri planet candidate, the hunt for an Earth-class world in a habitable orbit has only intensified. Dedicated Alpha Centauri search programs are in progress not just via HARPS but also through a Yale University program at Cerro Tololo (this one backed by the Planetary Society as well) and through the HERCULES spectrograph at Mt. John Observatory in New Zealand.

I’ve only touched on the highlights of this rich paper, whose bibliography alone makes it worth seeking out. The reference is Beech, “A journey through time and space: Alpha Centauri,” Astronomy & Geophysics, Volume 53, Issue 6, pp. 6.10-6.16 (abstract).