As the number of confirmed planets and planet candidates has grown, we’ve gone through a variety of techniques for exoplanet hunting, as Michael Lemonick’s new book Mirror Earth: The Search for Our Planet’s Twin (Walker & Co., 2012) makes clear. I’m only a third of the way into the book but I bring it up because it’s germane to today’s discussion in two ways. The first is purely administrative. Readers of Centauri Dreams are used to seeing information about the book I’m reading on the front page, but as many emails have reminded me, lately it’s been absent. 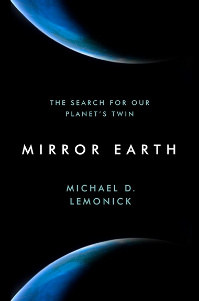 What’s happening is this: The software I use to display the book cover and progress bar is no longer being maintained by its creator, and the program has become flaky. I’ve discovered more and more that certain books will not display properly, so that although I can enter them in the configuration file, nothing shows up in the sidebar on the home page. As a result, I’m searching for alternatives that will display titles like Mirror Earth and anything else I’m currently reading.

But even though I’m early on in my progress through Lemonick’s book, I can already recommend it for the overview it provides. Lemonick writes for TIME and has written skillfully about astronomy’s history (William and Caroline Herschel were the topic of a recent book) and cosmology. He was an early entrant into exoplanet books with 1998’s Other Worlds. In short, Lemonick knows what he’s up to, and he offers the general reader a concise set of discussions with major exoplanet figures and a cogent history of how the field developed.

Astrometry was an early entrant in the exoplanet hunt as astronomers hoped to identify the side-to-side motion of a star being tugged by its planet, but early ‘discoveries’ made with the method proved bogus, and radial velocity emerged as the technique of choice, focusing on the movement of the star to and away from the Earth as measured by Doppler shift. We soon learned the effectiveness of transits (Kepler uses this method) and investigated gravitational lensing and, in rare cases, succeeded at direct imaging. What other methods will emerge?

As I proceed with the book, I’m also looking at recent news from the planet hunting HiCIAO ( High Contrast Instrument for the Subaru Next Generation Optics), used by an international team with the Subaru Telescope on Mauna Kea. HiCIAO has ways of blocking out the central star to help astronomers detect faint objects like planets or dust disks around it. The new work presents studies of the disk around the young star (about 9 million years old) HD 135344B, some 460 light years from Earth in the constellation Lupus. The disk under measurement is 20 billion kilometers in radius, which is about five times greater than Neptune’s distance from the Sun. 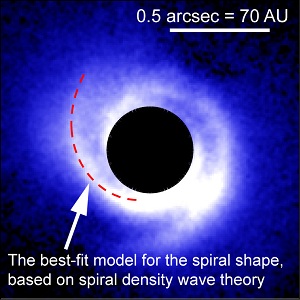 This is intriguing stuff because the team is looking at a spiral disk structure with two discernible arms. Applying density wave theory to the data, the researchers conclude that planets embedded within the disk may account for the spiral shape, and in doing so, they may be revealing another way of detecting exoplanets. The idea here is that regions of enhanced density develop inside a rotating disk because of differential rotation. A planet within the disk could produce the kind of density wave that results in the formation of just this kind of spiral structure. From the paper: “While we cannot uniquely identify the origin of these spirals, planets embedded in the disk may be capable of exciting the observed morphology. Assuming that this is the case, we can make predictions on the locations and, possibly, the masses of the unseen planets.”

Image: A comparison of the fit between the theoretical model and observational data. The red dashed line represents the shape of the disk based on modeling from density wave theory. The image shows that the data conform to the predictions of the theory and supports an explanation for the development of the structure in terms of this theory’s model. (Credit: NAOJ).

So far no planet candidate has emerged — we are simply considering the possibility that a planet is the cause of the density wave. But the use of density wave theory in measuring a protoplanetary disk helps us to understand how spiral disks form, and it may develop into a more precise way to detect exoplanets. The paper on this work suggests that HiCIAO may be capable of detecting the indirect signatures of planets down to 0.05 Jupiter mass, but it will take future observations at other wavelengths to see whether such predictions are borne out in fact.