Dynamics of an Interstellar Probe

Yesterday’s look at radiation and its effects on humans in space asked whether any Fermi implications were to be found in the work described at the University of Rochester. One answer is that expansion into the cosmos does not need to be biological, for biological beings can build robotic explorers equipped with enough artificial intelligence to get the job done. A truly advanced civilization would be able to create large numbers of intelligent probes or, indeed, self-replicating probes that could spread throughout the galaxy on a timescale of perhaps ten million years. 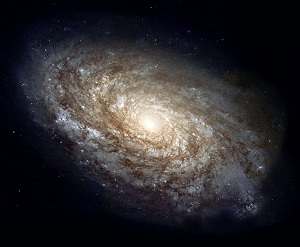 Fermi speculation is always fun but, when we get into the motivations of extraterrestrial civilizations, it leads inevitably to unfalsifiable solutions, good for conversation over coffee but incapable of producing a scientific result. Thus the ‘zoo hypothesis,’ the notion that the Earth is intentionally left alone to pursue its own development by beings with an agenda of their own. It makes for terrific science fiction, but how much can we say about alien sociology? Working with two colleagues at the University of Edinburgh, Duncan Forgan thinks we’d be better off studying the physical constraints that might govern an expanding wave of galactic exploration.

Image: The spiral galaxy NGC 4414, as imaged by the Hubble Space Telescope. Can simulations help us understand how a galaxy of hundreds of billions of stars can be explored by a single civilization? Credit: NASA.

Forgan argues that even in our early exploration of the Solar System, we’ve learned the value of gravitational ‘slingshot’ maneuvers that let us produce velocity and trajectory changes without the use of fuel. Simple powered flight is an inefficient way to travel, especially in our era of chemical rocketry and, presumably, in the coming era of nuclear propulsion methods. At the galactic level, probes can be accelerated relative to the galactic rest frame by similar techniques. Forgan and team run simulations analyzing the ways a single probe can move through a population of stars.

Specifically, the researchers work with three scenarios: 1) The ‘powered’ approach, in which a single probe simply moves between stars by targeting the nearest unvisited neighbor; 2) The ‘slingshot’ approach, using gravitational slingshot methods to move along the same course as in scenario 1; and 3) The ‘maxspeed’ approach, where a probe selects the next destination star in such a way as to get the biggest benefit from a slingshot maneuver — all this depends on the destination’s star’s velocity relative to the current star being approached. The three simulation scenarios were carried out in a field of 1 million stars at a density of 1 star per cubic parsec.

What Forgan and team are looking for is the effect of these different strategies on relative travel times, as the paper notes:

We select a relatively low maximum velocity of 3 X 10-5c, where c is the speed of light in vacuo. This is comparable to the maximum velocities obtained by unmanned terrestrial probes such as the Voyager probes. Admittedly, the Voyager probes achieved these speeds thanks to slingshot trajectories, so the top speed of human technology under purely powered flight is unclear. To some extent, the maximum powered speed of the probe is less important – increasing or decreasing this maximum will simply affect the absolute values of the resulting travel times in a similar fashion. What is more important is the relative effect of changing the propulsion method and/or the trajectory.

The slingshot trajectory turns out to have a significantly shorter travel time than either the powered or maxspeed approaches, following the same course as the ‘powered’ probe but able to boost its velocity at every stage of the journey. In fact, Forgan’s simulations show the probe will have increased its velocity by close to a factor of 100 in the course of the simulations. The ‘maxspeed’ scenario optimized for velocity but did not consider the distance to the next star, creating lengthy journeys between widely spaced stars in the early stages of the exploration.

Forgan notes that with the current speed limitations of human probes, the galaxy could not be explored with a single probe in the lifetime of the universe, but the use of multiple probes changes the picture entirely:

Given our current ability to manufacture large numbers of similar sized craft for terrestrial uses, it is not unlikely that we can adopt a similar approach to building probes. A simple calculation shows that producing 1011 Voyager-esque probes would allow humankind to explore the Galaxy in 109 years. Given that around 5 X 107 automobiles are produced each year globally, it seems reasonable to expect a coordinated global effort could produce the requisite probes within a few thousand years. If the probes are made to be self-replicating, using materials en route to synthesize copies, the exponential nature of this process cuts down exploration time dramatically.

Whatever the case — a fleet of probes created by an extraterrestrial civilization or an exponentially growing fleet of probes each engaged in self-replication — adding gravitational slingshot dynamics into the mix can shorten travel times and strengthen the Fermi paradox. Slingshot effects reduce a single probe’s travel time by two orders of magnitude. Forgan’s team is now repeating the analysis of this paper using self-replicating probes as the basis of exploring whether slingshot dynamics fit into the overall cost-benefit picture of that kind of expansion.

The paper is Forgan, Papadogiannakis and Kitching, “The Effect of Probe Dynamics on Galactic Exploration Timescales,” accepted for publication in JBIS (preprint).