Exactly what kind of planets can form around M-class dwarf stars is a major issue. After all, these stars, comprising 70 percent or more of the stars in the galaxy, are far more common than stars like the G-class Sun. About 5500 of the 160,000 stars the Kepler mission is looking at are M-dwarfs, and of these, 66 had been found to show at least one planetary transit signal at the time a new paper on M-dwarf planets was in preparation. That paper, the work of John Johnson and postdoc Jonathan Swift (Caltech) and team, homes in on the Kepler-32 system, whose five transiting planets offer a chance to study planet formation and frequency around such stars.

Kepler-32 is about half as massive as the Sun and has half its radius, with about 5 percent of its luminosity. The planets here have radii that range from 0.8 to 2.7 times that of the Earth, all of them orbiting within about a tenth of an astronomical unit from the star, a distance that is about a third of the radius of Mercury’s orbit around the Sun. The outermost of the five planets lies in the habitable zone. The Caltech team used Kepler data in correlation with observations from the Keck Observatory and the Palomar 60-inch telescope to characterize the system in detail. Two of the planets had already been confirmed, and the team has now confirmed the other three. 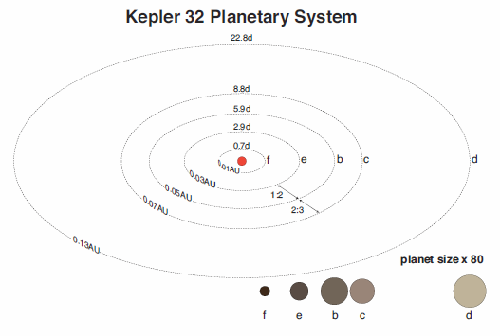 Image: — Depiction of the Kepler-32 planetary system with the star and orbits drawn to scale. The relative sizes of the planets are shown at the bottom of the ﬁgure scaled up by a factor of 80 in relation to their orbits. Credit: Jonathan Swift, John Johnson/Caltech.

Although the study is producing interesting material on planet formation, what’s capturing the bulk of press attention is the researchers’ estimate that there are at least 100 billion planets in the galaxy. It’s a conservative figure at that, because the analysis only includes planets in close orbits around M-dwarfs, leaving aside the issue of outer planets in such systems and planets orbiting other classes of star. To arrive at the figure, the team calculated the probability that an M-dwarf system would have the precise edge-on orientation we see with Kepler-32, combining that with the number of systems Kepler is able to detect. Even the conservative figure — essentially one planet for every star in the galaxy — is happy news for planet hunters, for it suggests that planets are the norm around the most common kind of stars in the Milky Way.

We select out 4682 M dwarfs from the Kepler Input Catalog that have been observed with Kepler and use their observational parameters to derive the planet occurrence rate of Kepler M dwarf planet candidates. We conﬁrm that within the completeness limits of the ﬁrst 6 quarters of Kepler data, the M dwarf planet candidates have an occurrence rate about 3 times that of solar-type stars, while the occurrence rate of all candidates around M dwarfs is 1.0±0.1. We expect the ﬁdelity of our culled sample to be above 90%. Thus the compact systems of planets around the Kepler M dwarf sample are a major population of planets throughout the Galaxy amplifying the signiﬁcance of the insights gleaned from Kepler-32.

The likelihood is that the five Kepler-32 planets formed much further out from the star and migrated inwards, one line of evidence being that the mass of the disk where the planets are found would be as much as three Jupiters, too much disk material for the space available based on our understanding of other proto-planetary disks. Moreover, the fact that M-dwarfs are brighter and hotter when young would have kept planet-forming dust from existing so close to the star. Yet a third line of reasoning is that the third and fourth planets of the system are not dense, implying they are composed of volatiles like carbon dioxide, methane or other ices and gases. Thus formation further out in the system with subsequent migration is the likely scenario.

The paper is Swift et al., “Characterizing the Cool KOIs IV: Kepler-32 as a prototype for the formation of compact planetary systems throughout the Galaxy,” accepted at The Astrophysical Journal (preprint).

Related: The Planetary Habitability Laboratory (University of Puerto Rico at Arecibo) notes that of the 18,406 ‘planet-like detection events’ released last month by the Kepler team, some 15,847 meet the criteria for study for possible inclusion in the institution’s Habitable Exoplanet Catalog. PHL analyzed and sorted the remaining candidates and was able to identify 262 potentially habitable worlds. These include four Mars-sized objects, 23 of Earth size, and 235 ‘super-Earths.’ The best candidate PHL sees thus far is an Earth-sized planet in a 231-day orbit around the star KIC-6210395, one that receives 70 percent of the light that Earth receives from the Sun. This interesting if preliminary analysis is reported in a news release wonderfully titled (with a nod to ‘Contact’) ‘My God, it’s full of planets! They should have sent a poet.’