On Artifacts Future and Past

How are you affected by the cave paintings at Lascaux? The paleolithic art in this region of southwestern France dates back perhaps 18,000 years, depicting large animal figures, human forms and abstract symbols. Some believe the paintings even contain astronomical pointers — star charts — but theories on how to interpret them abound, and whatever spin we put on them, we’re confronted by the mystery of evocative imagery reaching out over centuries. Lascaux and other such sites take us beyond civilization and into the realm of deep time, a place where our parochial concerns are dwarfed by this reminder of humanity’s aggregated experience.

Early cave art reaches almost twice as far back as the 10,000 year clock proposed by Danny Hillis and the Long Now Foundation hopes to take us forward. Yet the experience of the two is in some ways similar. Building a clock designed to tell time by the year and century places our short lives in perspective and demands we take a view that encompasses our remote descendants. Long-term thinking, forward or back, is about identifying the forces shaping the human experience and asking what we can do today to influence an outcome we will never live to see.

In some ways, artifacts like the Voyager Golden Record are cousins of the cave paintings, for they collect various statements about who we are and project them into the realm of deep time. It’s equally hard to imagine what far future audience the cave painters might have had in mind, if any, and what audience the Golden Records might one day achieve. But for chance we might never have learned about Lascaux, the paintings of which were discovered by a French teenager in 1940. And what chance is there that some extraterrestrial civilization may one day recover an intact Voyager, long silent but bearing the testimony of the record that identifies its makers? 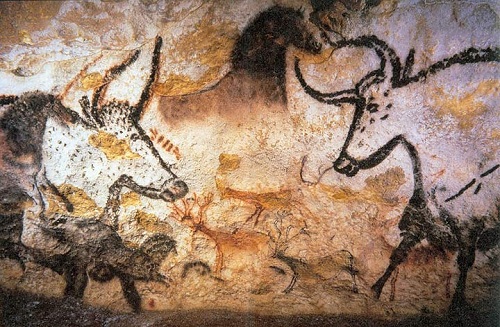 Image: One of the cave paintings of Lascaux, a chance discovery that brought the early human experience to vivid life. Credit: Wikimedia Commons.

I’m thinking about Lascaux this morning because a scene from the cave art is one of the images chosen by writer and artist Trevor Paglen for a multimedia project called The Last Pictures, an archive of 100 black and white photographic images launched into geosynchronous orbit aboard a communications satellite in November. Paglen had been contemplating the fact that most satellites in low Earth orbits eventually return to Earth, forced down by the inexorable processes of orbital decay. But communications satellites, almost 36,000 kilometers above the equator, are up there for good. “These satellites are the longest-lasting things that humans have ever made,” Paglen told The Atlantic’s Austin Considine in a recent interview. “Very few, if any, traces of human civilization [will remain] on the surface of the earth. But a ring of dead satellites and spaceships will remain in orbit, essentially, forever.”

So Paglen set about choosing photographs that would record the human experience, working with artists, scientists, philosophers and anthropologists to decide how to encapsulate it. Drawing on the expertise of a team at MIT and weighing the physical constraints for an archive he saw as lasting several billion years, the chosen images were etched into a silicon wafer that was bolted along with its protective shell onto the EchoStar XVI, a satellite operated by Dish Network. The satellite is expected to carry programming for 15 years, the archive to survive for billions more.

Have a look at Considine’s piece, which reproduces several of the images, including art from Lascaux as well as cherry blossoms against a clear sky, a waterspout in the Florida Keys and a group of orphan refugees from Greece and Armenia wading into the sea for the first time. How you cull 100 images out of the vast possibilities in archives around the world is a story in itself, and it’s clear that Paglen had no didactic agenda in their selection. No captions accompany the satellite-born text (although they are available in an accompanying book available through Paglen’s site). Like the cave paintings, Paglen’s images are evocative without shedding obvious meaning, capable of deep layers of interpretation and conveying a sense of shared experience.

Considine’s interview is itself moody and interesting. Here’s a bit more of it:

Sagan’s records implicitly assumed we would be around for an alien follow-up call. It tried — ambitiously, if somewhat arrogantly — to make a good first impression. “The Last Pictures” assumes it is impossible to say anything universal or lasting about humanity, and that we’ll be long gone by the time its pictures are discovered, if they’re found at all.

“This is not a project that’s supposed to explain to aliens what humans are all about and be the definitive record of human civilization,” Paglen said. It is, he added, “a collection of images that explained to somebody in the future what happened to all of the people who built the dead spaceships in orbit around the earth. And how they killed themselves.” (Or perhaps were killed?)

As art, this is work that proceeds without any certainty of a future audience, and makes its statement by that very ambiguity. If our species works its way through the thousand traps of technological growth and survives, the Paglen photographs become a time capsule of the sort we tend to stick in the cornerstone of buildings, and we can imagine humans of the future looking upon the ancient satellite as no more than a curiosity. If we don’t survive, we can imagine the same faint chance the Voyagers have of being detected and studied by some other intelligence, a thought that adds an almost unbearable poignancy to some of these images.

I wouldn’t want to try to convey the experience of an entire species through any series of images, and with a number as small as 100, the choice seems hopelessly arbitrary. But what gives the work a certain fascination is that we live in an era when we can create something that could outlive its makers not just by millennia but by eons. There will be more such things as we continue to push out into the Solar System, with space probes that continue their journeys long after they have fallen silent, and all will bear witness to the civilization that put them in motion. That in itself is evocative of the deep mystery we all face as we confront our existence, a mystery the cave painters surely felt as they captured hunters, bison and aurochs on walls of ancient stone.