Plenty of interesting news is coming out of the American Astronomical Society meeting in Long Beach CA, enough that I’ll want to spread our look at it out over the next few days. I want to start with Geoff Marcy’s investigations with grad student Erik Petigura at UC-Berkeley, the two working in tandem with Andrew Howard (University of Hawaii) on the question of Earth-sized planets and their distribution in the galaxy. But I can’t help noting before I begin how science fictional all these exoplanets are starting to seem as each day brings a new paper or announcement.

For me, science fiction has always been as much about landscape as it is about science, and exoplanets are the ultimate exercise in imagining exotic places. When exoplanet announcements were still new and we had only a small catalog of these worlds, I would find myself pondering each and thinking about what it would be like to orbit one, or stand on it. Now we’re getting hard data on potentially habitable places that evoke the compelling artwork on the covers of SF magazines I’ve read over the years. People gripe about not having flying cars or humans in the outer system, but to me the future I’ve lived into is every bit as provocative as the one that used to be portrayed in the pages of Astounding or Galaxy.

I spent yesterday afternoon thinking about the upcoming presentation of Marcy’s team at the AAS. They’ve created a new structure within which to analyze Kepler photometry for transiting planets, applying their algorithm to a sample of 12,000 G and K-class stars that were chosen because they are among the most photometrically quiet of Kepler’s targets, and thus best suited for the detection of small planets. The work focused on close-in planets with orbits between 5 and 50 days, Earth-sized worlds that are at the margin of detectability within the Kepler data.

The results show that about 17 percent of all Sun-like stars have planets in the 1-2 Earth diameter range orbiting close to their host stars — here we’re talking about distances within about 0.25 AU, which places these worlds well inside the orbit of Mercury. The team also extrapolates from its results that the fraction of stars having planets of Earth size or a bit bigger orbiting in Earth-like orbits may be as high as 50 percent. Both findings follow from the researchers’ analysis of how often planets of a particular size appear, as Andrew Howard notes:

“Our key result is that the frequency of planets increases as you go to smaller sizes, but it doesn’t increase all the way to Earth-size planets — it stays at a constant level below twice the diameter of Earth.”

In other words, there are more small planets than large ones, with perhaps one percent of stars having planets the size of Jupiter, while 10 percent have planets the size of Neptune. But Petigura’s work goes farther than this, suggesting that the increase in planets as size decreases stops when we get down to planets of about twice Earth’s diameter. The numbers then remain the same until we reach planets the size of the Earth, beyond which this analysis ends. That’s a finding that leaves plenty of room for Earth-like worlds in abundance throughout the galaxy.

Petigura’s work was clearly key for the project because it was he who developed TERRA (Transiting ExoEarth Robust Reduction Algorithm), a program through which the UC-Berkeley team fed 12 quarters of Kepler data. Petigura wanted to find out how many Earth-sized planets Kepler was missing, their faint signals lost in the ‘noise’ of a transit lightcurve. Measuring the fraction of planets Kepler wasn’t seeing, the team was able to extract 119 Earth-like worlds ranging from six times Earth’s diameter all the way down to a planet the size of Mars. Thirty-seven of the team’s planets had not been identified in the previous Kepler work. 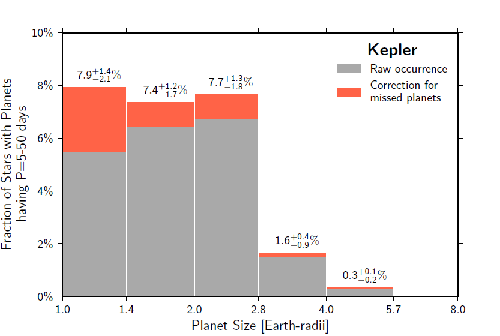 Image: The fraction of Sun-like stars having planets of different sizes, orbiting within 1/4 of the Earth-Sun distance (0.25 AU) of the host star. The graph shows that planets as small as Earth (far left) are relatively common compared to planets 8.0x the size of Earth (similar to Jupiter). For example, 7.9% of Sun-like stars harbor a planet with a size of 1.0-1.4 times the size of Earth, orbiting inward of 1/4 the Earth-Sun distance (closer than Mercury’s distance from the Sun). There are increasing numbers of planets from 8x the size of Earth down to 2.8x Earth. Remarkably, the number of planets smaller than 2.8x Earth is approximately constant with planet size, down to the size of our Earth. The gray indicates the planets discovered in this study, and the orange represents the correction applied to account for planets the TERRA software would miss statistically, typically about 20%. Credit: Image by Erik Petigura and Geoff Marcy, UC Berkeley, and Andrew Howard, Institute for Astronomy, University of Hawaii.

This study takes us another step along the way to a major exoplanet goal. Getting a sound estimate of the fraction of Sun-like stars bearing Earth-sized planets in the habitable zone — eta Earth — is tantalizingly close, and the paper on this work points out that its 12,000 stars will be among the sample from which this estimate is drawn. The Berkeley team homes in on close-in planets as a way of studying planet frequency in relation to size, the assumption being that estimates of habitable zone ‘Earths’ will tighten as we get further data. From the paper:

Our key result is the plateau of planet occurrence for the size range 1–2.8 RE for planets having periods 5-50 days. With 8 years of total photometry in an extended Kepler mission (compared to 3 years here), the computational machinery of TERRA— including its light curve de-trending, transit search, and completeness calibration—will enable a measurement of [eta Earth] for habitable zone orbits with extended mission photometry.

All in all, the team estimates that uncertainties in detection mean that Kepler misses about one in four big Earth-sized worlds, a figure this work now corrects. Planets larger than Earth in this category may often turn out to be more like Neptune than Earth, with a rocky core surrounded by helium and hydrogen — planets like these may, in close orbits, be water worlds with vast oceans and no exposed land surface. But the UC-Berkeley work gives us plenty of reason to think that rocky worlds like Earth within stellar habitable zones are going to be anything but rare.