Gas Giants in the Habitable Zone

Because the sky is full of surprises, we can’t afford to be too doctrinaire about what tomorrow’s discovery might be. After all, ‘hot Jupiters’ were considered wildly unlikely by all but a few, and even here in the Solar System, probes like our Voyagers have turned up one startling thing after another — volcanoes on Io were predicted just before Voyager arrived, but who thought we’d actually see them in the act of erupting? So I don’t think we can rule out the idea of habitable moons around a gas giant in the habitable zone, but there are reasons to question how numerous they would be.

We’ve had this discussion before on Centauri Dreams, and while I love the idea of a huge ‘Jupiter’ hanging in the sky of a verdant, life-bearing planet, there are some factors that argue against it, as reader FrankH pointed out recently. One problem is that moons around a gas giant will probably be made largely of ice and rock, because the planet itself would have formed beyond the snow line and migrated into the habitable zone. A Mars-sized moon is going to melt and, given its low escape velocity, will gradually lose its atmosphere in these warmer regions.

We could imagine capture scenarios as a migrating gas giant moves into the warm inner system, but it’s hard to see that as a frequent occurrence. The key question for me would be what factors govern the formation of gas giant moons in the first place, and what is the likelihood of finding moons much larger than Mars? David Kipping’s continuing exomoon work has suggested we could detect a moon of approximately 0.2 Earth masses with existing technology, but this is far larger than Ganymede, and we have no analog in our own Solar System. 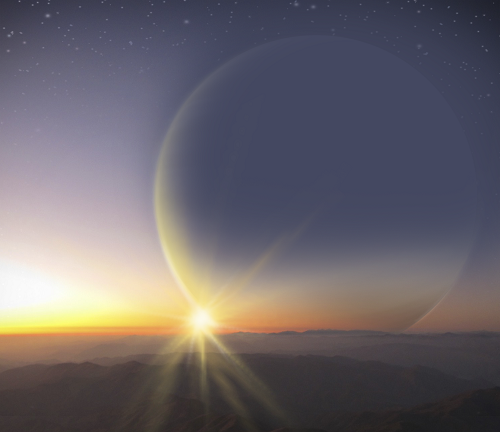 Image: An artist’s rendition of a sunset view from the perspective of an imagined Earth-like moon orbiting the giant planet, PH2 b. The scene is spectacular, but how likely is it that gas giants would have moons beyond Mars size? The answer to the question awaits further work in exomoon detection. Credit: H. Giguere, M. Giguere/Yale University.

So we continue the hunt and the speculation. All this comes to mind because of the discovery of PH2 b-a, the second planet to be confirmed by the Planet Hunters project. The volunteers of Planet Hunters come from all walks of life and use their computers to analyze public domain data from the Kepler mission. The idea behind the project was that humans, with their unique gift of pattern recognition, might see things in light curves that Kepler’s algorithms had missed. Debra Fischer (Yale University), lead scientist for Planet Hunters, champions the idea, particularly in light of the most recent findings, which include a number of other candidates:

“We are seeing the emergence of a new era in the Planet Hunters project where our volunteers seem to be at least as efficient as the computer algorithms at finding planets orbiting at habitable zone distances from the host stars. Now, the hunt is not just targeting any old exoplanet – volunteers are homing in on habitable worlds.”

The estimated surface temperature on PH2 b-a is 46 degrees Celsius, so we are indeed in the habitable zone but without any evidence of moons circling the gas giant. Work with the HIRES spectrograph and NIRC2 adaptive optics system on the Keck telescopes on Mauna Kea has confirmed the existence of the planet, which had been detected by volunteers examining Kepler lightcurves. All told, Planet Hunters identifies in the paper on this work 43 new discoveries, most of which have orbital periods above 100 days. The findings increase the number of gas giant planet candidates with orbital periods over 100 days and radii between Neptune and Jupiter by thirty percent. Nine candidates are members of multi-planet systems. And note this:

Among these new candidates, twenty appear to orbit at distances where the temperature at the top of the atmosphere would be consistent with temperatures in habitable zones. Most of these habitable zone planet candidates have radii comparable to or larger than Neptune; however, one candidate (KIC 4947556) has a radius of 2.60±0.08 R⊕ and may be a SuperEarth or mini-Neptune.

Whether or not the imagined habitable moons exist, this is outstanding work and a tribute to the power of ‘citizen science’ in identifying candidates that the Kepler automatic detection and validation pipeline overlooked. The paper on the latest detections runs through the project’s previous candidates and the confirmed planet PH1 b, an interesting world in a 137-day circumbinary orbit around an eclipsing binary in a quadruple star system. The paper adds that Planet Hunters volunteers are most effective at detecting transit candidates with radii larger than 4 Earth radii, while smaller worlds are best retrieved through mathematical algorithms.