I for one am astounded at the fact that it has been seven years since the launch of New Horizons. The craft, now more than halfway between the orbits of Uranus and Neptune, lifted off on January 19, 2006. I remember my frustration at having hundreds of cable channels on my television and not being able to see the New Horizons launch on any of them. I wound up tracking the event on a balky Internet transmission that, despite freezing up on more than one occasion, still got across the magic of punching this mission out into the deepest parts of the Solar System.

With the flyby at Pluto/Charon in 2015, principal investigator Alan Stern is describing what his team is feeling as ‘the seven year itch,’ a sense of anticipation feeding off the spacecraft’s continued good health along the way. Stern’s latest report is online, noting that the current ‘wake period’ of the spacecraft (New Horizons was in hibernation from July of 2012 until January 6) is proceeding smoothly, including upload of new software. New Horizons goes back to sleep on January 30 and stays under until deep into May, when summer encounter rehearsals begin. We have 903 days until Pluto closest approach. 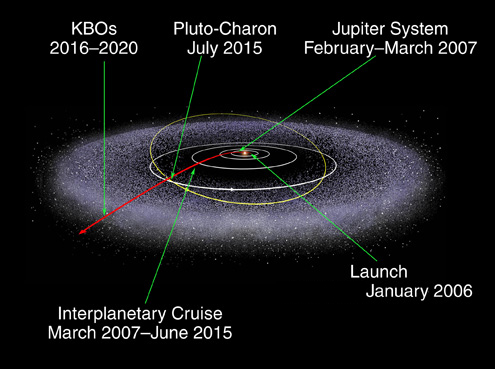 Image: The journey of New Horizons past Pluto/Charon and on into the Kuiper Belt. Credit: JHU/APL.

We should get a lot of updated information about Pluto/Charon this summer when the Johns Hopkins Applied Physics Laboratory hosts a conference devoted to the distant worlds, one that will include planning for the observations that will take place during the all too brief encounter. Stern notes that the question he is most frequently asked about the mission is why New Horizons will not pull into an orbit around Pluto for extended observations, a question easily enough answered:

…getting into orbit isn’t practical because of our speed. Remember, New Horizons was the fastest spacecraft ever launched. Even after climbing uphill against the Sun’s gravity for nine years, when we reach Pluto we’ll still be going 30,000-plus miles per hour — very roughly twice the speed of a space shuttle or satellite in Earth orbit. To enter orbit around Pluto we’d need to bleed almost all of that speed off with rockets. And that would require very large rocket engines and a lot of fuel, given our fast trajectory.

Orbiting Pluto would have made for a much longer flight — decades longer — and in any case pushing on into the Kuiper Belt allows further explorations as the mission continues. This is probably the place to note that although New Horizons left Earth orbit traveling faster than any other vehicle launched into interplanetary space, its 14 kilometer per second speed at Pluto/Charon is below Voyager 1’s 17 kilometers per second-plus — as Stern says, the spacecraft has been climbing out of the gravity well for the last nine years, and slowing.

We turn to Helios II, though, for the title of fastest man-made object, although the Helios probes, launched in 1974 and 1976, were designed to study the Sun rather than to leave the system. Both were placed into highly elliptical orbits that, at closest approach, reached speeds in the range of 70 kilometers per second. It’s worth noting, too, that the upcoming Solar Probe Plus mission, also the work of JHU/APL, would actually triple Helios II’s velocity. Solar Probe Plus is designed to fly into the Sun’s corona for the first time, giving us a wealth of information about how the solar wind is accelerated. If all goes well, the mission will launch in July of 2018.

Slow boat to Centauri? Well, imagine that you could get a spacecraft up to Solar Probe Plus speeds not approaching the Sun but leaving the Solar System, no small feat. Point the craft in the direction of Centauri A and B and you’d be able to make the crossing in a bit over 6000 years. You’re making a good deal less than 1 tenth of one percent of light speed here, with an interstellar ship design that had better be either a worldship or a robotic probe designed for long-haul operations. As always, interstellar distances take the breath away as we ponder even the nearest stars.

Previous post: The Last Pictures: Contemporary Pessimism and Hope for the Future