While radial velocity and transit methods seem to get most of the headlines in exoplanet work, there are times when direct imaging can clarify things found by the other techniques. A case in point is the HAT-P-7 planetary system some 1000 light years from Earth in the constellation Cygnus. HAT-P-7b was interesting enough to begin with given its retrograde orbit around the primary (meaning its orbit was opposite to the spin of its star). Learning how a planet can emerge in a retrograde orbit demands learning more about the system at large, which is why scientists from the University of Tokyo began taking high contrast images of the HAT-P-7 system.

It had been Norio Narita (National Astronomical Observatory of Japan) who, in 2008, discovered evidence of HAT-P-7b’s retrograde orbit. Narita’s team has now used adaptive optics at the Subaru Telescope to measure the proper motion of what turns out to be a small companion star now designated HAT-P-7B. The team was also able to confirm a second planet candidate that had been first reported in 2009. The latter, a gas giant dubbed HAT-P-7c, orbits between the orbits of the retrograde planet (HAT-P-7b) and the newfound companion star. 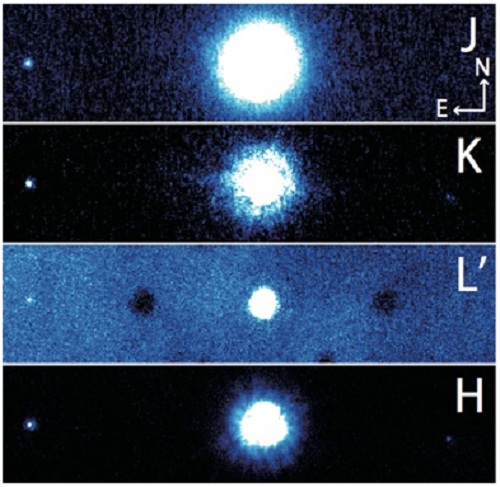 Image: HAT-P-7 and its companion star in images obtained with the Subaru Telescope. IRCS (Infrared Camera and Spectrograph) captured the images in J band (1.25 micron), K band (2.20 micron), and L’ band (3.77 micron) in August 2011, and HiCIAO captured the image in H band (1.63 micron) in July 2012. North is up and east is left. The star in the middle is the central star HAT-P-7, and the one on the east (left) side is the companion star HAT-P-7B, which is separated from HAT-P-7 by more than about 1200 AU. The companion is a star with a low mass only a quarter of that of the Sun. The object on the west (right) side is a very distant, unrelated background star. (Credit: NAOJ)

This Subaru Telescope news release notes the current thinking of Narita’s team on how the retrograde orbit emerged in this system. Key to the puzzle is the Kozai mechanism, first described in the 1960s, which has been found to explain the irregular orbits of everything from irregular planetary moons to trans-Neptunian objects, and has been applied to various exoplanets. The Kozai mechanism says that orbital eccentricity can become orbital inclination, with perturbations leading to the periodic exchange of the two. In other words, what had been a circular but highly-inclined orbit can become an eccentric orbit at a lower inclination.

Ultimately, the effects can be far-reaching as planetary orbits change over time. Can the process be sequential? In the HAT-P-7 system, the researchers are suggesting that the companion star (HAT-P-7B) affected the orbit of the newly confirmed planet HAT-P-7c through the Kozai mechanism, causing orbital eccentricity to be exchanged for inclination. With its orbit now significantly inclined in relation to the central star, Hat-P-7c then affected the inner planet (HAT-P-7b) through the same mechanism, causing its orbit to become retrograde.

The researchers go on to make the case for direct imaging to check for stellar companions that can have a significant effect on planetary orbits. From the paper:

Thus far, the existence of possible faint outer companions around planetary systems has not been checked and is often overlooked, even though the Kozai migration models assume the presence of an outer companion. To further discuss planetary migration using the information of the RM [Rossiter-McLaughlin] eﬀect / spot-crossing events as well as signiﬁcant orbital eccentricities, it is important to incorporate information regarding the possible or known existence of binary companions. This is also because a large fraction of the stars in the universe form binary systems… Thus it would be important to check the presence of faint binary companions by high-contrast direct imaging. In addition, if any outer binary companion is found, it is also necessary to consider the possibility of sequential Kozai migration in the system, since planet-planet scattering, if it occurs, is likely to form the initial condition of such planetary migration.

We have much to learn about retrograde orbits and the rippling effects of the Kozai mechanism are a possibility that will have to be weighed against other observations. Whether the researchers can make this case stick or not, the fact that so many ‘hot Jupiters’ are themselves in highly inclined or even retrograde orbits tells us how important it will be to work these findings into our theories of planet formation and migration. Direct imaging from the SEEDS project (Strategic Exploration of Exoplanets and Disks with Subaru Telescope) should prove useful as we continue to work on direct imaging of exoplanets around hundreds of nearby stars.