Air travel presents us with challenges we seldom anticipate. Flying into Charlotte on Sunday I had developed a ferocious headache. I was headed to the Tennessee Valley Interstellar Workshop in Huntsville and had a long enough layover in Charlotte to seek out a pain reliever with decongestant properties. The ridiculous thing was that I couldn’t get the plastic mini-pack open. The little symbol showed me tearing off the corner of the packet, but it wouldn’t tear for me, and it wouldn’t tear for the guy who happened to be sitting next to me at the USAir gate.

It became clear that I needed something sharp to get into this packet, but it was also clear that I was in an airport, the very definition of which these days is to prevent passengers from having anything sharp. I finally took the packet back to the kiosk I bought it from and demanded redress. The lady looked askance at me, looked at the packet, and opened it effortlessly. Further comment seems superfluous. 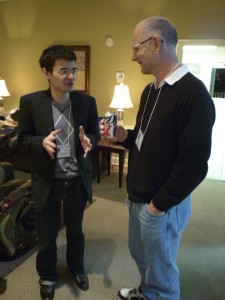 By the time I got off the plane in Huntsville the headache was much better, and I was surprised to find my shoulder tapped by Andreas Hein, who heads Icarus Interstellar’s worldship project, called Hyperion. We shared a taxi to the hotel, where the lobby was stuffed with interstellar folk like Rob Swinney, now project head for Project Icarus, Claudio Maccone (who will give a keynote on Tuesday), Kelvin Long (head of the Institute for Interstellar Studies) and my buddy Al Jackson, just in from Houston. Al was kind enough later to drive me over to the venue for the evening reception, pictures of which you see here. Al and I owe much to his Garmin GPS. 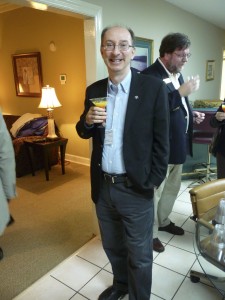 The conference — or in this case ‘workshop’ — dilemma is again facing me. There was a day when I thought ‘live blogging’ would make sense for Centauri Dreams, but the more examples of live blogging I read, the less I like the idea. At both 100 Year Starship conferences I mainly sent out tweets, finding Twitter an interesting platform for conference coverage, but one that nonetheless distracted me from making the kind of detailed notes I needed to be working with, just as live blogging did. So this time around, although I may do the occasional tweet (@centauri_dreams), I’ll mostly be paying attention to the speakers and making notes that will turn into more coverage after the workshop is over.

So bear with me if Centauri Dreams is off its regular schedule for a few days, though I’ll slip things in wherever possible, and next week we’ll take a close look at the papers here. Meanwhile, there should be no interruption in comment moderation, which I’ll get to as time allows. I will tell you this for now. Robert Kennedy (The Ultimax Group) makes a drink called the Alpha Centauri Sunrise, and I have not only had one, but have also snapped a surreptitious photo of the recipe. Robert later said it would be OK for me to share it, so at some point during the week, I’ll explain how to make this estimable drink. Hint: Three berries are involved. And moonshine.