After Huntsville, a Red Dwarf Bonanza

Returning from Huntsville after the Tennessee Valley Interstellar Workshop, I was catching up on emails at the airport when the latest news about exoplanets and red dwarfs popped up on CNN. It was heartening to look around the Huntsville airport and see that people who had been reading or using their computers were all looking up at the screen and following the CNN story, which was no more than a thirty second summary. The interest in exoplanets is out there and may bode good things for public engagement in space matters. At least let’s hope so.

The workshop was a great success, and congratulations are owed to Les Johnson, Robert Kennedy, Eric Hughes and the entire team that made this happen (a special nod to Martha Knowles and Yohon Lo!). This morning I want to focus on the exoplanet news as a way of getting back on schedule, but tomorrow I’ll start going through my notes and talking about the Huntsville gathering. I’m hoping to have several articles in coming weeks from participants in the event on the work they are doing, and I have plenty of comments about the presentations, so the Huntsville coverage that begins tomorrow should extend into next week.

As to the exoplanet news, Courtney Dressing (Harvard-Smithsonian Center for Astrophysics) went to work on the Kepler catalog of 158,000 stars to cull out all the red dwarfs. She and the CfA’s David Charbonneau found that almost all of the identified stars were smaller and cooler than had been thought, which has the effect of lowering the size of the detected planets. An additional result is to move the habitable zone somewhat further in. The duo could find 95 planet candidates among these red dwarfs. 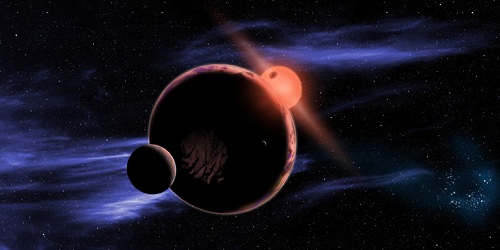 Image: This artist’s conception shows a hypothetical habitable planet with two moons orbiting a red dwarf star. Astronomers have found that 6 percent of all red dwarf stars have an Earth-sized planet in the habitable zone, which is warm enough for liquid water on the planet’s surface. Since red dwarf stars are so common, then statistically the closest Earth-like planet should be only 13 light-years away. Credit: David A. Aguilar (CfA)

Let’s pause for a moment on the analysis. Dressing and Charbonneau were comparing the observed colors of the stars to a model developed by the Dartmouth Stellar Evolutionary Program. The final sample in the study contained 3897 dwarf stars with revised temperatures cooler than 4000 K, and the revisions to stellar temperatures brought the stars down 130 K in temperature while reducing their size by 31 percent. The analysis proceeded to refit the light curves of the planet candidates to get a better understanding of their radii.

I wish I could have tracked the news conference live but was in transit at the crucial moments. Those of you who also missed it may want to check the archived version at the CFA’s site. The key point is on the opening slide: “Earth-like Planets Are Right Next Door.” Which is something of a stretch because we are talking about M-class stars where a planet in the habitable zone is probably tidally locked. Assuming (and it’s an open question) whether a benign climate for carbon-based life could exist on such a planet, it’s still an environment much different from the Earth, with a star that stays in the same position in the sky and night and day are endless.

Still, this is interesting news: The 95 planetary candidates imply statistically that at least 60 percent of red dwarfs have planets smaller than Neptune. Out of the 95, only three were close enough to Earth in terms of size and temperature to be considered ‘Earth-like.’ In other words, about six percent of all red dwarfs are found to have a planet like the Earth. 75 percent of the closest stars to the Sun are red dwarfs, leading Dressing to calculate that the closest Earth-like world is likely to be no more than 13 light years away. Again, this is for red dwarfs. The analysis of other stellar types like the intriguing G- and K-class stars Centauri A and B continues.

Here’s the payoff, from the paper. The authors have just noted that the high rate of habitable zone planets around nearby stars means that future missions designed to study these worlds will have plenty to work with::

I mentioned the G- and K-class stars Centauri A and B above, but I don’t want to leave the third element of the trio out, it being a red dwarf. The radial velocity work on Proxima Centauri continues, allowing us to constrain the size of possible planets usefully. This is not part of Dressing and Charbonneau’s study, but I’ll mention it here because it’s obviously germane. Using seven years of UVES spectrograph data from the European Southern Observatory, Michael Endl (University of Texas) and team have found no planet of Neptune mass or above out to 1 AU from Proxima, and no ‘super-Earths’ above 8.5 Earth masses in orbits of less than 100 days.

As to Proxima’s tight habitable zone (0.022 to 0.054 AU), no ‘super-Earths’ above about two to three Earth masses exist here. The habitable zone around Proxima corresponds to orbits ranging from 3.6 to 13.8 days, and you can see that we still have plenty of room for an interesting Earth or Mars-sized world around this closest of all stars to Earth. Adding more data points to what we already have on Proxima should gradually allow us to get to a better idea of what’s actually there.

But back to Dressing and Charbonneau’s red dwarfs. The three habitable zone candidates are Kepler Object of Interest (KOI) 1422.02 (90 percent Earth size in a 20-day orbit); KOI 2626.01 (1.4 Earth size in a 38-day orbit); and KOI 854.01 (1.7 times Earth size in a 56-day orbit). None of these are closer than 300 light years. The paper points out that while Kepler will need several more years of observation to detect Earth-size planets in the habitable zones of G-class stars (this is due to higher than expected stellar noise), the observatory is already able to detect Earth-size planets in the habitable zone of red dwarfs. We get not one but many transits per year and we have 1.8 times more likelihood of a transit than around a star like the Sun.

Thus we get this:

…the transit signal of an Earth-size planet orbiting a 3800K M star is 3.3 times deeper than the transit of an Earth-size planet across a G star because the star is 45% smaller than the Sun. The combination of a shorter orbital period, an increased transit probability, and a deeper transit depth greatly reduces the diﬃculty of detecting a habitable planet and has motivated numerous planet surveys to target M dwarfs…

Another advantage of M dwarfs is that confirming a planetary candidate is made easier because the radial velocity signal of a habitable planet here is considerably larger than that of a habitable zone planet around a G-class star. Given that the James Webb Space Telescope should be able to take spectra of Earth-sized planets in the habitable zone around M-dwarfs — and that it cannot do this for comparable planets around more massive stars — our first atmospheric readings from a habitable zone planet are probably going to come from these small red stars.

The paper is Dressing and Charbonneau, “The Occurrence Rate of Small Planets Around Small Stars,” to be published in The Astrophysical Journal (draft version online).