I conceived an early love for Tennyson, but it wasn’t until a bit later in life that I ran into his “Locksley Hall,” which contains lines many science fiction fans are familiar with:

Many a night I saw the Pleiads, rising thro’ the mellow shade,
Glitter like a swarm of fire-flies tangled in a silver braid.

Here about the beach I wander’d, nourishing a youth sublime
With the fairy tales of science, and the long result of Time;

When the centuries behind me like a fruitful land reposed;
When I clung to all the present for the promise that it closed:

When I dipt into the future far as human eye could see;
Saw the Vision of the world and all the wonder that would be.—

and so on. The poem is the lament of a soldier returning to the places of his boyhood and eventually turning his thoughts, and his resolve, on the future. When I read the line ‘the long result of time,’ I realized that it was here that I found resonance with the poet. The idea of a remote futurity and the need to build its foundations now was a powerful motivator.

A sense of that futurity pervaded our recent sessions at the Tennessee Valley Interstellar Workshop in Huntsville. Several speakers alluded to instances in human history where people looked well beyond their own generation, a natural thought for a conference discussing technologies that might take decades if not centuries to achieve. We talked about a solar power project that might take 35 years, or perhaps 50 (much more about this in coming days). 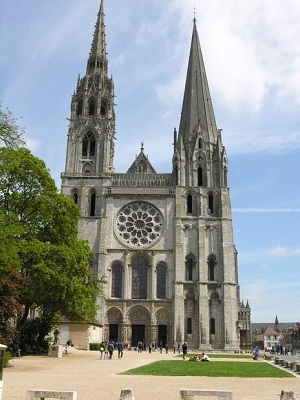 The theme became explicit when educator and blogger Mike Mongo talked about getting interstellar issues across to the public, referring to vast projects like the pyramids and the great cathedrals of Europe. Cathedrals are a fascinating study in their own right, and it’s worth pausing on them as we ponder long-term notions. Although they’re often considered classic instances of people building for a remote future, some cathedrals were built surprisingly quickly. Anyone who has stood in awe at the magnificent lines of Chartres southwest of Paris is surprised to learn that it came together in less than 60 years (the main structure in a scant 26), though keep in mind that this was partly a reconstruction of an earlier structure that dated back to 1145.

Image: The great cathedral at Chartres.

With unstinting public support, such things could happen even with the engineering of the day, creating what historians now view as the high point of French Gothic art. Each cathedral, of course, tells its own tale. Salisbury Cathedral was completed except for its spire in 45 years. Other cathedrals took longer. Notre Dame in Paris was the work of a century, as was Lincoln Cathedral, while the record for cathedral construction surely belongs to Cologne, where the foundation stone was laid in 1248. By the time of the Reformation 300 years later, the roof was still unfinished, and later turmoil pushed the completion of the cathedral all the way into the 19th Century, with many stops and starts along the way.

Remember, too, that the cathedral builders lived at a time when the average lifespan was in the 30s. The 15-year old boy who started working on the foundation of a cathedral might have hoped to see its consecration but he surely knew the odds didn’t favor it. Humans are remarkably good at this kind of thing, even if the frenetic pace and short-term focus of our times makes us forget it. Robert Kennedy pointed out to me at the conference that the Dutch dike system has been maintained for over 500 years, and can actually be traced back as far as the 9th Century. The idea of technology-building across generations is hardly something new to our civilization.

The ‘long result’ context is an interesting one in which to place our interstellar thinking. Naturally we’d like to make things happen faster than the 4000-year plus journeys I talked about on Friday with worldships, though my guess is that as the species becomes truly spacefaring and begins to differentiate, we’ll see colonies aboard O’Neill-class cylinders holding thousands, many of the colonists being people who will spend less and less time on a planetary surface. At some point, it would be entirely natural to see one of these groups decide to head into the interstellar deep. They would be, after all, taking their world with them, a world that was already home.

Gerald Driggers is a retired engineer and current science fiction author who worked with Gerald O’Neill in the 1970s. I see him as worldship material because he has chosen for the last seventeen years to live on a boat, saying “It was the closest thing I could get to a space ship.” Driggers believes we can begin our interstellar work by getting humans to Mars, where they will be faced with many of the challenges that will attend much longer-term missions. We must, after all, build a system-wide infrastructure, mastering the complexities of power generation and resource extraction on entirely new scales, before we can truly hope to go interstellar.

And what happens to humans as they begin working in extreme environments? Evolution doesn’t stop when we leave the planet, as Freeman Dyson is so fond of pointing out. These are changes that should be beneficial, says Driggers. “Evolutionary steps toward becoming interstellar voyagers reduce the chances for human failures on these journeys. We’re going to change, and we will continue to change as we look toward longer voyages. The first humans to arrive around another star system probably won’t be like anybody in the audience today.” Responding to evolutionary change, Martians may make the best designers and builders of interstellar craft. 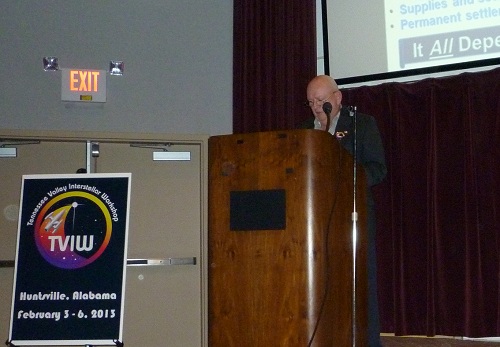 Get it right on Mars, in other words, and we get it right elsewhere and learn the basics of infrastructure building all the way to the Kuiper Belt, with active lunar settlements and plentiful activity among the asteroids. Along the way we adapt, we change. Driggers’ worst-case scenario has Martian settlements delayed until the mid-22nd Century, but he is hopeful that the date can be moved up and the infrastructure begun.

All of which brings me back to something Mike Mongo talked about. We are not going to the stars ourselves, but we can inspire and train people who will solve many of the technical problems going forward, just as they train the next generation. One of these generations will one day train the crew of the first human interstellar mission, or if we settle on robotics, the controllers who will manage our first probes. Placing ourselves in the context of the long result acknowledges our obligation to future generations as we begin putting foundation stones in place.