One of the things I love about writing Centauri Dreams is that I learn something new every day. Often this comes from the research needed for individual stories, but just as often it comes from readers suggesting new directions or seeing nuances in an earlier story that I had missed. Yesterday’s post on long-term thinking led to an exchange with Centauri Dreams regular NS, who questioned my ideas on longevity in the Middle Ages, and before long we were both digging up data to try to discover what the numbers really are. It’s an ongoing process, and if you’re interested in such arcana, you can follow it in yesterday’s comments thread.

If you’re just joining us and wondering why we’re discussing medieval longevity, it ties into what I was saying about long-haul construction projects like cathedrals, and the question of what a worker on one of these projects might have thought of his chances of seeing its completion. You can also chalk it up to a fascination with the Middle Ages that has always preoccupied me.

Of course, my interest in long-haul projects doesn’t mean I wouldn’t welcome much faster transportation methods to get to the stars than the worldships I sometimes write about. My friends at Icarus Interstellar have their own worldship study, Project Hyperion, in progress in the capable hands of Andreas Hein, but they also have as their centerpiece Project Icarus, which is an attempt to design a fusion starship that some of their members believe can fly in this century. This seems wildly optimistic to me but I would love to be proven wrong. Icarus Interstellar president Richard Obousy discussed all these matters at the recent workshop in Huntsville.

An Eye on Breakthrough Propulsion

“Interstellar Flight from Conception to Reality” was the title of his talk, and in it Obousy made the case that one of the drivers for the new enthusiasm for interstellar flight is the wildly accelerating pace of exoplanet discovery. He sees exploration as the ‘expression of a curious and energetic species,’ one also becoming aware of the need for planetary defense and the imperative for developing skills in deep space. But one of his key points — and I’ve heard him say this before — is that we tend to overestimate what we can do on a short time-frame, and underestimate what we can do over longer periods. 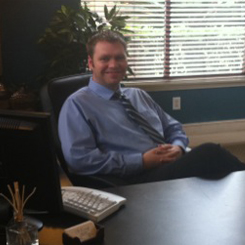 It’s a heartening thought for me because it means interstellar flight might take place sooner than the several centuries ahead I normally consign it to. Obousy ran through key discoveries at the atomic level, pointing out that it was no more than 70 years after we refined the model of the atom through the discovery of electrons, protons and neutrons that we developed the first nuclear thermal rocket. The history of flight tells the same tale. We have gone from theory to experiment to useful technology in a numbingly short time, from Kitty Hawk to the Moon landings.

Image: I don’t know why Richard Obousy would be difficult to photograph, but my shots of him from the conference all had one or another thing wrong with them, so I’m pulling this one from the Icarus Interstellar site.

While running through interstellar options from fusion to antimatter, Obousy told the Huntsville audience that he had a deep interest in breakthrough propulsion ideas, the kind of thing once actively studied at NASA through the Breakthrough Propulsion Physics project under Marc Millis. If we can go from Maxwell’s equations on electromagnetism to the world we see today in so short a time, what might we pull out of the theoretical physics of dark energy in another hundred years? In a way, it could be said that the Victorian era was the birthplace of the nuclear rocket, and Obousy wonders what string theory, supersymmetry, dark energy and dark matter may ultimately lead to as we take a similar path from theory to experiment to technology.

“Theoretical physics is the key to a future interstellar civilization,” Obousy said, suggesting that a world-class technical team could grow up around these ideas working one day with a breakthrough propulsion physics research lab. Icarus Interstellar obviously has such a project in mind as Obousy charts its future direction, and the beauty of the approach is that in gathering momentum, such an effort need not be costly, for the emphasis right now remains on theory rather than experiment as we chart the early stages of some of these concepts. We have much to learn. What constraints do the laws of physics place on advanced civilizations? What exactly is the dark energy field that evidently exerts negative pressure on spacetime?

Kelvin Long, president of the Institute for Interstellar Studies and editor of the Journal of the British Interplanetary Society, noted in his talk that a 2007 BIS conference had worked through many of the issues raised by Miguel Alcubierre in an often-referenced 1994 paper. It was Alcubierre who studied how spacetime could be warped to accelerate a spacecraft, identifying the basic physics problems that would have to be solved if such a thing were to happen (the conference identified nineteen of these, a daunting figure). The premise here is that while no object can move through spacetime faster than light, spacetime itself has no such restriction, as assumed through theories of cosmic inflation in the early moments of the universe. 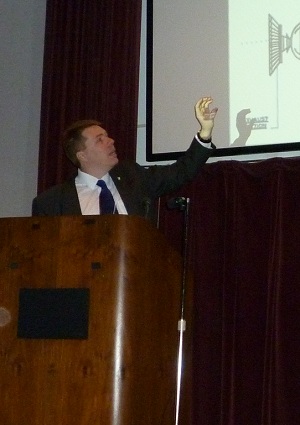 But Long paused only briefly on Alcubierre. His intent was to offer an overview of interstellar concepts, and in doing so he ran through the contribution made by the BIS not only with an early Moon mission design but also through Project Daedalus, the fusion starship that came out of late-night sessions in various London pubs back in the 1970s (particularly the Mason’s Arms, I’m told — is it still there?). At the party before the conference, Kelvin talked to me about his view that interstellar studies really began with Les Shepherd’s 1952 paper “Interstellar Flight” (JBIS, Vol. 11, pp. 149-167). I think it’s a reasonable assumption, because Shepherd’s was the first paper I know of to approach the question with true scientific rigor.

In fact, Shepherd did a little worldship building of his own, as I noted in an obituary of the man written about a year ago. I’ll run the same quote I did then to make the point:

It is obvious that a vehicle carrying a colony of men to a new system should be a veritable Noah’s Ark. Many other creatures besides man might be needed to colonize the other world. Similarly, a wide range of flora would need to be carried. A very careful control of population would be required, particularly in view of the large number of generations involved. This would apply alike to humankind and all creatures transported. Life would go on in the vehicle in a closed cycle, it would be a completely self-contained world. For this and many other obvious reasons the vehicle would assume huge proportions: it would, in fact, be a very small planetoid, weighing perhaps a million tons excluding the dead weight of propellants and fuel. Even this would be pitifully small, but clever design might make it a sufficiently varied world to make living bearable.

But the paper goes on to look at antimatter options that could take starships up to relativistic speeds and considers not only time dilation but also the problems of running into stray gas and dust along the way. It’s a classic that’s well worth re-reading today. And it’s worth remembering that the JBIS ‘red cover’ issues devoted to interstellar studies set the standard for innovative thinking on the topic for many years. Although the British Interplanetary Society has run into a host of problems in the past few years, it’s heartening to see how much Kelvin has achieved as the new editor of JBIS in getting the publication back on schedule. Well done, sir.

I won’t go through all the interstellar propulsion concepts that Long and Obousy presented because they’re already part of our continuing discussion in these pages. Instead, I’ve asked both for a Centauri Dreams contribution, Obousy to talk about where Icarus Interstellar now stands and Long to give us more about JBIS and its history, including the fascinating fact that Project Daedalus came about largely to make a point about the Fermi paradox. Calling Daedalus ‘a balance between being credible and being bold,’ Long noted that even the most improbable starship design — if it could be shown to be feasible for future engineering — would have ramifications for Fermi’s ‘where are they’? question.

More on this in coming days, along with a series of stories on a space power concept that would constitute an essential early step in our building of a system-wide infrastructure. I’m also hoping to discuss an idea that is making a comeback, the colony starships of Robert Enzmann. Consolidating ideas from the Huntsville conference should keep me busy for quite some time.