Resources Between the Stars

Yesterday we looked at the possibility of colonizing worlds much different from the Earth. Seen in one light, pushing out into the Kuiper Belt and building settlements there is part of a slow migration to the stars that may occur without necessarily being driven by that purpose. Seen in another, experimenting with human settlements in extreme environments is a way of exploiting the resources of nearby space, pushing the human presence out into the Oort Cloud. Either way, we can find places that, while not ‘habitable’ in the classic sense of liquid water at the surface, are nonetheless colonizable.

In his Tale of Two Worlds, novelist Karl Schroeder works on a definition of a colonizable world. It has to have an accessible surface, for one thing, meaning one we can work with — obviously a surface gravity of 4 g’s is going to be a problem. Much smaller worlds like Pluto, as we saw yesterday in Ken Roy’s work on possible colonies there, pose less of a challenge, as we can imagine strategies to produce one g for the inhabitants. Schroeder also notes there has to be a manageable flow of energy at the surface in which we can move heat around. That seems reasonable enough, although advanced technologies will have a wider zone than we have.

But I found Schroeder’s third point interesting. Here he’s drawing on a 1978 paper in Science called “The Age of Substitutibility,” by Harold Goeller and Alvin Weinberg (Oak Ridge National Laboratory), in which the authors describe the artificial mineral they call ‘demandite.’ It comes, as Schroeder notes, in two forms:

A molecule of industrial demandite would contain all the elements necessary for industrial manufacturing and construction, in the proportions that you’d get if you took, say, an average city and ground it up into a fine pulp. There’re about 20 elements in industrial demandite including carbon, iron, sodium, chlorine etc. Biological demandite, on the other hand, is made up almost entirely of just six elements: hydrogen, oxygen, carbon, nitrogen, phosphorus and sulfur. (If you ground up an entire ecosystem and looked at the proportions of these elements making it up, you could in fact find an existing molecule that has exactly the same proportions. It’s called cellulose.)

The point is that the right elements have to be accessible on the object you’re trying to live on to make it colonizable. Now if you can find a place that meets the three criteria, surprising things can happen. Centauri B b looks to be a nightmarish place, probably tidally locked and roiling with lava on its day side, and almost certainly without a breathable atmosphere. But from the standpoint of colonizability, we can’t rule out the night side, and the fact that this (still unconfirmed) world has a surface gravity about the same as Earth’s also works in its favor.

From the Kuiper Belt Past Proxima

Ken Roy’s talk at Huntsville looked at places that seemed equally inhospitable, but which may have the necessary resources to provide an advanced human civilization with what it needs to create settlements there, whether as part of a deliberate interstellar migration or simple exploration. Yesterday I focused on Pluto, but of course the Kuiper Belt is stuffed with objects, hundreds of which may be Pluto-sized, while cometary bodies in the Oort Cloud are thought to number in the trillions, based on the study of long-period comets and their frequency.

Like Schroeder, Roy is interested in brown dwarf possibilities as well. The odds on our finding a brown dwarf closer than Proxima Centauri are dwindling, though I don’t think we can rule out a possible ultra-cool Y dwarf in this space (please correct me with any updated information). In any event, the WISE mission (Wide-field Infared Survey Explorer) has shown us that brown dwarfs are less common than we thought. WISE has discovered 200 brown dwarfs (including 13 Y dwarfs), 33 of which are within 26 light years of the Sun. Given that there are 211 stars in the same volume of space, we’ve found that there are about six stars for every brown dwarf.

If they’re not as abundant as we had thought, brown dwarfs may still become useful staging areas for far-future interstellar expeditions, for we know that some have accretion disks that indicate the possibility of planet formation. I’ve written before about brown dwarf habitable zones (see Brown Dwarfs and Habitability), but Roy’s point is that whether or not we find a world that’s habitable in the classic sense, we can still assume we’ll find the same kind of small, icy planets we see in our own Kuiper Belt, and the same technologies could exploit them.

Roy is one of those intrigued with the idea of ‘rogue’ planets that move through the interstellar deep far from any star. We know little about these worlds, but it’s assumed that great numbers of them are out there, doubtless the result of gravitational interactions in young solar systems that caused them to be ejected. Dorian Abbot and Eric Switzer (University of Chicago) call these ‘steppenwolf’ planets because they ‘exist like a lone wolf wandering over the galactic steppe.’ 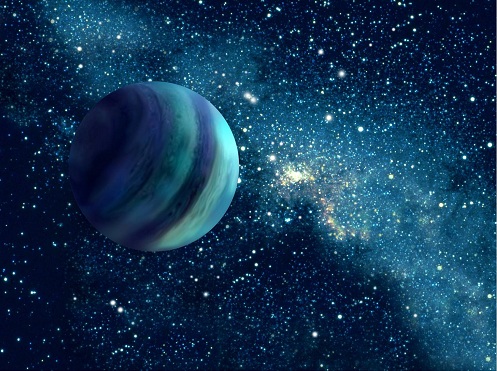 Image: A ‘steppenwolf’ planet moving between the stars. Credit: NASA/JPL-Caltech.

Louis Strigari (Stanford University) has estimated that as many as 105 objects larger than Pluto exist for every main sequence star. If that’s anywhere like the case, then rogue planets ranging between the size of Ceres and Jupiter should be out there in abundance, and we can hope to put some constraints on their numbers through future gravitational microlensing surveys and even exoplanet transit studies, which may catch a rogue planet’s transit. Some studies show that radiogenic heating from the planetary core could keep an ocean under crustal ice liquid for billions of years even out here, where there is no star to provide warmth.

Deep space is not without resources, as we’re learning every day. Roy told the audience in Huntsville that cometary objects from the Kuiper Belt to the Oort Cloud should offer CO2, ammonia, methane, oxygen, carbon and nitrogen, while we can exploit asteroids for silicates and metals. We can only imagine what resources might be available in unattached worlds moving between the stars. This is all work for a civilization that has built a thriving deep space infrastructure, but then, thinking about the future is what we do here.