The planetary system around Kepler-37, some 210 light years from Earth in the constellation Lyra, had its place in the media spotlight yesterday, although it will surely be a brief one. But it’s heartening to see the quickening interest in exoplanets that each new discovery brings. Will the interest continue? In the Apollo days, public enthusiasm reached a frenzy as we moved toward the first lunar landings, then plummeted. What the media see as the big event in exoplanetary science is the discovery of a terrestrial world around a star like the Sun. Let’s hope there is no similar letdown afterwards.

After all, we’re getting close, and discoveries like those announced yesterday remind us that Kepler can find very small worlds indeed. Kepler-37b lays claim to being the smallest planet yet found around a star similar to the Sun, similar in this case meaning a G-class star with a radius about three-quarter’s of the Sun’s. The new planet is just a bit larger than our Moon, as the image below shows. The world is assumed to be rocky and, with a 13-day orbit, its surface temperature is probably in the range of 700 K. 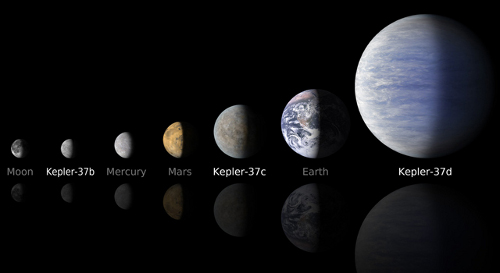 Image: NASA’s Kepler mission has discovered a new planetary system that is home to the smallest planet yet found around a star like our sun, approximately 210 light-years away in the constellation Lyra. The line-up above compares artist’s concepts of the planets in the Kepler-37 system to the moon and planets in the Solar System. The smallest planet, Kepler-37b, is slightly larger than our moon, measuring about one-third the size of Earth. Kepler-37c, the second planet, is slightly smaller than Venus, measuring almost three-quarters the size of Earth. Kepler-37d, the third planet, is twice the size of Earth. Credit: NASA/Ames/JPL-Caltech.

As you can see from the image, we have three new worlds all told, all of them orbiting at a distance less than Mercury’s distance to the Sun. Kepler-37c orbits the star every 21 days, while Kepler-37d, probably a Neptune-class world, orbits every 40 days. A fourth candidate, identified as KOI-245.04 in the most recent Kepler planet catalog, is now disregarded, thought to be the result of random noise, starspot activity on Kepler-37, or instrumental artifacts.

Variable starlight can confuse transit detections, particularly of tiny worlds like Kepler-37b. Fortunately, Kepler-37 is both bright and quiet, allowing the methods of asteroseismology to be brought into play. The oscillations caused by sound waves generated beneath the stellar surface appear as a flickering of the star’s brightness. These measurements are tricky to observe in smaller stars, but making them allows the team to calculate the radius of Kepler-37 to a three percent accuracy. That, in turn, gives us accurate readings of the planetary radii in the system.

All of this is good news, for it implies that Kepler will be able to find Earth-sized planets in longer orbits around Sun-like stars. Once we begin finding them, is the public going to get exoplanet fatigue just as it lost interest in the Moon after Apollo? Astronomer John Johnson (Caltech) takes note of the possibility in this article in the Los Angeles Times:

“I don’t think anyone would have been taken seriously if they had said, before Kepler launched, that we’d find planets as small as Mercury,” he said. Mercury is slightly larger than Earth’s moon.

The telescope has revolutionized astronomers’ notions of our galaxy as a place that must be “teeming with rocky planets” that seem to be “a natural outgrowth of star formation,” he added.

Indeed, Kepler has been so prolific that many space enthusiasts have become blasé about exoplanet discoveries just as scientists are closing in on finding truly Earth-like worlds, Johnson said.