Where is the best place to look for life? At first glance, a red dwarf would seem to be the ideal choice because a transiting terrestrial-class world in the habitable zone of a red dwarf is going to block a larger part of the star’s light than a similarly sized world orbiting a larger star. Red dwarfs pose their own problems for life, including the possibility of tidal lock and severe flares, but in terms of detectability, they seem made to order for planet hunters with transit methods in mind.

But white dwarfs turn out to be interesting targets in their own right, and in at least one significant way may offer even more advantages. So says a new paper by Avi Loeb (Harvard-Smithsonian Center for Astrophysics) and Don Maoz (Tel Aviv University), who point out that a habitable planet orbiting a white dwarf would have to be close to its star indeed, perhaps as close as 1.5 million kilometers. As with a red dwarf, a transit here will block a large fraction of the star’s light — astronomers speak of a large ‘transit depth’ — and should therefore be readily detectable.

But there is more to the story. Loeb and Maoz are interested in not just detecting such a world but studying its atmosphere. We’ve already been able to examine the atmosphere of the gas giant HD 209458 using Hubble data, so the method is known to work. Astronomers make spectroscopic observations of the unobstructed light of the star and compare these to measurements of the star during a planetary transit. It’s tricky work, and getting it down to the scale of smaller planets will require future instruments like the James Webb Space Telescope.

JWST, in fact, should be able to make atmospheric measurements down to planets of just a few Earth masses in the habitable zone of red dwarfs, but the paper points out how many hours of total exposure time will be necessary and how many conditions will need to be right for this to happen. But Loeb and Maoz argue that the signature of water vapor and perhaps oxygen will be detectable by the Webb instrument in just a few hours if found on a planet around a white dwarf. The researchers simulated a JWST observation of an Earth-like planet’s transit across such a star and found that the atmospheric ‘transmission signal’ is much more detectable than around any main-sequence stars, with oxygen in particular being a feasible catch for the JWST. 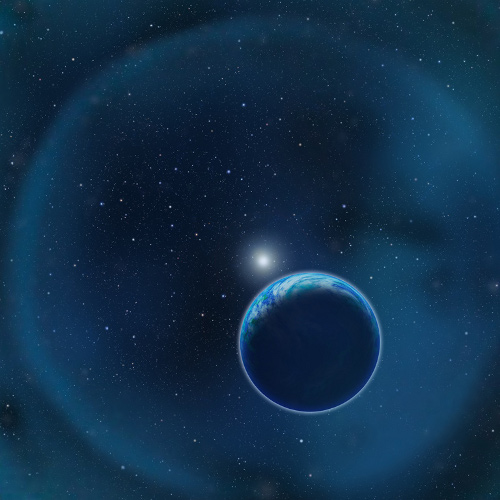 Image: A new study finds that we could detect oxygen in the atmosphere of a habitable planet orbiting a white dwarf (as shown in this artist’s illustration) much more easily than for an Earth-like planet orbiting a Sun-like star. Here the ghostly blue ring is a planetary nebula – hydrogen gas the star ejected as it evolved from a red giant to a white dwarf. Credit: David A. Aguilar (CfA).

But can planets form around white dwarfs, which are, after all, the remnants of red giants? Recent work has shown that stars like these can have long-lasting habitable zones, and studies of the photospheric metals in these stars have led to estimates that between 15 and 30 percent could host planets. A small planet within a few AU of its star would not survive the red giant phase, so we are talking about planets that migrated in from a much wider orbit after the white dwarf had formed. And even assuming such, we still have issues of water loss:

Barnes & Heller (2012) and Nordhaus & Spiegel (2012) have emphasized that the tidal heating of the planet, until it had achieved full circularization and synchronization, would lead to full loss of any water and volatiles present. We note, however, that the young Earth was also a hot and dry place, but volatiles and water were then delivered to it by a barrage of comets. The comet impact rate then decreased to its present low level, greatly lowering the biological damage of such impacts. It is not implausible that such post-formation volatile delivery also could take place on an earth-like planet in a WD’s habitable zone, perhaps driven by the same scattering process that drove the planet itself to migrate inward after the formation of the WD.

All this leaves us with the question of finding white dwarfs with transits to study. The authors call for sampling some 500 white dwarfs within approximately 40 parsecs, a study that should be feasible with the European Space Agency’s Gaia observatory, scheduled for launch later this year. These targets would then be monitored with small telescopes in search of transits. “Earth-mass planets in the habitable zones of WDs,” write the authors, “may oﬀer the best prospects for detecting bio-signatures within the coming decade.”

The paper is Loeb and Maoz, “Detecting bio-markers in habitable-zone earths transiting white dwarfs,” accepted for publication in Monthly Notices of the Royal Astronomical Society (preprint).