Existential risks, as discussed here yesterday, seem to be all around us, from the dangers of large impactors to technologies running out of control and super-volcanoes that can cripple our civilization. We humans tend to defer thinking on large-scale risks while tightly focusing on personal risk. Even the recent events near Chelyabinsk, while highlighting the potential danger of falling objects, also produced a lot of fatalistic commentary, on the lines of ‘if it’s going to happen, there’s nothing we can do about it.’ Some media outlets did better than others with this.

Risk to individuals is understandably more vivid. When Apollo 8 left Earth orbit for the Moon in 1968, the sense of danger was palpable. After all, these astronauts were leaving an orbital regime that we were beginning to understand and were, by the hour, widening the distance between themselves and our planet. But even Apollo 8 operated within a sequenced framework of events. Through Mercury to Gemini and Apollo, we were building technologies one step at a time that all led to a common goal. No one denied the dangers faced by every crew that eventually went to the Moon, but technologies were being tested and refined as the missions continued.

Inspiration Mars is proposing something that on balance feels different. As described in yesterday’s news conference (see Millionaire plans to send couple to Mars in 2018. Is that realistic? for more), the mission would be a flyby, using a free return trajectory rather than braking into Martian orbit. The trip would last 501 days and would be undertaken by a man and a woman, probably a middle-aged married couple. Jonathan Clark, formerly of NASA and now chief medical officer for Inspiration Mars, addresses the question of risk head-on: “The real issue here is understanding the risk in an informed capacity – the crew would understand that, the team supporting them would understand that.” Multi-millionaire Dennis Tito, a one-time space tourist who heads up Inspiration Mars, says the mission will launch in 2018. 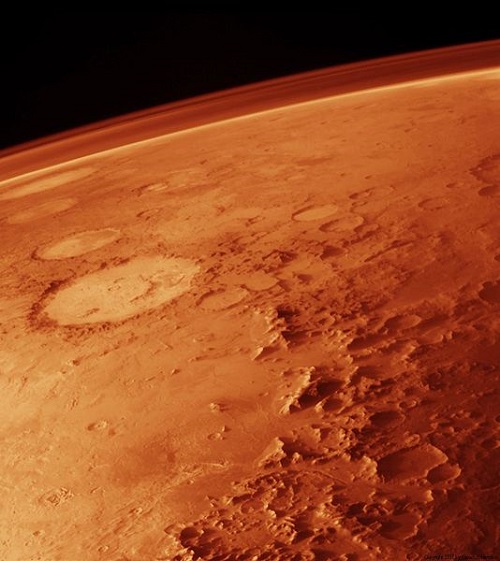 Image: A manned Mars flyby may just be doable. But is the 2018 date pushing us too hard? Image credit: NASA/JPL.

We’ll hear still more about all this when the results of a mission-feasibility study are presented next weekend at the 2013 IEEE Aerospace Conference in Montana. Given the questions raised by pushing a schedule this tightly, there will be much to consider. Do we have time to create a reliable spacecraft that can offer not only 600 cubic feet of living space but another 600 for cargo, presumably a SpaceX Dragon capsule mated to a Bigelow inflatable module? Are we ready to expose a crew to interplanetary radiation hazards without further experience with the needed shielding strategies? And what of the heat shield and its ability to protect the crew during high-speed re-entry at velocities in the range of 50,000 kilometers per hour?

For that matter, what about Falcon Heavy, the launch vehicle discussed in the feasibility analysis Inspiration Mars has produced for the conference? This is a rocket that has yet to fly.

No, this doesn’t feel much like Apollo 8. It really feels closer to the early days of aviation, when attention converged on crossing the Atlantic non-stop and pilots like Rene Fonck, Richard Byrd, Charles Nungesser and Charles Lindbergh queued up for the attempt. As with Inspiration Mars, these were privately funded attempts, in this case designed to win the Orteig Prize ($25,000), though for the pilots involved it was the accomplishment more than the paycheck that mattered. Given the problems of engine reliability at the time, it took a breakthrough technology — the Wright J-5C Whirlwind engine — to get Lindbergh and subsequent flights across.

Inspiration Mars is looking to sell media rights and sponsorships as part of the fund-raising package for the upcoming mission, which is already being heavily backed by Tito. I’m wondering if there is a breakthrough technology equivalent to the J-5C to help this mission along, because everything I read about it makes it appear suicidal. The 2018 date is forced by a favorable alignment between Mars and the Earth that will not recur until 2031, so the haste is understandable. The idea is just the kind of daring, improbable stunt that fires the imagination and forces sudden changes in perspective, and of course I wish it well. But count me a serious skeptic on the question of whether this mission will be ready to fly on the appointed date.

And if it’s not? I like the realism in the concluding remarks of the feasibility study:

Exactly so, and there would be much development in the interim. The study goes on:

Although the next opportunity after this mission wouldn’t be for about another 13 years, any subsequent manned Mars mission would benefit from the ECLSS [Environmental Control and Life Support System], TPS [Thermal Protection System], and other preparation done for this mission. In fact, often by developing technology early lessons are learned that can reduce overall program costs. Working on this mission will also be a means to train the skilled workforce needed for the future manned Mars missions.

These are all good reasons for proceeding, leaving the 2018 date as a high-risk, long-shot option. While Inspiration Mars talks to potential partners in the aerospace industry and moves ahead with an eye on adapting near-Earth technologies for the mission, a whiff of the old space race is in the air. “If we don’t fly in 2018, the next low-hanging fruit is in ’31. We’d better have our crew trained to recognize other flags,” Tito is saying. “They’re going to be out there.”

In 1968, faced with a deadline within the decade, NASA had to make a decision on risk that was monumental — Dennis Tito reminded us at the news conference that Apollo 8 came only a year after the first test launch of the Saturn 5. Can 2018 become as tangible a deadline as 1970 was for a nation obsessed with a Moon landing before that year? If so, the technologies just might be ready, and someone is going to have to make a white-knuckle decision about the lives of two astronauts. If Inspiration Mars can get us to that point, that decision won’t come easy, but whoever makes it may want to keep the words of Seneca in mind: “It is not because things are difficult that we dare not venture. It is because we dare not venture that they are difficult.”