Europa continues to fascinate us with the possibility of a global ocean some 100 kilometers deep, a vast body containing two to three times the volume of all the liquid water on Earth. The big question has always been how thick the icy crust over this ocean might be, and we’ve looked closely at Richard Greenberg’s analysis, which shows surface features he believes can only be explained by interactions between the surface and the water, making for a thin crust of ice. See Unmasking Europa: Of Ice and Controversy for more, and ponder the prospects of getting some kind of future probe through a thin ice layer to explore the potentially habitable domain below.

Possible interactions between the surface and the ice are considered in a new paper by Mike Brown (Caltech) and Kevin Hand (JPL), one that makes the case that there are two ways of thinking about Europa. One is to see the Jovian moon purely as an ice shell upon which the bombardment of electrons and ions have created a chemical cycle. The other is to see it as a geologically active world with an internal ocean that affects what happens on the surface.

Just how much, in other words, does the chemistry of the internal ocean affect what we see from our spacecraft and telescopes? Brown and Hand now believe they can identify a chemical exchange between the ocean and the surface that we can analyze to learn more about both.

Using data from the Keck instrument on Mauna Kea, the researchers have used adaptive optics and spectroscopy to go far beyond what the instruments on the Galileo probe were able to tell us about Europa’s surface. Turning up in their results is a magnesium sulfate salt called epsomite. Magnesium could not be found on the surface unless it came from the ocean below, meaning that ocean water does make it through onto the surface, while surface materials get into ocean water. Says Brown:

“We now have evidence that Europa’s ocean is not isolated—that the ocean and the surface talk to each other and exchange chemicals. That means that energy might be going into the ocean, which is important in terms of the possibilities for life there. It also means that if you’d like to know what’s in the ocean, you can just go to the surface and scrape some off.” 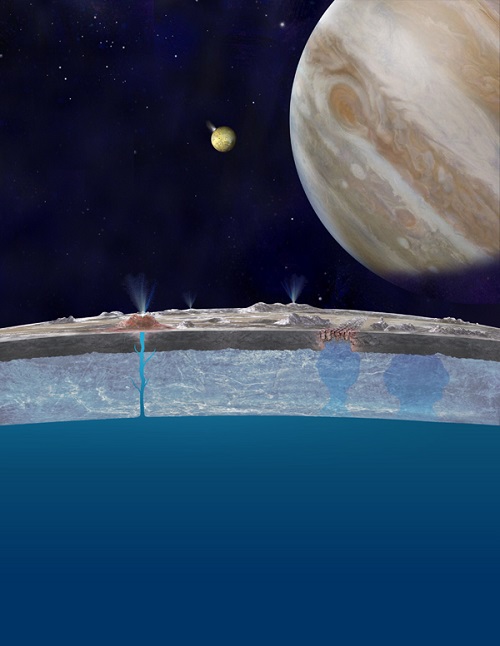 Image: Based on new evidence from Jupiter’s moon Europa, astronomers hypothesize that chloride salts bubble up from the icy moon’s global liquid ocean and reach the frozen surface where they are bombarded with sulfur from volcanoes on Jupiter’s innermost large moon, Io. The new findings propose answers to questions that have been debated since the days of NASA’s Voyager and Galileo missions. This illustration of Europa (foreground), Jupiter (right) and Io (middle) is an artist’s concept. Credit: NASA/JPL.

Because Europa is tidally locked to Jupiter, the same hemisphere always leads in its orbit around the planet, while the other always trails. The difference between the two is striking: While the leading hemisphere has a yellow tint, the trailing hemisphere is streaked with a red material that has been under study for many years. It is believed that volcanic sulfur from Io accumulates on Europa’s trailing hemisphere, existing there along with a substance other than water ice that Galileo could not identify. Keck’s OH-Suppressing Infrared Integral Field Spectrograph (OSIRIS) turned out to be what was needed to map the distribution of water ice and home in on the other material.

Europa’s ocean can be rich in sulfate or rich in chlorine, but Brown and Hand rule out a sulfate-rich ocean because magnesium sulfate only appears on the trailing hemisphere. This fits with other work Brown has done on Europa’s atmosphere, which identified atomic sodium and potassium as constituents. The researchers believe that sodium and potassium chlorides consistent with this atmosphere are the dominant salts on the surface of Europa. Their conclusion is that Europa’s is a chlorine-rich ocean with sodium and potassium present as chlorides. By this analysis it closely resembles Earth’s oceans. “If you could go swim down in the ocean of Europa and taste it, it would just taste like normal old salt,” Brown adds.

The paper is Brown and Hand, “Salts and radiation products on the surface of Europa,” in press at the Astrophysical Journal (preprint). More in this Keck Observatory news release.