Toward a Space-Based Civilization

The assumptions we bring to interstellar flight shape the futures we can imagine. It’s useful, then, to question those assumptions at every turn, particularly the one that says the reason we will go to the stars is to find other planets like the Earth. The thought is natural enough, and it’s built into the exoplanet enterprise, for the one thing we get excited about more than any other is the prospect of finding small, rocky worlds at about Earth’s distance from a Sun-like star. This is what Kepler is all about. From an astrobiological perspective, this focus makes sense, as we want to know whether there is other life — particularly intelligent life — in the universe.

But interstellar expansion may not involve terrestrial-class worlds at all, though they would still remain the subject of intense study. Let’s assume for a moment that a future human civilization expands to the stars in worldships that take hundreds or even thousands of years to reach their destination. The occupants of these enormous vessels might travel in a tightly packed urban environment or perhaps in a much more ‘rural’ setting with Earth-like amenities. Many of them would live out their lives in transit, without the ability to be there at journey’s end. We can only speculate what kind of social structures might emerge around the ultimate mission imperative.

Moving Beyond a Planetary Surface

Humans who have grown up in a place that has effectively become their world are going to find its norms prevail, and the idea of living on a planetary surface may hold little interest. Isaac Asimov once wrote about what he called ‘planetary chauvinism,’ which falls back on something Eric M. Jones wrote back in the 1980s. Jones believed that people traveling to another star will be far more intent on mining asteroids and the moons of planets to help them build new habitats for their own expanding population. Stephen Ashworth, a familiar figure on Centauri Dreams, writes about what he calls ‘astro-civilizations,’ space-based cultures that focus on the material and energy resources of whatever system they are in rather than planets. 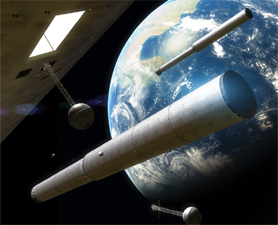 Ashworth’s twin essays appear in a 2012 issue of the Journal of the British Interplanetary Society (citation below) that grew out of a worldship symposium held in 2011 at BIS headquarters in London. The entire issue is a wonderful contribution to the growing body of research on worldships and their uses. Ashworth points out that a planetary civilization like our own thinks in terms of planetary resources and, when looking toward interstellar options, naturally assumes the primary goal will be to locate new ‘Earths.’ A corollary is the assumption of rapid transport that mirrors the kind of missions used to explore our own Solar System.

Image: A worldship kilometers in length as envisioned by space artist Adrian Mann.

An astro-civilization is built on different premises, and evolves naturally enough from the space efforts of its forebears. Let me quote Ashworth on this:

“A space-based or astro-civilisation…is based on technologies which are an extension of those required on planetary surfaces, most importantly the design of structures which provide artificial gravity by rotation, and the ability to mine and process raw materials in microgravity conditions. In fact a hierarchical progression of technology development can be traced, in which each new departure depends upon all the previous ones, which leads ultimately to an astro-civilisation.

The technology development Ashworth is talking about is a natural extension of planetary methods, moving through agriculture and industrialization into a focus on the recovery of materials that have not been concentrated on a planetary surface, and on human adaptation not only to lower levels of gravity but to life in pressurized structures beginning with outposts on the Moon, Mars and out into the system. Assume sufficient expertise with microgravity environments — and this will come in due course — and the human reliance upon 1 g, and for that matter upon planetary surfaces, begins to diminish. Power sources move away from fossil fuels and gravitate toward nuclear and solar power sources usable anywhere in the galaxy.

Agriculture likewise moves from industrialized methods on planetary surfaces to hydroponic agriculture in artificial environments. Ashworth sees this as a progression taking our adaptable species from the African Savannah to the land surface of the entire Earth and on to the planets, from which we begin, as we master the wide range of new habitats becoming available, to adapt to living in space itself. He sees a continuation in the increase of population densities that took us from nomadic life to villages to cities, finally being extended into a fully urbanized existence that will flourish inside large space colonies and, eventually, worldships.

An interstellar worldship is, after all, a simple extension from a colony world that remains in orbit around our own star. That colony world, within which people can sustain their lives over generations, is itself an outgrowth of earlier technologies like the Space Station, where residence is temporary but within which new skills for adapting to space are gradually learned. Where I might disagree with Ashworth is on a point he himself raises, that the kind of habitats Gerard O’Neill envisioned didn’t assume high population densities at all, but rather an abundance of energy and resources that would make life far more comfortable than on a planet.

Tomorrow I’ll want to take a look at O’Neill’s thoughts on how human society might conduct itself in space, and then return to Ashworth’s ideas on a natural progression to worldships. For now, though, let me give you the reference on Ashworth’s paper. It’s “The Emergence of the Worldship (I): The Shift from Planet-Based to Space-Based Civilisation,” in JBIS 65, No. 4-5 (2012), pp. 140-154. As you can see, the paper puts worldships in the far broader context of humanity’s future in space as we tap new sources of energy and materials. See Astronautical Evolution for more of Ashworth’s extensive contributions to the field.