Space Habitats and Nearby Resources

If humans go out into the Solar System and beyond drawing on the resources they find along the way, they don’t necessarily have to do it on worldships of the kind we talked about yesterday. But it’s a reasonable assumption that creating large space habitats would make engineering projects in deep space easier to implement, housing workers and providing a base for operations. Ken Roy presented ideas about habitats in the Kuiper Belt at Huntsville, including the possibility of a large colony being created inside objects like Pluto. If we choose to go that route, we’ll have the kind of space expertise to create artificial objects similar to worldships to help ourselves along.

Of course, we hardly need to limit ourselves to the Kuiper Belt for this kind of thinking. Whatever the design of the ships we use, we can also consider expansion into the vast cometary resources of the Oort Cloud and any other objects that may lurk there, including so-called rogue planets. For years we’ve kicked around the idea of a possible brown dwarf closer than Proxima Centauri, and it seemed the WISE mission was putting the idea to rest. But maybe not. Yesterday we got word of the closest star system found in a century, a brown dwarf binary 6.5 light years out. 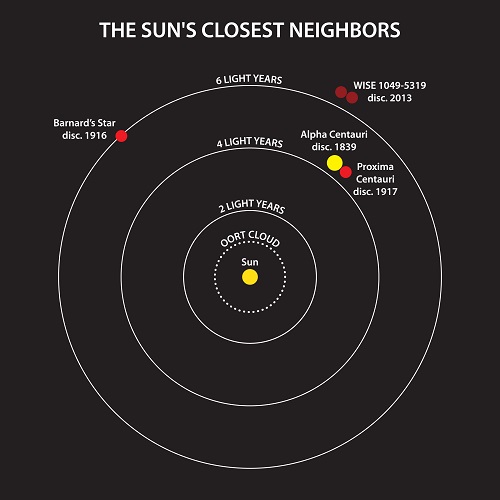 Image: This diagram illustrates the locations of the star systems that are closest to the Sun. The year when each star was discovered to be a neighbor of the Sun is indicated. The binary system WISE J104915.57-531906 is the third nearest system to the Sun, and the closest one found in a century. Credit: Janella Williams, Penn State University.

The Closest Brown Dwarfs Yet

You have to go back to 1916 to find another discovery this close, and that was Barnard’s Star — E. E. Barnard was not the actual discoverer of the star, but he was the first to measure its proper motion, thus pegging it as a near neighbor. Proxima Centauri was itself discovered just the year before by Robert Innes at Union Observatory in Johannesburg. The new system, WISE J104915.57-531906, reminds us that brown dwarfs may become a potential source of raw materials that facilitates outward expansion. We also know that some brown dwarfs have planetary systems while others have disks that may indicate planet formation has begun.

The new brown dwarf binary comes from WISE data and leads to the speculation that there are other interesting small systems yet to be discovered within 10 light years or so of Earth. The discoverer, Kevin Luhman (Penn State) spotted the signs of rapid motion in the WISE images and then looked for the object in older sky surveys, finding it in the Digitized Sky Survey as well as the Two Micron All-Sky Survey and the Deep Near Infrared Survey. All of this led the astronomer to work out the distance of the binary by parallax, with follow-up from the Gemini South telescope.

This exciting new find gives us a sense of how much we may yet discover. Says Luhman: “There are billions of infrared points of light across the sky, and the mystery is which one — if any of them — could be a star that is very close to our solar system.”

We are a long way from operating so far from Earth, but the presence of resources between the stars may re-shape our expectations about small, fast expeditions, and lead to the slower, staged approach implicit in worldships. But whether it leads to this outcome or not, Stephen Ashworth makes a case in his recent JBIS paper for exploiting resources here in our own system that could lead to what he calls an ‘astro-civilization,’ in which the construction of large space habitats and the ability to mine the needed resources leads inevitably to a culture more at home in space than on a planet.

John Lewis considered the potential of asteroid mining some time ago in Mining the Sky, a book now on the must-read list for admirers of the asteroid mining operations like Planetary Resources and Deep Space Industries that are now emerging. Lewis believed that freely orbiting space colonies built from raw materials extracted from the asteroids would allow for huge increases in the human population. He suggested an increase by a factor of 106, though Ashworth, working the numbers anew, comes up with a more conservative figure of 2 X 1015 humans, which works out to a factor of 286,000 over the current planetary population.

Whichever figure we go with, we are talking about vast increases in living space for our species. Note, too, that both Lewis and Ashworth are talking about a population model that applies to artificial habitats constructed in the inner Solar System, meaning out to and including the main belt asteroids. Neither writer is including the moons and Trojans of the gas giants, nor the abundant resources of the Kuiper Belt and the Oort Cloud, and of course neither works into his calculations the possibility of rogue planets without stars or potentially nearby brown dwarfs.

But a space-based civilization living in the inner Solar System could be the staging area for further expansion. Ashworth thinks the extensive development of the main belt asteroids and exploitation of resources closer in would produce an energy economy throughout the Solar System in the region of 2.5 X 106 zeta joules (ZJ) per year. A zeta joule is 1021 joules, the joule being a standard unit of energy equal to 0.2389 calories.

Ashworth’s figures show that a program consuming 1 percent of the Solar System GDP annually over a ten year period would demand 2.5 X 105 ZJ. At this level of energy production, the construction of a worldship designed for 107 passengers is 28 percent of the amount, meaning that a space-based civilization at this level would find it within its means to build such a vehicle.

Any culture building vast artificial structures in space is one capable of a long-term interstellar crossing, but it is clear that a worldship is not an object that can be completed and then left alone to function. Indeed, the humans aboard the vessel will be spending a great deal of time maintaining and improving their world. From Ashworth’s paper:

These trends involve an increasing reliance upon engineered control systems in order to maintain the correct temperatures, air composition, water purity, food supply, and biological and microbiological health. Space colonies are to be understood, not as small artificial self-regulating planets, but as large self-contained buildings requiring continual maintenance. An astro-civilisation must be constantly active in order to survive: repairing space colonies, scrapping superannuated ones, recycling their materials and constructing new ones, just as an urban civilisation on Earth today is constantly renewing its built infrastructure, or as the human body is constantly renewing the cells of which it is composed.

There too is the sense of purpose which some have speculated might be lost by the numerous generations on their way to another star. For constantly improving and upgrading conditions aboard a space habitat offers a challenge upon which the survival of all aboard depend. Learning to live off the resources that proliferate throughout the outer system and beyond — and the Oort Cloud may extend out a light year or more — the worldship inhabitants will be interested in where their next resource collection will be. Habitable planets in a destination star system will be of fascinating astrobiological interest, but asteroids and small moons may be where the action is.

I haven’t yet gotten to the reflections on Gerard O’Neill and the internal conditions on a worldship that I promised yesterday, but time draws short this morning. More on all this tomorrow. Repeating the Ashworth citation, it’s “The Emergence of the Worldship (I): The Shift from Planet-Based to Space-Based Civilisation,” in JBIS 65, No. 4-5 (2012), pp. 140-154. You might also want to check out the JBIS website, which is being revised and updated.