Whether we’re planning to go to the stars on a worldship or with faster transportation, the choice of targets is still evolving, and will be for some time. Indeed, events are moving almost faster than I can keep up with them. It was in early February that Courtney Dressing and David Charbonneau (Harvard-Smithsonian Center for Astrophysics) presented results of their study of 3897 dwarf stars with temperatures cooler than 4000 K, revising their temperatures downward and reducing their size by 31 percent. The scientists culled the stars from the Kepler catalog, and their revisions had the effect of lowering the size of the 95 detected planets in their data.

They went on to deduce that about 15 percent of all red dwarf stars have an Earth-sized planet in the habitable zone. [PG note: The 15% figure is a revised estimate that I’ve just learned about from Ravi kumar Kopparapu. Dressing and Charbonneau call attention to this change at the end of their paper. See citation below].

That would make the nearest Earth-like planet in the habitable zone about 13 light years away (I’m still holding out for the much closer Proxima Centauri when it comes to M-dwarfs). But Ravi kumar Kopparapu (Penn State) has revisited Dressing and Charbonneau’s work because of a key fact: The latter used habitable zone limits based on a 1993 study by James Kasting which Kopparapu believes are not valid for stars with effective temperatures less than 3700 K. The scientist was in the news almost as recently as Dressing and Charbonneau with his study of habitable zones around main sequence stars, where he presented an improved climate model developed with Kasting and other colleagues that allowed him to move the habitable zone boundaries out a bit further from their stars than they had been before (see Habitable Zones: A Moving Target for more).

Rory Barnes (University of Washington) called the work of Kopparapu and colleagues ‘the new gold standard for the habitable zone,’ and in a paper just accepted by Astrophysical Journal Letters, Kopparapu now uses his habitable zone revisions to estimate the rate of occurrence of terrestrial-sized planets in the habitable zone of M-dwarfs. His new paper was based on the Harvard team’s data and used the same calculation method. But with the new habitable zone parameters worked in, the number of habitable planets is greater than previously thought. Four out of ten of the nearest small stars should have potentially habitable planets. 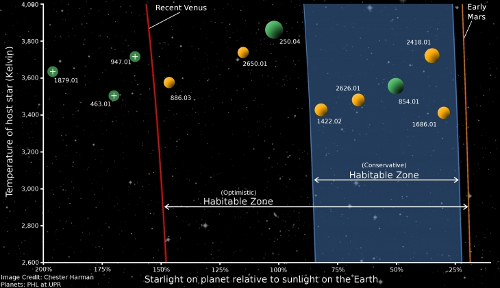 Kopparapu’s new work would place the average distance to the nearest habitable planet at around 7 light years. Given that there are eight stars within 10 light years of the Sun that fit this model, we could expect to find perhaps three Earth-sized planets in the habitable zones there.

M-dwarfs are becoming increasingly important in the search for terrestrial-class worlds. Because their orbits are close to the parent star, habitable worlds in such systems would transit often and produce a stronger transit signal than a similar planet around a G-class star like the Sun. That makes M-dwarfs good Kepler targets and also suggests that future space-based missions may find this class of star an extremely useful target. Given that M-dwarfs may comprise as much as 80 percent of all stars in the galaxy, it could turn out that most life-bearing planets orbit small red stars, assuming life can indeed develop around them.

The paper is Kopparapu, “A revised estimate of the occurrence rate of terrestrial planets in the habitable zones around kepler m-dwarfs,” accepted at Astrophysical Journal Letters (preprint). The Dressing and Charbonneau paper is “The Occurrence Rate of Small Planets Around Small Stars,” to be published in The Astrophysical Journal (draft version online).