The Vision of Arthur C. Clarke

In a 1955 letter to the British rocket scientist Val Cleaver, Arthur Clarke wrote about his view from the island then called Ceylon:

“Beautiful night last night. Southern Cross (a very feeble constellation) just above the front gate, with Alpha Centauri beside it. It always gives me an odd feeling to look at Alpha and to realize that’s the next stop.”

The next stop indeed. Cleaver was a fellow member of the British Interplanetary Society who, like Clarke, was instrumental in energizing the society after World War II. Both men served the BIS as its chairman in those years, and after Cleaver’s wartime work at De Havilland, he would go on to start a rocket division for the company and become chief engineer for the rocket division of Rolls-Royce. He is perhaps best known as the man behind the Blue Streak missile, but for those with a passion for the works of Arthur C. Clarke, he will always be remembered for his deep friendship with the man, and his energetic contribution to British thinking on space travel. 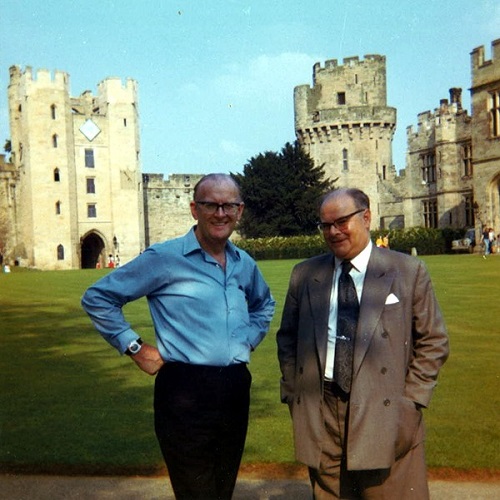 Neil McAleer’s new book on Clarke is called Visionary: The Odyssey of Sir Arthur C. Clarke (Clarke Project, 2012). It’s the place to go for the background on this period, and on any period, in Clarke’s life. I call the book ‘new,’ but it’s actually a major revision and update of McAleer’s 1993 biography that adds extensive coverage of Clarke’s last fifteen years, covering a lot of material that was new to me, including insights into Clarke’s synergistic relationship with Stanley Kubrick, his reaction to the tsunami of 2004, and the almost playful way he fielded questions about his private life until a newspaper scandal based on nothing more than innuendo delayed the ceremony conferring his knighthood for two years. Throughout, McAleer’s research is exhaustive, drawing on memoirs, interviews and letters from Clarke’s many friends.

I have no hesitation in pointing you to this book if, like me, you were influenced by Clarke in your thinking about the human future in space. McAleer, an accomplished author of both fiction and non-fiction about spaceflight, met Clarke for the first time in the summer of 1988, when the latter had just been released from Johns Hopkins after a period of medical tests. The 70-year old Clarke, by then renowned for his science fiction but equally for his contributions to spaceflight including the development of the communications satellite, had been diagnosed several years earlier with amyotropic lateral sclerois (ALS), a terminal illness also known as Lou Gehrig’s Disease.

Because the doctors found the diagnosis had been mistaken, we can assume that McAleer met Clarke at a propitious time, and he proved more than willing to let the younger writer begin a biography, armed with a contact list of 200 names that Clarke gave him. The final, revised biography is now available in several editions ranging from a beautifully crafted signed and numbered hardback, a limited edition paperback, and a soon to be available e-book edition from Rosetta Books. I think Clarke would appreciate the transition to electronic books and would find the idea of reading his work on a Kindle as natural as doing telecommunications from Sri Lanka.

Back in 2007 I published Gregory Benford’s two-part travelogue about his journey to Asia, part of which involved flying to Sri Lanka, Clarke’s adopted home, from which Clarke routinely addressed audiences throughout the world as he continued to battle post-polio syndrome. The visit would have occurred a scant year before Clarke’s death. Here is how Benford described him:

Arthur has post polio syndrome and thus very little memory or energy. He turns 90 this December and wants to keep in touch with the outer world, mostly through the Internet. He has few friends left in Colombo. He took us to the Colombo Swimming Club for lunch, a sunny ocean spot left over from the Raj. It felt somehow right to watch the Indian Ocean curl in, foaming on the rocks, to the tune of gin and tonics — and to speak of space, that last, greatest ocean. Science fiction is to technology as romance novels are to marriage: a sales pitch. But without vision and then persuasion, little would ever happen. Arthur has always known that. 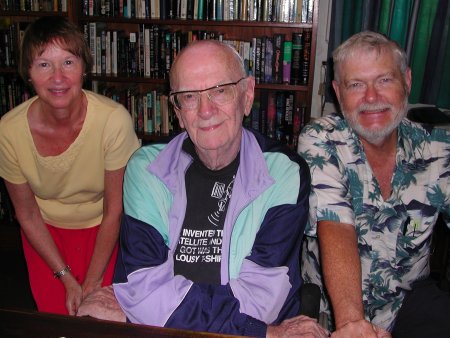 Vision and then persuasion — how better to describe how Arthur Clarke operated throughout a lifetime that lasted longer, as McAleer points out, than it takes Halley’s Comet to orbit the Sun? His outlook was always positive and framed in knowledge of humanity’s possibilities when enriched with technology. But he was also believer in the deep context of time and that takes me back to McAleer’s hardcover edition for a moment. Like Clarke, McAleer is a believer in long-term thinking and the symbolic acts that link us with the generations that follow us. Thus he designed the hardcover edition to last, as noted in the comments at the beginning of the book:

The challenge was to create a physical book that might survive perhaps half a millennium. With that goal in mind, the biographer researched the use of preservation-quality materials in its production—paper, ink, binding, casing, Smyth-sewn signatures and silver die stamps evoking the stars… The author intends—although he may not be able to guarantee!—that this edition’s pages will last 500 years, even outside environmentally controlled rare-archive repositories. As such, it’s hoped that this artifact will carry the artistry of Gutenberg into a future when new physical books may be far fewer.

What better tribute to a man who, in Jo Walton’s memorable phrase, wrote so eloquently about ‘the poetry of deep time’? The book that exemplified that poetry was The City and the Stars, a work that elicits so many reactions in me that I want to discuss it with reference to McAleer’s book at greater length than I have time for today. The frustration of trying to write about a man whose contributions infused both the science and literature of his time is that he was almost too big for the page to hold him. I’m going to need several days with Clarke and McAleer, continuing tomorrow with the tale first known as Against the Fall of Night.

Next post: Arthur C. Clarke: On Cities and Stars