In the 1950s, Arthur C. Clarke’s fame had begun to spread, and he sometimes referred to himself, genially enough, as an ‘unemployed prophet.’ This is a period in Clarke’s career that, from 1953 to 1956, saw the emergence of the fifteen tall tales that would be published in 1957 as Tales from the White Hart, a fictitious pub modeled after London’s White Horse. But while the stories were extravagant, the setting was the perfect amalgam of Clarke’s interest, for the White Horse was where science fiction met rocketry for his extensive network of friends.

One habitué of the White Horse was Ken Slater, whose recollection of those meetings appears in Neil McAleer’s Visionary: The Odyssey of Sir Arthur C. Clarke (2013):

“Anybody new that came to the pub was always told to ask Arthur to tell them about rockets, you see. Which they would do and then sit back for the short lecture. After Arthur broke into the short lecture, then we’d always strongly advise the newcomer to ask, ‘Look, what does the rocket push against?’ Which immediately brought forth from Arthur the long lecture, you know, the five-guinea version. That was a standard put-on at the White Horse, because if you ever got Arthur on rocketry, you could sit back and let the bar listen for up to a couple of hours.” 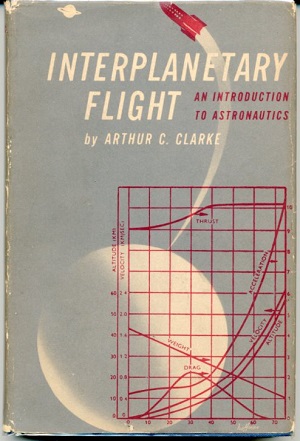 By now Clarke was well established in science fiction, with credits like The Sands of Mars (1951) and Childhood’s End (1953), along with short story collections like 1953’s Expedition to Earth. But as McAleer notes, it was science writing rather than science fiction that had made him realize it was time to become a full-time writer. The spur was a contract with Temple Press in 1949 for a nonfiction book called Interplanetary Flight, which drew heavily on a two-part paper he had published in separate magazines in previous years. The book presented spaceflight for the general reader, though the more technical minded could find Clarke’s equations tucked neatly away in the appendix.

Now emerges Clarke the educator, a rocket scientist with a bent for philosophy who saw the exploration of space as both a physical and a spiritual quest. Carl Sagan would call Interplanetary Flight ‘a turning point in my scientific development,’ and technology in service of the human spirit became Clarke’s idée fixe, the principle that would hold humanity together by offering it challenges that summoned up all its reserves of intellect and courage. Soon Clarke’s American editor George Jones would encourage him to write 1952’s The Exploration of Space, which was bought by the Book of the Month Club.

Clifton Fadiman, for years one of the BOMC’s judges, met Clarke on the first of the author’s trips to the United States. McAleer quotes him on a meeting at the Plaza Hotel:

“The Oak Room is a rather worldly rendezvous. Mr. Clarke is not worldly; he is otherworldly. He spoke of space satellites, lunar voyages, interplanetary cruises, as other men would discuss the market or the weather. As he explained how within a decade three space stations whirling in an orbit about the equator will make possible (indeed one fears inevitable) simultaneous world-wide television broadcasting, our right-hand neighbor (a vice-president of CBS) went into a kind of catalepsy.

“To understand a mind like Mr. Clarke’s we must realize that during the last fifty years, more especially the last twenty-five years, virtually a new mental species has emerged among us. They are the men who in a real sense live in the future, men for whom the present is merely a convenient springboard.”

If you’ll go back to the first of these articles on Clarke (The Vision of Arthur C. Clarke), you’ll see in the second photo there that Clarke is wearing under his jacket a T-shirt that Gregory Benford gave him. The text is barely readable, but if you look closely, you’ll see that it says “I invented the communications satellite, and all I got for it was this lousy T-shirt.” Fadiman remembers Clarke’s enthusiasm for the idea in 1952, but it would indeed make him little money.

As his stint in the Royal Air Force drew to a close in 1945, Clarke developed the notion of geostationary satellites providing global communications. During the war he had worked on microwaves and radar, while his passion for rocketry provided the means of deployment. McAleer points to George O. Smith as a possible influence, the latter having published a series of stories in Astounding during the war years that became known as the Venus Equilateral series. Clarke even wrote an introduction to a 1976 reprint of these stories saying that they might well have influenced him subconsciously in his work.

The article “Extra-Terrestrial Relays,” whatever its sources, would appear in Wireless World in October of 1945. Worldwide coverage by radio and television would be implemented by a series of spacecraft with an orbital period of 24 hours at a distance of 42,000 kilometers from Earth center. Clarke went on to describe the equatorial orbits that would place space stations into ‘fixed’ spots in the sky (as seen by people on Earth). The predictions were bold, valid and, yes, visionary, but remained unheralded at the time except by the US Navy. Many believe the article was influential in the development of early space satellites.

Clarke’s $40 from Wireless World offered him plenty of opportunity later in life to joke about the real monetary value of the communications satellite concept, and McAleer notes that he never showed any regrets about what might have been. In any case, being a visionary was already becoming a habit for the writer, one that seemed to outweigh financial considerations. While still in the RAF and working as an instructor at a radio school in Wiltshire, Clarke often broke into soliloquies on rocket science, describing at one late night session how multistage rockets would get us to the Moon. When asked how big the rocket would be, he described it as the height of St. Paul’s Cathedral, which turns out to be within a few feet of the height of the Saturn V. 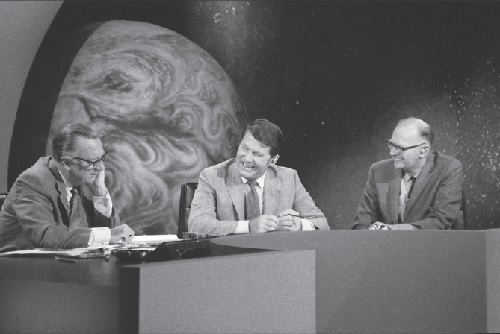 The Pleasures of Re-Reading

The twin themes of Clarke’s life — the future as depicted in science fiction and the technology that would get us there — were fully in place by 1950. For the rest, for Sri Lanka and 2001 and the space elevator, for the increasing fascination with the ocean and diving expeditions among the Pacific coral, for the Apollo coverage with Cronkite and the extraterrestrial interloper called Rama, I send you to McAleer’s book. But I also send you emphatically back to Clarke himself. I’d begin a re-read of the man with his short stories, probably starting with Expedition to Earth and moving then to Childhood’s End. I’d look anew at The City and the Stars and them make a point of picking up The Songs of Distant Earth, a few thoughts on which will close this piece.

The Songs of Distant Earth came out of Clarke’s speculations on using an interstellar rather than an interplanetary setting, and the genesis of the book was a short story written in 1957, the year of Sputnik. Thirty years later he would begin the novel of the same name, one he would always consider his best work. Clarke took his crew to a planet 50 light years away, traveling in hibernation at ten percent of the speed of light. Judy-Lynn del Rey would publish the book in 1987, a hard science fiction tale that at its kernel contained a love story. McAleer says this:

Thematically, as in much of Clarke’s fiction, the novel addressed humanity’s quest for purpose and immortality in contrast to the individual’s inevitable death. The loneliness of man is intensified against the backdrop of cosmic space and the finiteness of human time. Even if the survival of Homo sapiens is assured through interstellar travel, are not individuals doomed even as they embrace in love and light to keep the fall of night at bay? Clarke’s “songs” are not as joyous and uplifting as we might first expect. Always present in the novel is the feeling of insurmountable separation across the voids of space, time, and death.

Clarke tried to pull out all the stops here — he was sensitive to the charge of flat characterization and wanted to counter it, and The Songs of Distant Earth demonstrates he had it in his power to do that, though reading the book I can sense how hard the effort must have been. For Clarke’s characters are, for the most part, drawn to serve a plot purpose, and in the bulk of his fiction, we see character used the way the writer and critic James Gunn thinks it should be used in science fiction, as a way of creating a representative humanity in which the important work — the ideas of the tale — can be made manifest by the character’s reaction to them. 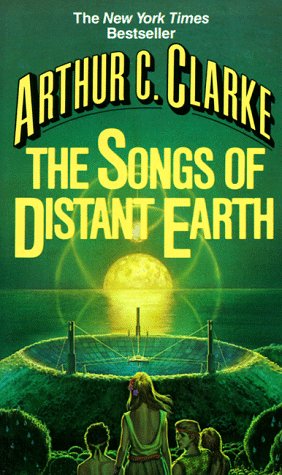 That can still make for powerful fiction, but you can see from the characters in The City and the Stars that their very flatness of affect is the result of their situation, living a changeless life in the eternal city. Or think of Keir Dullea and Gary Lockwood in 2001: A Space Odyssey, where the difference between humans and their technology is not always apparent, the crew of Discovery sometimes seeming as robotic as Hal himself.

None of this matters when, as did Stapledon, Clarke takes our imagination into the deep future and rotates our view back around to see what our world looks like from that perspective. He was dismissive of the idea that science fiction is nothing but escapism, telling Alice Turner:

“It’s hard to define science fiction these days, especially since the mainstream seems to be moving in that direction. Traditionally, it’s been a form that offered a good story, and I suppose you could call that escapism, in a positive sense. C.S. Lewis, who wrote it himself, said, ‘The only people who think there’s something wrong with escapism are jailers.’”

But I also like what he told Alan Watts: “The purpose of the universe, Alan, is the perpetual astonishment of mankind.” Clarke was a writer who thought not in terms of years but of aeons, and not so much of individual humans as of the species. Re-reading Clarke, then, should also take us to his collected non-fiction, the hefty volume called Greetings! Carbon-Based Bipeds (1999). Here the twin strands of Clarke’s work come together, a lifetime of enthusiasm for and optimism about technology and the deep spaces to which it can take us all.