The news that NASA has approved the TESS mission kept my mood elevated all weekend. TESS (Transiting Exoplanet Survey Satellite) has been the logical NASA follow-up to Kepler ever since the Space Interferometry Mission was canceled in 2010. The point is that Kepler looks at a field of stars with the goal of developing a statistical analysis, helping us (ultimately) to home in on the value for ηEarth (Eta_Earth), the fraction of stars orbited by planets like the Earth.

To do this, Kepler is looking out along the Orion Arm of the galaxy, with almost all the stars in its field of view between 600 and 3000 light years away. In fact, fewer than one percent of Kepler’s 156,000 stars are closer than 600 light years. There are plenty of stars beyond 3000 light years, but as we push beyond this distance, the stars become too faint for Kepler’s transit methods to be effective. The carefully chosen field in Cygnus and Lyra is ideal for Kepler’s statistical data but the next question to ask is how many Earth-like planets are to be found around relatively nearby stars. 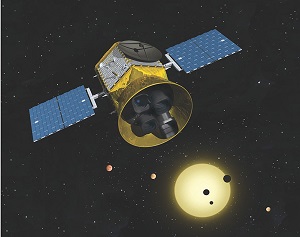 TESS is led by principal investigator George Ricker (MIT Kavli Institute for Astrophysics and Space Research), whose team will be working with an array of wide-field cameras to perform an all-sky survey, as opposed to the intense ‘stare’ Kepler makes at a particular starfield. Ricker says the mission should be able to identify thousands of new planets in the solar neighborhood in a survey that will cover 400 times as much sky as any previous exoplanet mission.

We all have ideal missions we’d like to see fly, from the Space Interferometry Mission to some sort of grandly designed Terrestrial Planet Finder, but among the realistic options in front of us, TESS makes abundant sense. It will home in on small rocky planets and help us measure their mass, density, size and orbit, along with offering up data on their atmospheres. And you can also think of TESS as something of a pointer scope for the James Webb Space Telescope and other future instruments that will begin the hunt for astrobiological signatures on other worlds.

“The TESS legacy,” says Ricker, “will be a catalog of the nearest and brightest main-sequence stars hosting transiting exoplanets, which will forever be the most favorable targets for detailed investigations.” That makes the $200 million funding for this bird money well spent. In an interview on the Kavli Foundation site, Ricker adds that the interactions of multiple planets as they orbit their host star, spotted through transit timing variations, can aid the search:

In other words, we’ll have TESS spotting planets around stars bright enough for ground-based telescopes to home in on these transit time variations (TTV), something we can’t readily do with most of the Kepler planets because their stars are too faint. The system is designed to detect changes in the intensity of a star’s light down to 40 parts per million. By comparison, Earth viewed from outside the Solar System would cause a transit drop of about 85 parts per million. Ricker estimates that TESS will be able to detect as many as 2700 planets, including several hundred Earth-size worlds. The TESS mission is now scheduled for launch in 2017.