The Chemistry of Europa’s Ocean

The news that hydrogen peroxide is found across much of the surface of Europa is intriguing. The global ocean beneath the moon’s icy crust would turn hydrogen peroxide into oxygen, assuming there is some mixing between the surface and the ocean. We don’t know if that mixing occurs, but if it does, then we may be looking at a useful chemical energy source for life. Given that I spent much of last week writing about Arthur C. Clarke, this thought invariably brings up a recent viewing of 2010: Odyssey II and the injunction beamed to Earth: “All these worlds are yours except Europa. Attempt no landing there.”

Europa is increasingly irresistible the more we learn about it. Here’s Kevin Hand (Jet Propulsion Laboratory) on the question of hydrogen peroxide’s possible role:

“Life as we know it needs liquid water, elements like carbon, nitrogen, phosphorus and sulfur, and it needs some form of chemical or light energy to get the business of life done. Europa has the liquid water and elements, and we think that compounds like peroxide might be an important part of the energy requirement. The availability of oxidants like peroxide on Earth was a critical part of the rise of complex, multicellular life.” 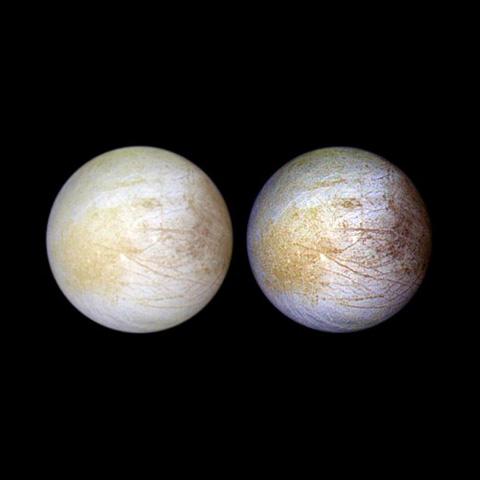 Image: This color composite view combines violet, green, and infrared images of Jupiter’s intriguing moon, Europa, for a view of the moon in natural color (left) and in enhanced color designed to bring out subtle color differences in the surface (right). The bright white and bluish part of Europa’s surface is composed mostly of water ice, with very few non-ice materials. In contrast, the brownish mottled regions on the right side of the image may be covered by hydrated salts and an unknown red component. The yellowish mottled terrain on the left side of the image is caused by some other unknown component. Long, dark lines are fractures in the crust, some of which are more than 3,000 kilometers (1,850 miles) long. Credit: JPL.

Hand and Caltech’s Mike Brown went to work on Europa using near-infrared data from the Keck II instrument on Mauna Kea. The hydrogen peroxide they found is some 20 times more diluted than what you might buy at the local drugstore, and it’s unevenly distributed on the surface. Here it’s important to remember that Europa is locked to Jupiter — it rotates on its axis once for every 86 hour orbit around the planet — so its hemispheres keep the same orientation toward Jupiter and, importantly, the radiation environment in the magnetosphere. In terms of hydrogen peroxide, the highest concentration (0.12 percent relative to water) is to be found on the leading side; i.e., the side that leads in Europa’s orbit around Jupiter. The side that faces backward in the moon’s orbit shows a concentration of peroxide that drops off to close to zero.

The work also shows that peroxide is at its highest concentration in areas where the ice is nearly pure water, a fact discussed in the paper, which ran in Astrophysical Journal Letters. It was the Galileo mission that first detected hydrogen peroxide on Europa, and the new work adjusts our view of its distribution. In the passage below, NIMS refers to the Galileo spacecraft’s Near-Infrared Spectrometer, which made the hydrogen peroxide detection:

…we note that the radiolytic production of surface oxidants has long been of interest in the context of Europa’s subsurface ocean chemistry (Gaidos et al. 1999; Chyba 2000; Chyba & Hand 2001). If Europa’s oxidant laden surface ice mixes with the ocean water then radiolysis could be a key mechanism for maintaining a chemically-rich and potentially habitable ocean (Chyba 2000; Hand et al. 2009). Previous estimates all assumed a globally uniform layer of peroxide within the ice layer and calculated delivery rates based the NIMS concentration of 0.13% relative to water.

But now we learn that the distribution is not globally uniform:

Our new results indicate that only the most ice-rich regions of Europa reach the concentrations measured by NIMS. The trailing hemisphere concentration is nearly an order of magnitude lower than the leading hemisphere and the sub- and anti-Jovian hemispheres are down by a factor of ∼3 relative to the leading hemisphere. As a result, the average global surface abundance of peroxide in the surface ice of Europa may be better represented by the sub- and anti-Jovian hemisphere concentrations of ∼0.044%. This reduces the low-end estimate of Chyba & Hand (2001) from ∼ 109 moles per year peroxide delivered to the ocean to ∼ 108 moles per year delivered.

Given its importance for the habitability of the global ocean, the more we learn about hydrogen peroxide and its distribution, the better. We’re refining the Galileo results, but hampered by the lack of resources in the Jovian system — the paper goes on to point out that the cold water ice regions of the poles are not readily observable from Earth. But the work lowers our estimates of the total oxidants delivered to the ocean, assuming that there is indeed exchange of material between the surface ice and the water below. The case for a habitable ocean is still there to be made, but until we know more about delivery mechanisms, we’re left with huge imponderables.