The Era of Planet Gathering

We’ve looked at a couple of exoplanet issues this week that bear further comment. The first is that different detection methods can be usefully combined to cover different scenarios. If radial velocity works best with larger planets closer to their star, direct imaging takes us deep into the outer planetary system. We saw yesterday how both imaging and radial velocity could be used to probe subgiant stars. We routinely use RV as a check on transiting planet candidates. And gravitational microlensing can find planets at a wide range of separation from their primary.

I think microlensing has plenty to teach us, though I’m sensitive to the criticism voiced in comments here that we’re dealing with non-repeating events when we have a microlensing detection. Centauri Dreams reader coolstar has also noted that distance may be a factor, questioning whether some of the resources by way of telescope hardware that we’re putting into microlensing studies wouldn’t be better employed looking at nearby worlds. After all, a new paper by Timothy Morton and Jonathan Swift makes the case that small planets around M-dwarfs are even more plentiful than recent studies reported here have shown. Maybe we should be putting more of an effort into finding these through transit studies?

If different detection methods each have their uses, radically different classes of telescope can likewise probe for planets. John Johnson (Caltech) heads up Project Minerva, a telescope array dedicated to Earth-like planets around nearby stars. The plan is to use small-aperture robotic telescopes atop Palomar Mountain to perform photometry and high-resolution spectroscopy, making it, according to Caltech’s site on the project, “the first U.S. observatory dedicated to exoplanetary science capable of both precise radial velocimetry and transit studies.” Following an initial design review, the project has now seen delivery of the enclosure for its telescopes. 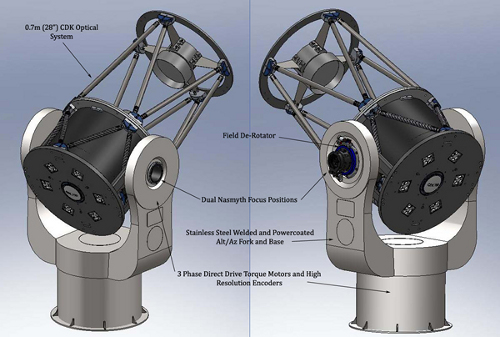 Image: Minerva’s hardware. Minerva will be an array of small-aperture robotic telescopes to be built atop Palomar Mountain outfitted for both photometry and high-resolution spectroscopy. It will be the first U.S. observatory dedicated to exoplanetary science capable of both precise radial velocimetry and transit studies. The multi-telescope concept will be implemented to either observe separate targets or a single target with a larger effective aperture. The flexibility of the observatory will maximize scientific potential and also provide ample opportunities for education and public outreach. The design and implementation of MINERVA will be carried out by postdoctoral and student researchers at Caltech. Credit: Caltech/John Johnson.

TESS, the Transiting Exoplanet Survey Satellite, stands as a logical follow-on to the Kepler mission because it takes the hunt to nearby stars even as Kepler’s candidate totals push on toward 3000. But as we wait for new instruments to come online, including the upcoming James Webb Space Telescope and ground-based systems like the European Extremely Large Telescope, it’s great to see grad students like Johnson’s Exolab crew coming up with solutions like Minerva. It’s an inexpensive effort that could gain real traction, and as Johnson told one reporter, “If we lived in an ideal world, we wouldn’t do Minerva because we’d have money from our funding agencies.” But then, who ever said it was an ideal world?

Minerva had a poster devoted to it at the most recent meeting of the American Astronomical Society. The plan is to use an array of four instruments, each with a 0.7-meter mirror, that will over a period of three years scan stars within about 75 light years of the Earth. To get a look at it, see Unblinking Baby Telescopes Will Hunt Exoplanets for Cheap, a recent piece that explains the project this way:

The Minerva telescopes will look for a slight wobble that indicates a planet is tugging gravitationally on those stars. Using this data, [graduate student Kristina] Hogstrom said that her team expects to find around a dozen new local planets, most of them two to three times the size of Earth and a few of them orbiting in the habitable zone where liquid water could exist. The project will also find Earth-sized planets and perhaps smaller, but these will likely orbit too close to their parent star to host life.

What I like about this, and I can see why Centauri Dreams readers find it interesting, is that it’s a dedicated exoplanet project that, Kepler-like, stares at a designated number of stars. The article quotes Johnson as saying that astronomers aren’t really in planet ‘hunting’ mode these days so much as engaged in routine planet ‘gathering,’ which tells you how far we’ve come in this remarkable enterprise in the few short years since 1995, when the announcement of the first planet discovered orbiting a main sequence star was made by Michel Mayor and Didier Queloz, to be quickly confirmed by Geoff Marcy and Paul Butler.

So here we are with off-the-shelf hardware and a custom-built spectrometer, running up a tab of about $3.5 million as compared to the $600 million that the relatively cheap space-based Kepler cost. We’re probably less than a year away from the datastream beginning to flow at the Minerva site. Modest funding and limited resources used imaginatively in arrays of small dedicated telescopes may be forced upon us by circumstance, but we’re learning that good science can flow from such projects and private institutions can find ways to fund them.