Last week’s post about the chemistry of Europa’s ocean is nicely complemented by new work on the moon’s interior by Brad Dalton (JPL) and colleagues. Like JPL’s Kevin Hand, who has been looking at the role of hydrogen peroxide in possible subsurface life there, Dalton is in the hunt for ways to learn more about the composition of Europa’s ocean. Both scientists have been using data from the Galileo mission, refining its results to produce new insights.

Usefully, the surface chemistry on Europa is affected by the charged particles continually striking the tiny world. That allows us to get a read on which parts of Europa would be the best targets for future spacecraft missions, for Dalton’s work helps us find the places where charged particles have had the smallest impact. It’s there — on parts of the leading hemisphere in Europa’s orbit — that material from within the ocean is most likely to be found in pristine condition, with the least chemical processing by incoming charged electrons and ions.

Here’s the mechanism: Europa keeps the same side toward Jupiter as it moves around the planet in its orbit. At the same time, Jupiter’s magnetic field is tugging ions of sulfur and oxygen from Io along the same path, as well as charged energetic particles that move much faster than Europa’s 3.6-day orbit. What happens is that the trailing hemisphere of Europa winds up with more sulfuric acid, apparently the result of sulfur ions bombarding the surface. Dalton’s team takes those earlier Galileo observations further by looking at five different parts of the surface. 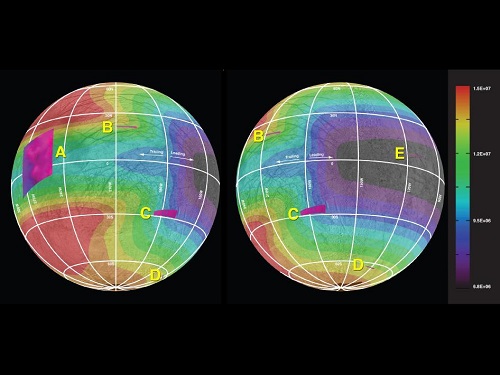 Image: This graphic of Jupiter’s moon Europa maps a relationship between the amount of energy deposited onto the moon from charged-particle bombardment and the chemical contents of ice deposits on the surface in five areas of the moon (labeled A through E). Energetic ions and electrons tied to Jupiter’s powerful magnetic field smack into Europa as the field sweeps around Jupiter. The magnetic field travels around Jupiter even faster than Europa orbits the planet. Most of the energetic particles hitting Europa strike the moon’s “trailing hemisphere,” the half facing away from the direction Europa travels in its orbit. The “leading hemisphere,” facing in the direction of travel, receives fewer of the charged particles. Credit: NASA/JPL-Caltech/Univ. of Ariz./JHUAPL/Univ. of Colo.

Hydrated sulfuric acid and hydrated sulfate salts can be distinguished from water ice by the spectra gathered by Galileo’s Near-Infrared Mapping Spectrometer. Dalton and team are looking at the reflected light from frozen material on the surface, and comparing what they see with their models of what the particle bombardment from Jupiter and Io should produce. It turns out that sulfuric acid varies from undetectable levels near the center of the leading hemisphere to more than half of the surface materials near the center of the trailing hemisphere. The amount of electrons and sulfur ions hitting the surface shows a close correlation with this result.

So whatever chemical compounds may originally have erupted from the interior onto the surface, they’re most likely to be found unchanged on the leading edge. Says Dalton:

“The darkest material, on the trailing hemisphere, is probably the result of externally-driven chemical processing, with little of the original oceanic material intact. While investigating the products of surface chemistry driven by charged particles is still interesting from a scientific standpoint, there is a strong push within the community to characterize the contents of the ocean and determine whether it could support life. These kinds of places just might be the windows that allow us to do that.”

Europa is going to be a tough environment to work in given its high radiation environment. But work in it we must, because although oceans are also possible on Ganymede and Callisto, it’s Europa that seems to have thinnest crust, making it more likely that oceanic materials are preserved in frozen form on the surface there. To continue the investigation of Europan landing sites for future probes, another recent paper by Edward Sittler (University of Maryland) and team on plasma ion measurements near Europa makes that case that we need a 3-D model of the interactions between moon and magnetosphere to develop a global view of the electric and magnetic fields and the associated plasma environment our probes will have to work in.