Water Worlds in the Habitable Zone

“The fault, dear Brutus, is not in our stars,
But in ourselves, that we are underlings.”

Thus Cassius speaking to Brutus in Shakespeare’s Julius Caesar, trying to convince him that what happens to us comes not from some malign fate but from our own actions. I’m sure he’s right, too, but I admit there are days when I wonder. For the stars seem aligned in such a way that whenever there is a significant news conference about exoplanets, I have a schedule conflict. This is true yet again today, so that I’m writing before the NASA-hosted news briefing and will have to set this up to post automatically after the embargo expires.

Here, though, are the main points. We have found Kepler 62f, an interesting world about 1.4 times the size of Earth and most likely rocky. When you add up the other known facts about the planet, the attention builds. Discovered through Kepler data in the constellation Lyra, this world receives about half the heat and radiation that the Earth does, while orbiting its star every 267.3 days. The University of Washington’s Eric Agol lays out the case for this intriguing planet:

“The planets this small that we have found until now have been very close to their stars and much too hot to be possibly habitable. This is the first one Kepler has found in the habitable zone that satisfies this small size. Kepler 62f is the smallest size and the most promising distance from its star, which by these measures makes it the most similar exoplanet to Earth that has been found by Kepler.”

The best guess — and remember that we lack knowledge of Kepler 62f’s mass and density — is that we’re looking at a rocky world with an atmosphere, but Agol doubts it’s a thick gaseous envelope like Neptune’s. We seem to be looking at a planet a bit larger and somewhat cooler than the Earth, and it’s not alone in this system, where four other planets are known to exist. One of these, Kepler 62e, is a fellow traveler in the star’s habitable zone. It’s about 1.61 times the size of Earth and orbits every 122.4 days, giving it 20 percent more stellar flux than the Earth. 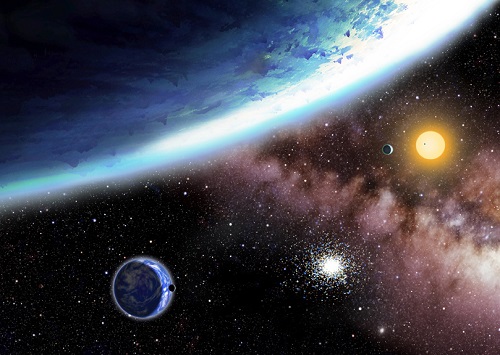 Image: The newly discovered planets named Kepler 62e and f are super-Earths in the habitable zone of a distant sun-like star. The largest planet in the image, Kepler 62f, is farthest from its star and covered by ice. Kepler 62e, in the foreground, is nearer to its star and covered by dense clouds. Closer in orbits a Neptune-size ice giant with another small planet transiting its star. Both habitable-zone planets may be capable of supporting life. Credit: David A. Aguilar (CfA)

Two small super-Earths in the habitable zone make for understandable excitement. Modeling at the Harvard-Smithsonian Center for Astrophysics (CfA) suggests that both these planets are water worlds, completely covered with a global ocean. Might they have life? Lisa Kaltenegger (Max Planck Institute for Astronomy/CfA) speculates:

“These planets are unlike anything in our solar system. They have endless oceans. There may be life there, but could it be technology-based like ours? Life on these worlds would be under water with no easy access to metals, to electricity, or fire for metallurgy. Nonetheless, these worlds will still be beautiful blue planets circling an orange star — and maybe life’s inventiveness to get to a technology stage will surprise us.”

Kepler 62 is a class K star somewhat smaller and cooler than the Sun. According to the CfA’s models, Kepler 62e should be cloudier than the Earth, while the cooler Kepler 62f would need to take advantage of the greenhouse effect from carbon dioxide in the atmosphere to keep it warm enough for the ocean to remain liquid. Harvard’s Dimitar Sasselov notes in this CfA news release that discoveries like this raise the prospect of other stars with not one but two planets in the habitable zone. That conjures up what until recently was our view of the Solar System, when not so many decades ago we used to believe Venus and Mars might each be habitable worlds.

I think Sasselov is right to linger over this thought. These may be water worlds and most likely would not develop technological civilizations, but imagine a system where two worlds with continents and oceans, worlds much like Earth, existed close to each other in the habitable zone, each highly visible to the other. Surely the inhabitants of planets like these, with the prospect of a truly colonizable world this close, would be impelled to make the crossing.

The other planets around this star? Kepler 62 b, c and d are 1.31, 0.54 and 1.95 times the size of the Earth, respectively, all orbiting the star too tightly to be in the habitable zone. For more, see this University of Washington news release. Kaltenegger and Sasselov’s work is to be published in The Astrophysical Journal, while Agol is second author of the discovery paper published online in Science today as Borucki et al., “Kepler-62: A Five-Planet System with Planets of 1.4 and 1.6 Earth Radii in the Habitable Zone” (abstract).