Thoughts on Kepler 62 and Habitability

Because we only have direct images of a tiny number of planets orbiting other stars, we’re used to extrapolating as much as we can from our data and plugging in possible scenarios. But as the recent announcement of two ‘super-Earths’ around Kepler 62 demonstrates, we’re coming up hard against the limits of our knowledge. The comments on my recent story on the Kepler find bring up Greg Laughlin’s always interesting systemic site and a post he made in early April. Laughlin (UC-Santa Cruz) is worth reading not only for his shrewd analysis but for the sheer brio he brings to the exoplanet hunt. And here he sounds a note of caution:

I think we currently have substantially less understanding of the extrasolar planets than is generally assumed. Thousands of planets are known, but there is no strong evidence that any of them bear a particular resemblance to the planets within our own solar system. There’s always a tendency, perfectly encapsulated by the discipline of astrobiology, with its habitable zones and its preoccupation with water — to make wild extrapolations into the complete unknown.

Many Centauri Dreams readers don’t read the comments after each post, so I wanted to get that sentiment out in plain sight. One of the problems Laughlin notes is that if you plot the mass-radius relationships for super-Earths, you get numerous possibilities based on what we have found so far. We find what Laughlin calls a ‘huge range in apparent planetary structures’ here. Little more needs to be said: We’re tempted to look for clement conditions for astrobiology but we have to be careful that we don’t read our own hopes into still ambiguous results. 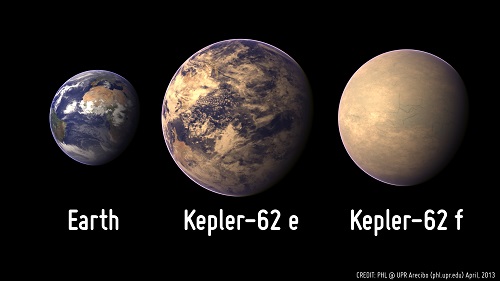 Image: A size comparison of Kepler 62 e and f as measured against the Earth. How much do the images contain our own hopes for astrobiology as opposed to what we really know? Credit: Planetary Habitability Laboratory.

Using data from the Allen Telescope Array, the SonATA program (SETI on the ATA) has continued to run a SETI search that focuses on Kepler candidates, especially those thought to be in the habitable zone of their stars. A recent news release homes in on the Kepler 62 finds, though with a caution that rings true in relation to Laughlin’s thoughts above. Clearly, Center for SETI Research head Gerry Harp would love to point his equipment at worlds with water on the surface, but in the case of Kepler 62 the mass of both habitable zone planets is unknown because they’re too small and too far away to analyze their gravitational effects on the host star.

Jon Jenkins, senior scientist at the Carl Sagan Center of the SETI Institute, is thus wise to take a measured approach:

“These discoveries move us farther down the road to discovering planets similar to Earth. While we don’t know if Kepler 62e and f are rocky or whether they have liquid water pooling on their surfaces, their existence shows that the incidence of small worlds in the habitable zone of sun-like stars is high. Thus we can look forward to the discovery and detailed characterization of Earth’s cousins in the years and decades to come by future missions and telescopes.“

And that seems like a legitimately cautious take-away from the Kepler 62 work. Of the five planets thus far identified around the star, two super-Earths seem to be in the habitable zone, but we can’t push definitively beyond that. The good news, as Laughlin notes on systemic, is that with the approval of TESS (Transiting Exoplanet Survey Satellite), we’re going to be discovering transiting super-Earths around the few million brightest stars close enough for detailed radial velocity follow-up, all of this within a scant ten years. TESS will provide the data we need to get a better understanding of the mass-radius relationships about which we have so many questions.

And while we’re talking exoplanets, let me take note of the TRENDS project (TaRgeting bENchmark-objects with Doppler Spectroscopy) being led by Justin Crepp (Notre Dame). Caltech’s John Johnson heads up Project Minerva at the university’s Exolab, recently described here as a telescope array dedicated to Earth-like planets around nearby stars, one capable of both radial velocimetry and transit studies. Crepp worked with Johnson as a postdoc and is now, like his mentor, combining exoplanet detection methods. TRENDS uses radial velocity measurements to identify promising targets for high-contrast imaging observations.

Initial results here are promising. The TRENDS team has discovered low-mass stellar companions orbiting HD 53665, HD 68017, and HD 71881 using NIRC2 adaptive optics (AO) observations. Its follow-up imaging has demonstrated common proper motion; i.e., co-moving companion objects with estimated spectral-types of K7–M0, M5, and M3–M4 respectively. These three M-dwarf companions could be found in the long-term Doppler trends of the host stars and the follow-up work at Keck then allowed their direct detection. From the paper:

Few mass, age, and metallicity benchmark dwarfs are known to date (Liu et al. 2007; Dupuy et al. 2010; Bowler et al. 2012a,b). The goal of the TRENDS high-contrast imaging program is to discover and characterize low-mass stellar and substellar companions with physical properties determined independently from spectro-photometric measurements, in order to calibrate theoretical atmospheric models and thermal evolutionary models. Each of the companions presented are amenable to direct spectroscopy using AO-fed integral-ﬁeld units, such as OSIRIS at Keck or Project 1640 at Palomar.

This kind of news doesn’t drive the headlines, but we’re looking at important work. Crepp’s team is coming up with metallicity and age benchmarks, and further observation should produce mass benchmarks as well. Moreover, Johnson called my attention to another paper in which Crepp and colleagues characterize the brown dwarf HR7672B, establishing it as a “rare and precious ‘benchmark’ brown dwarf with a well-determined mass, age, and metallicity…” This is how you test your knowledge of the spectral and evolutionary models we need to make sense of what we see. Combining radial velocity and direct imaging clearly yields powerful new analysis.

The TRENDS work demonstrates improved ways to use our tools at the same time that it reminds us how much we have to learn. There is a raw excitement in pushing our methodologies in such synergistic ways. As we look forward to what projects like TESS will reveal in a few short years, we should keep in mind what while those Earth analogues are surely out there, tuning up our techniques will enable discoveries we haven’t begun to anticipate.