Starship Musings: Warping to the Stars

The executive director of the Institute for Interstellar Studies here gives us his thoughts on Star Trek and the designing of starships, with special reference to Enrico Fermi. Kelvin is also Chief Editor for the Journal of the British Interplanetary Society, whose latest conference is coming up. Youâ€™ll find a poster for the Philosophy of the Starship conference at the end of this post. 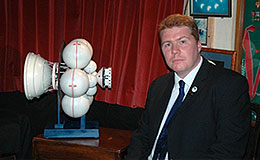 Like many, I have been inspired and thrilled by the stories of Star Trek. The creation of Gene Roddenberry was a wonderful contribution to our society and culture. I recently came across an old book in the shop window of a store and purchased it straight away. The book was titled The Making of Star Trek, The book on how to write for TV!, by Stephen E.Whitfield and Gene Roddenberry. It was published by Ballantine books in 1968 â€“ the same year that the Stanley Kubrick and Arthur C Clarke 2001: A Space Odyssey came out. What with all this and Project Apollo happening, the late 1960s was a time to have witnessed history. Pity I wasnâ€™t born until the early 1970s when the lunar program was winding down. I digressâ€¦

In this book, one finds the story of how Roddenberry tried to market his idea for a new type of television science fiction show. It is clear from reading it that Roddenberry was very much concerned for humankind and in the spirit of Clarkeâ€™s positive optimism, he was trying to steer us down a different path. In this book we find out many wonderful things about the origins of Star Trek, including that the U.S.S Enterprise was originally called the U.S.S Yorktown and that Captain James T.Kirk was originally Captain Robert T. April. He was described as being â€śmid-thirties, an unusually strong and colourful personality, the commander of the cruiserâ€ť.

The time period that Star Trek was said to be set was sometime between 1995 and 2995, close enough to our times for our continuing cast to be people like us, but far enough into the future for galaxy travel to be fully established. The Starship specifications were given as cruiser class, gross mass 190,000 tons, crew department 203 persons, propulsion drive space warp, range 18 years at light-year velocity, registry Earth United Spaceship. The nature of the mission was galactic exploration and investigation and the mission duration was around 5 years. Reading these words today, we see that what Roddenberry was doing was laying the foundations for many future visions of what starships would be like.

To Craft a Starship

What I found absolutely fascinating about reading this book however, was the process by which Roddenberry and team actually came up with the U.S.S Enterprise design. Roddenberry met with the art department and in the summer of 1964 the design of the starship was finalised. The art directors included Pato Guzman and Matt Jefferies. Roddenberryâ€™s instructions to the team on how to design the U.S.S Enterprise were clear:

â€śWeâ€™re a hundred and fifty or maybe two hundred years from now. Out in deep space, on the equivalent of a cruise-size spaceship. We donâ€™t know what the motive power is, but I donâ€™t want to see any trails or fire. No streaks of smoke, no jet intakes, rocket exhaust, or anything like that. Weâ€™re not going to Mars, or any of that sort of limited thing. It will be like a deep-space exploration vessel, operating throughout our galaxy. Weâ€™ll be going to stars and planets that nobody has named yetâ€ť. He then got up and, as he started for the door, turned and said, â€śI donâ€™t care how you do it, but make it look like itâ€™s got powerâ€ť.

According to Jefferies, the Enterprise design was arrived at by a process of elimination and the design even involved the sales department, production office and Harvey Lynn from the Rand Corporation. The various iterations produced many sheets of drawings â€“ I wonder what happened to those treasures? The book shows some of the earlier concepts the team came up with.

Today, many in the general public take interstellar travel for granted, because Star Trek makes it look so easy with its warp drives and antimatter powered reactions. But for those of us who try to compute the problem of real starship design, we know the truth â€“ that it is in fact extremely difficult. Whether you are sending a probe via fusion propulsion, laser driven sails or other means, the velocities, powers, energies are unreasonably high from the standpoint of todayâ€™s technology. But it is the dream of travelling to other stars through programs like Star Trek that keeps our candles burning late into the night as we calculate away at the problems. In time, I am sure we will prevail.

There is an element of developing warp drive theory however that is usually neglected and I think it is now time to raise it â€“ the implications to the Fermi Paradox. This is the calculation performed by the Italian physicist Enrico Fermi around 1950 that given the number of stars in the galaxy, their average distance, spectral type, age and how long it takes for a civilization to grow â€“ intelligent extraterrestrials should be here by now, yet we donâ€™t see any. Over the years there have been many proposed solutions to the Fermi paradox. In 2002 Stephen Webb published a collection of them in his book If the Universe is Teeming with Aliensâ€¦Where is Everybody? Fifty Solutions to the Fermi Paradox and the Problem of Extraterrestrial Life, published by Paxis.

One of the ways to address this is to ask if interstellar travel was even feasible in theory, and as discussed in my recent Centauri Dreams post on the British Interplanetary Society, Project Daedalus proved that it was. If you can design on paper a machine like Daedalus at the outset of the space age, what could you do in two or three centuries from now?

But even then travel times across the galaxy would be quite slow. The average distance between stars is around 5 light years, the Milky Way is 1,000 light years thick and 100,000 light years in diameter. Travelling at around ten percent of the speed of light the transit times for these distances would be 50 years, 10,000 years and 1 million years respectively. These are still quite long journeys and the probability of encountering another intelligent species from one of the 100-400 billion stars in our galaxy may be low. But what if you have a warp drive?

The warp drive would permit arbitrarily large multiple equivalents of the speed of light to be surpassed, so that you could reach distances in the galaxy fairly quickly. Just like Project Daedalus had to address whether interstellar travel was feasible as an attack on the Fermi Paradox problem, so the warp drive is yet another question â€“ are arbitrarily large speeds possible, exceeding even the speed of light?

If so, then our neighbourhood should be crowded by alien equivalents of the first Vulcan mission that landed on Earth in the Star Trek universe. To my mind, if we can show in the laboratory that warp drive is feasible in theory as a proof of principle, and yet we donâ€™t discover intelligent species outside of the Earthâ€™s biosphere, then of the many solutions to the Fermi paradox, perhaps there are only two remaining. The first would be some variation on the Zoo hypothesis, and the second is that we are indeed alone on this pale blue dot called Earth. Take your pick what sort of a Universe you would rather exist in. 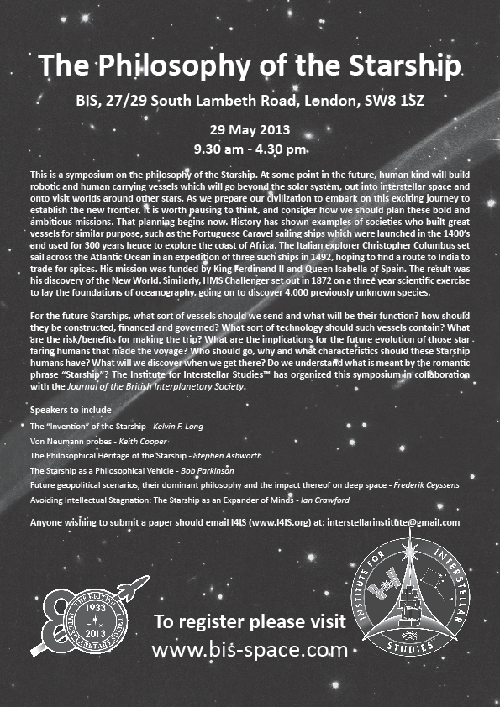