Astronautics pioneer Robert H. Goddard is usually thought of in connection with liquid fuel rockets. It was his test flight of such a rocket in March of 1926 that demonstrated a principle he had been working on since patenting two concepts for future engines, one a liquid fuel design, the other a staged rocket using solid fuels. “A Method of Reaching Extreme Altitudes,” published in 1920, was a treatise published by the Smithsonian that developed the mathematics behind rocket flight, a report that discussed the possibility of a rocket reaching the Moon.

While Goddard’s work could be said to have anticipated many technologies subsequently developed by later engineers, the man was not without a visionary streak that went well beyond the near-term, expressing itself on at least one occasion on the subject of interstellar flight. Written in January of 1918, “The Ultimate Migration” was not a scientific paper but merely a set of notes, one that Goddard carefully tucked away from view, as seen in this excerpt from his later document “Material for an Autobiography” (1927):

“A manuscript I wrote on January 14, 1918 … and deposited in a friend’s safe … speculated as to the last migration of the human race, as consisting of a number of expeditions sent out into the regions of thickly distributed stars, taking in a condensed form all the knowledge of the race, using either atomic energy or hydrogen, oxygen and solar energy… [It] was contained in an inner envelope which suggested that the writing inside should be read only by an optimist.”

Optimism is, of course, standard currency in these pages, so it seems natural to reconsider Goddard’s ideas here. As to his caution, we might remember that the idea of a lunar mission discussed in “A Method of Reaching Extreme Altitudes” not long after would bring him ridicule from some elements in the press, who lectured him on the infeasibility of a rocket engine functioning in space without air to push against. It was Goddard, of course, who was right, but he was ever a cautious man, and his dislike of the press was, I suspect, not so much born out of this incident but simply confirmed by it.

In the event, Goddard’s manuscript remained sealed and was not published until 1972. What I hadn’t realized was that Goddard, on the same day he wrote the original manuscript, also wrote a condensed version that David Baker recently published for the British Interplanetary Society. It’s an interesting distillation of the rocket scientist’s thoughts that speculates on how we might use an asteroid or a small moon as the vehicle for a journey to another star. The ideal propulsion method would, in Goddard’s view, be through the control of what he called ‘intra-atomic energy.’ 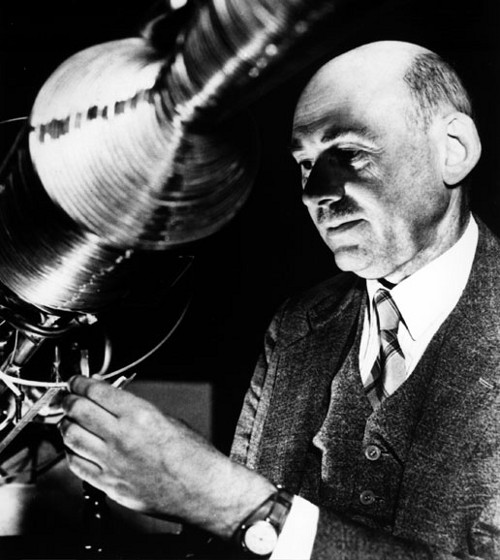 Atomic propulsion would allow journeys to the stars lasting thousands of years with the passengers living inside a generation ship, one in which, he noted, “the characteristics and natures of the passengers might change, with the succeeding generations.” We’ve made the same speculation here, wondering whether a crew living and dying inside an artificial world wouldn’t so adapt to the environment that it would eventually choose not to live on a planetary surface, no matter what it found in the destination solar system.

And if atomic energy could not be harnessed? In that case, Goddard speculated that humans could be placed in what we today would think of as suspended animation, the crew awakened at intervals of 10,000 years for a passage to the nearest stars, and intervals of a million years for greater distances. Goddard speculates on how an accurate clock could be built to ensure awakening, which he thought would be necessary for human intervention to steer the spacecraft if it came to be off its course. Suspended animation would involve huge changes to the body:

…will it be possible to reduce the protoplasm in the human body to the granular state, so that it can withstand the intense cold of interstellar space? It would probably be necessary to dessicate the body, more or less, before this state could be produced. Awakening may have to be done very slowly. It might be necessary to have people evolve, through a number of generations, for this purpose.

As to destinations, Goddard saw the ideal as a star like the Sun or, interestingly, a binary system with two suns like ours — perhaps he was thinking of the Alpha Centauri stars here. But that was only the beginning, for Goddard thought in terms of migration, not just exploration. His notes tell us that expeditions should be sent to all parts of the Milky Way, wherever new stars are thickly clustered. Each expedition should include “…all the knowledge, literature, art (in a condensed form), and description of tools, appliances, and processes, in as condensed, light, and indestructible a form as possible, so that a new civilisation could begin where the old ended.”

The notes end with the thought that if neither of these scenarios develops, it might still be possible to spread our species to the stars by sending human protoplasm, “…this protoplasm being of such a nature as to produce human beings eventually, by evolution.” Given that Goddard locked his manuscript away, it could have had no influence on Konstantin Tsiolkovsky’s essay “The Future of Earth and Mankind,” which in 1928 speculated that humans might travel on millennial voyages to the stars aboard the future equivalent of a Noah’s Ark.

Interstellar voyages lasting thousands of years would become a familiar trope of science fiction in the ensuing decades, but it is interesting to see how, at the dawn of liquid fuel rocketry, rocket pioneers were already thinking ahead to far-future implications of the technology. Goddard was writing at a time when estimates of the Sun’s lifetime gave our species just millions of years before its demise — a cooling Sun was a reason for future migration. We would later learn the Sun’s lifetime was much longer, but the migration of humans to the stars would retain its fascination for those who contemplate not only worldships but much faster journeys.